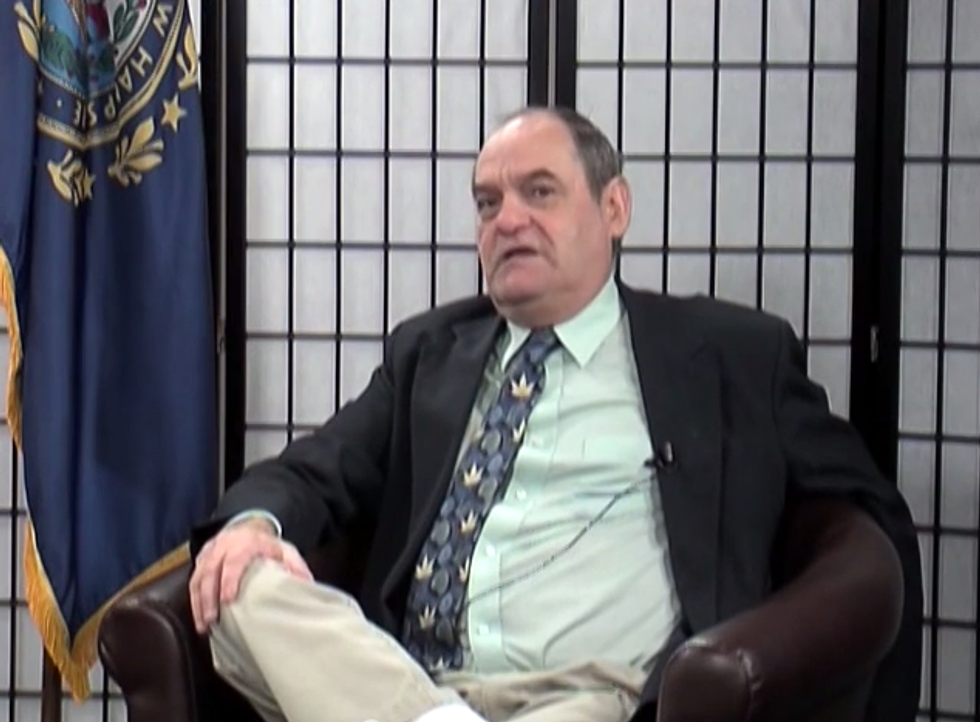 It's a good thing feminists have killed patriarchy forever, or else we might be subjected to hideously ugly men insisting that elections are only for hot chicks. Oh wait! New Hampshire state Rep. Steve Vaillancourt (R-OF COURSE) didn't get that memo. He recently took to his blog to share his electoral insights on the House race in his states 2nd Congressional District between Republican Marilinda Garcia and Democratic incumbent Ann McLane Kuster.

Let's be honest. Does anyone not believe that Congressman Annie Kuster is as ugly as sin? And I hope I haven't offended sin.

If looks really matter and if this race is at all close, give a decided edge to Marilinda Garcia. [...]

Annie Kuster looks more like a drag queen than most men in drag.

We hate to disagree with you, stud, but polling has consistently shown Rep. Kuster with a hefty lead, which implies that you are wrong about a great many things. Like how New Hampshire voters didn't think Kuster was too sinfully ugly to elect her in the last election, and what with that hefty lead we just mentioned, they don't think it's a problem this time around either. There is one poll that shows Garcia slightly ahead, and the rightosphere is VERY excited about it. Too bad the poll was conducted by the University of New Hampshire Survey Center, whose numbers bounce up and down like a meth addict, which is why Serious Election Nerds don't take them very seriously at all. So we wouldn't place all our bets on their latest calculations just yet.

I don't plan to say anything really offensive here...certainly nothing like the reference to the recent Saturday Night Live skit about doing "it" for a million dollars...but the subject matter, although very real, may prove uncomfortable for some of my more sensitive readers. Thus, to avoid the PC police sending out a warrant for my arrest, I offer an advance warning.

What could possibly be offensive about saying a member of Congress is so damned ugly, there's no way she could win an election, even though she has already won an election and has a pretty solid chance of winning this one too? Hmm ... nope, nothing comes to mind.

Although, come to think of it, Vaillancourt's preferred candidate might find it offensive. She really doesn't like when politicians talk about women. It's "insulting," which is why she cannot stand how Democrats are always going on and on and on about chicks.

But Garcia might face distractions from her own preferred message. She once called women “emotional rollercoasters” during a 2007 floor speech on an abortion bill in the New Hampshire legislature — a remark that Democrats are likely to use against her as Election Day nears.

We assume Garcia will be condemning her fanboy's comments any second now. Unless she thinks "yeah, my opponent is ugly as sin" is a real issue voters want to talk about. Or maybe she doesn't think at all. Maybe she just feels. You know how chicks are so emotional, man.

We do have one question, though: Are they putting something in the water of low-level state politicians these days? Just last week, Missouri state Rep. Bill Lant took to his blog to whine about how the hot chick he'd fantasized about in high school algebra class no longer looked like a perky 16-year-old at the 50th reunion. Such a shame how ladies let themselves go with that whole aging process thing.

With all of these super-hot Republican men talking about how ugly the ladies are, we continue to be utterly and completely baffled as to how it is the Republican outreach to the ladies plan isn't working.