Uh Oh, We Almost Forgot To Thank The Menfolk For All This Awesome Equality 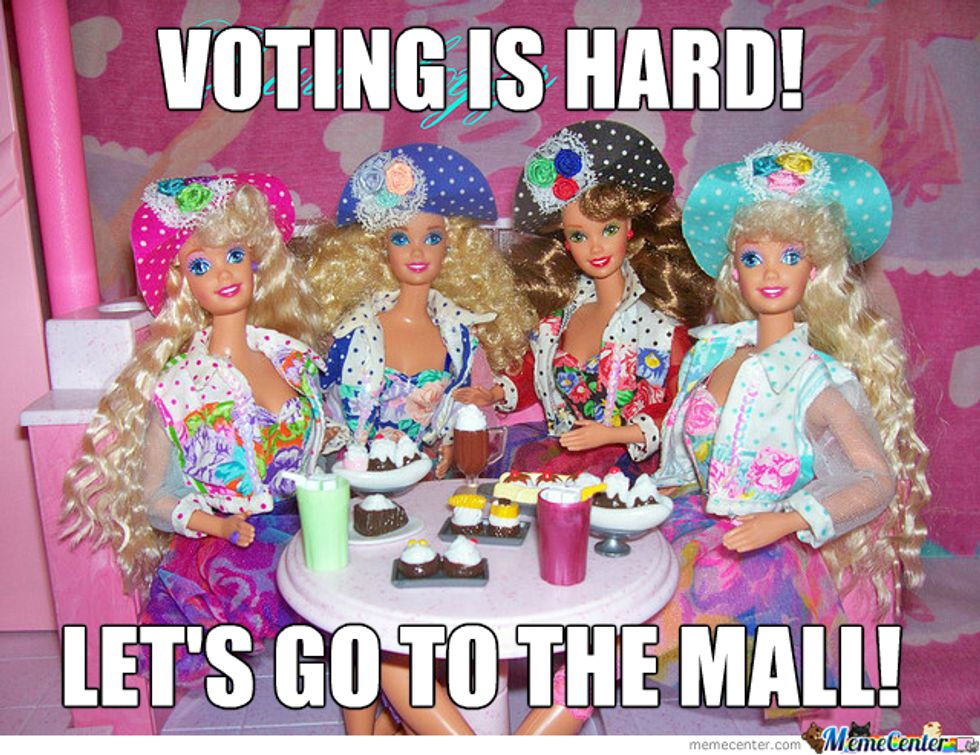 You know how we girls are

Aw, nut sack. What with doing our job all day, we almost forgot to take a moment to freshen up, slip into something pretty, fix you fellas a nice cocktail, and thank you OH SO MUCH for letting us vote. You know us girls! If it's not about shopping and babies, it just flies right out of our silly little girl brains. It's amazing we make it through the day at all!

In case you don't have it marked on your calendar, Aug. 26 is the day we remember how nice it was of all the boys to allow us into their little democracy club house. What are we talking about? Heck if we know! Let's ask a big strong man to explain it for us. Tell us what we're celebrating, President Obama:

On August 26, 1920, after years of agitating to break down the barriers that stood between them and the ballot box, American women won the right to vote. On the front lines of pickets and protests, champions from every corner of our country banded together to expand this fundamental freedom to women and forge a path toward fairer representation and greater opportunity. As we celebrate 95 years since the certification of the 19th Amendment, let us demonstrate our commitment to the belief that we are all entitled to equal treatment by supporting policies that help women succeed and thrive.

Oh yeah that. Yay us! Feminism! Grrl power! Vagina fist bumps all around! And now that we get to vote, huzzah, everything is equal and terrific, and Megyn Kelly has the right to bleed on TV, and Hillary Clinton gets to run for president again (unless the men decide it's too risky, you never know, GIRLS ARE SO FICKLE), and we get to boss around Evan (a man) and Doktor Zoom (another man) all day long!

We tried being all nice and sweet about it last year, remember?

Thank you, men, for letting us vote after we begged and pleaded and starved ourselves and got thrown in jail and also tried just asking nicely for, like, decades.

Thank you, men, for passing a law in 19-freakin'-63 that says you have to pay us just like you pay yourselves so we can buy all the SHOOOOOOOZ!, even though to this day we can only buy about 77 percent of them, but we are sure you are going to get around to that eventually.

Thank you, men, for letting us have credit in our own names the same year that The Sting won best picture at the Oscars. This also helps us buy 77 percent of the SHOOOOOOOZ!

Thank you, men, for always looking out for our best interests and making decisions for us about whether we do in fact want to have babies or not have babies because we are only ladies, after all, and cannot possibly understand the consequences of our actions the way you do, even when you "find no reliable data" to back up your conclusions.

Thank you, men, for asking the important questions our dumb lady brains would not even think to ask, like "Do Hillary's menstrual cankles make her too grandmotherly to be president?"

Thank you, men, for letting us know just how much our equality hurts your feelings and that #NotAllMen are something something blah blah blah derp belch whatever.

And finally, thank you, men, for letting us live in your country after we pop you out of our vaginas and give you life, and telling us that when Jesus wrote the Declaration of Independence and said that All Men Are Created Equal, he meant all men and ladies too, wink wink, even though he did not mean that until 1920, or 1963, or 1974, or whenever it is exactly that we achieved full equality -- it's just so hard to be certain, and you know how we ladies are with math -- and that is why we do not even need the Equal Rights Amendment because we have all the quality already. In fact, it's possible we have too much of it and should really give some of it back.

(Yes, we did just aggregate ourselves. Whatcha gonna do about it, dock our pay by 23 percent?)

So why are we being such a catty bitch about it, instead of dropping to our knees and giving you humjobs of gratitude? Oh right, because we did that last year, and yet some of you -- but yeah, yeah still Not All Men -- are like, "Heyyyyyyy, ladies, we're gonna take away your health care, you don't even need that, we gotta spend those bucks bombing countries, sorry not sorry."

So fuck that noise, no reason to be nice about it, especially since we've learned in the last few months that America really REALLY loves an asshole. You know the one. He cherishes women, hates bimbos? Yeah, we're talking about Donald J. That Guy.

Anyway. Sorry if we don't get too sexcited about it, on account of how we still don't even have full equality in the Constitution, and besides, we are tired and we've had a long hard day of making the bacon so we can bring it home and fry it up and then scrub the grease from the pan and then load the dishwasher and then mop the floor and then darn your socks and then call your mother for you.

But yeah. Thanks for letting us vote. That's cool.