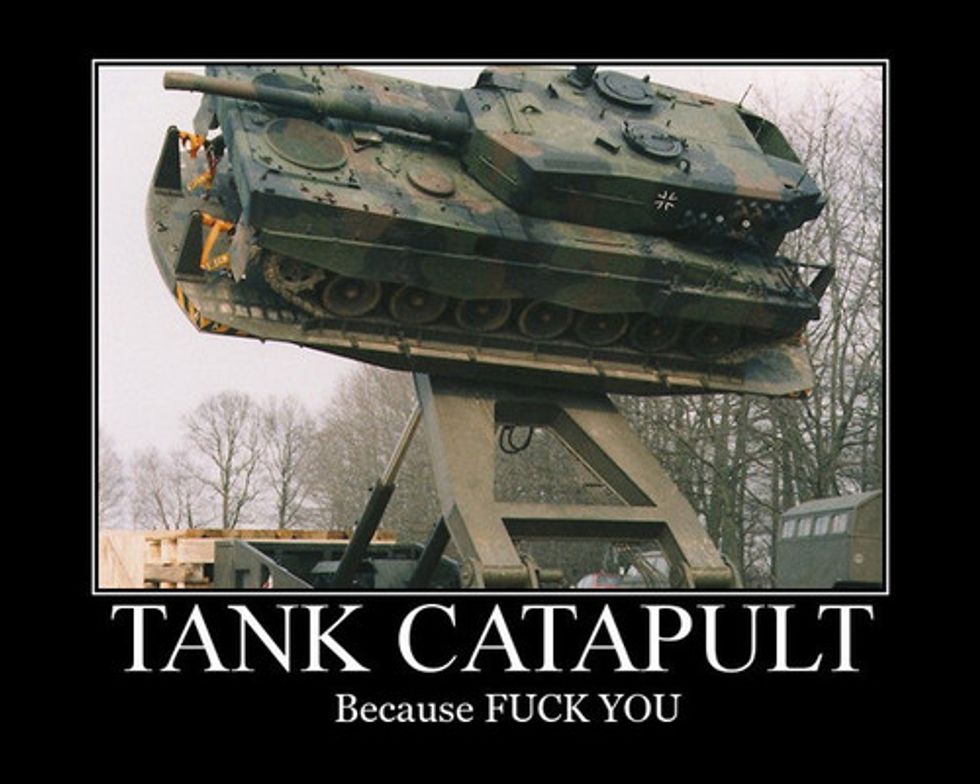 Sometimes, this "civility" thing may be just a little overrated. Consider, for instance, the awesomely unconcerned-about-fee-fees response of Houston's Gay LadyMayor Annise Parker to the homophobic idiot Phil Robertson: "What some redneck wingnut has to say about the GLBT community is completely irrelevant." And from "across the pond," a phrase which here means "in jolly old Blighty," there's Anna Soubry, a Defence Minister responsible for veterans and soldiers' welfare, who made some rather impolite comments about one Nigel Farage, the leader of the very, very rightwing UK Independence Party, a Libertarian fringe party that wants a flat tax, wants England out of the European Union, and doesn't believe in climate change because weren't you reading up to this point?

So anyway, the controversy: On some "breakfast television" programme -- in England, they call television "the lorry" -- Soubry reacted to comedian Rory Bremner's impersonation of Nigel Farage by saying:

"I always think he looks like somebody has put their finger up his bottom and he really rather likes it’."

Needless to say, Mr. Farage was all kinds of butthurt, though he denied this was in the literal sense. He also thought that all you cheeky monkeys should stop looking at his bum.

Farage said that Minister Sory's Conservative Party should be "deeply embarrassed" by the "foul-mouthed attack".

"Soubry has stooped to the levels of crudity that any politician would spend a life time apologising for. This is supposed to be a professional woman representing her political party on a national television programme on a Sunday morning," he said.

Soubry, unfortunately, did not take a cue from Annise Parker and say, well, jus look at his face! Instead, she issued one of those non-apology apologies for her remarks:

"If he is in any way offended, I apologise unreservedly. It was a light hearted remark."

Can we at least hope that she was still snickering when she said it? Such creative political insults should be encouraged, not squelched.

Also, too, here is a photograph of Mr. Farage. We will let you judge for yourself whether he looks like someone has put their finger up his bottom and he really likes it:

They may do things differently over there in the Manchester United States of Kingdom-Come, but over here in U.S. America, the truth is an absolute defense.

[Telegraph via a tip from Wonkette Operative "I.Z."]