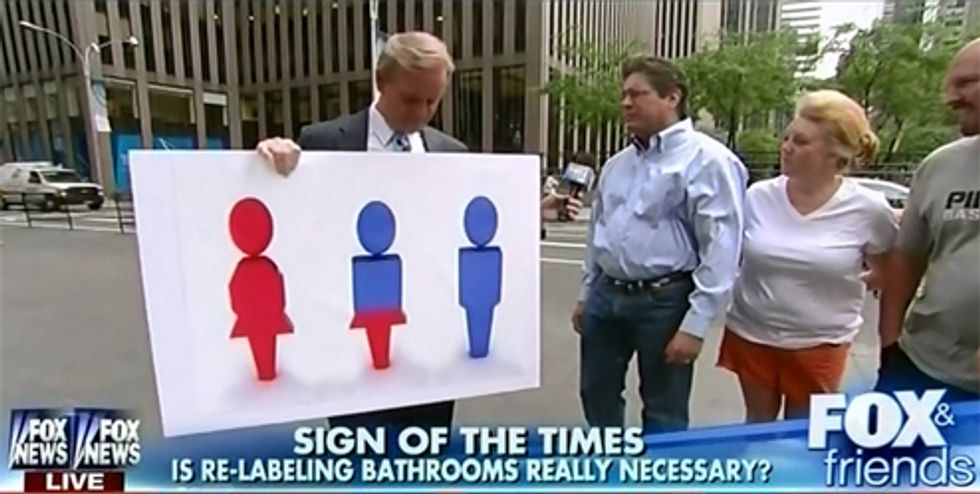 Poor Fox Newsdouche Steve Doocy clearly didn't prep his group of "Fox fans" well enough for this segment on Wednesday'sFox & Friends. The point of the segment was to profess shock and horror at the "PC Police" at Illinois State University, which recently announced it would be re-designating "family restrooms" as "all-gender" restrooms, and putting up new signs on the doors, which every single member of the Fox & Friends cast professed to be utterly impossible to understand, because what are these crazy PC lunatics trying to cram down our throats in the bathroom anyway?

So Doocy tested out a large replica of the sign on a group of visitors outside the Fox studios, and instead of being completely incapable of understanding the sign, a far too clever little boy in the group went and guessed that the sign maybe meant "family restroom," which, despite the game-show buzzer sound effect, was accurate enough. But Doocy was clearly disappointed that no one was especially shocked at his correction:

Doocy: See, they were designated as family restrooms in the past, and now apparently they're gonna be known as "all gender restrooms." Does that make sense?

Doocy: Right. Both genders. Or transgender.

Even when he was prompting them to look at the thoroughly perplexing middle figure, the nice Fox Fan in the blue shirt doesn't seem all that gobsmacked by a figure that's a combination of male and female iconography, and figures there has to be something more terrible about it, so he guesses, "I don't get the red and the blue...other than being politically correct."

So thank god, at least SOMEONE knows that this is an obvious example of political correctness run amok by, uh, saying that voters from red and blue states are both able to use the bathroom.

Back in the studio, Brian Kilmeade was astonished by the mental acuity of these people who somehow managed not to be bumfuzzled: "They're better people than us. I could not figure it out and we had the story in front of us. It makes no sense. Why is the torso so big, and the dress so small?"

Why, dear God, WHY!? Kilmeade then foamed at the mouth and went mad at the sight of the eldritch horror.