University Of California-Irvine Does Free Speech Bad, Should Feel Bad 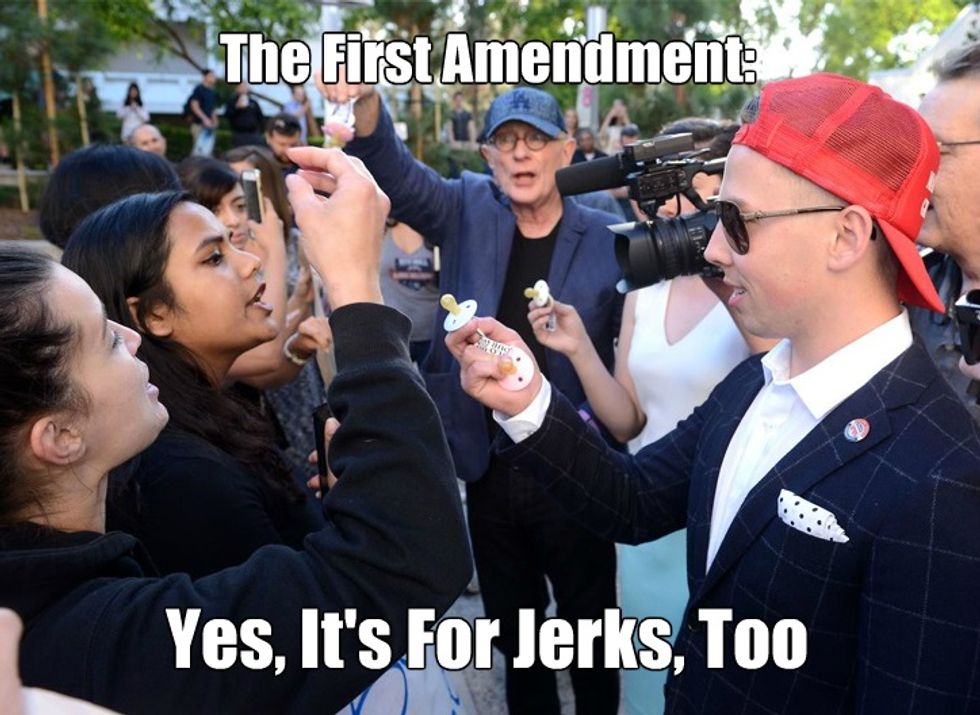 We'll defend to the death your right to be a smug, entitled little jerk baby

Updated: See end of post. You know what really grinds our gears? Institutions that give rightwing morons an excuse to claim that they're being oppressed by political correctness by actually being oppressive. Knock that off, guys! Most of the right's whining about political correctness and oppression and stuff is actually unfounded, of course: as a private company, the Moron Channel had every right to suspend the Duck Dynasty guy for being a bigot, for instance. And no, calling a racist a racist isn't actually infringing on their free speech rights, either. On the other hand, this dumb thing the University of California-Irvine has done really does violate the spirit of the First Amendment and academic freedom and all that stuff we liberals are supposed to be for, and so, as we say, gears are ground, man.

Here's what happened: the College Republicans club has been effectively banned from campus after inviting professional rightwing asshole and Breitbart writer (ah, but we repeat ourselves) Milo Yiannopoulos back to campus in November after a minor violation of rules for guest speakers during his previous appearance at UCI earlier this month. Administrators say it's not a suspension, and that it's about the club's failure to follow rules, not about offensive speech -- and absolutely nobody believes them.

The club failed to provide proof of insurance for private security guards it had hired for the Yiannopoulos event, and were sent an email by the Student Center & Event Services informing them that the failure

“results in immediate suspension of the group,” which would then “not be able to book meetings or events” with the center until next spring.

A UCI spokeswoman, Cathy Lawhon, insisted the club isn't formally suspended, and said the email was "poorly worded." In effect, however, the club is prohibited from meeting on campus, and can't book speaking engagements through the student center, which handles event booking for most campus locations. In what sounds like a fine Catch-22,

The student club could still book some spaces on campus but not through the student center, she said. The university “unequivocally” is not attempting to ban the Republican group from hosting a speaker, Lawhon said.

“We are a place for free expression and free assembly. But you also have to be adult enough to read contracts and follow the rules,” she said.

So yes, go ahead and book speakers. You just can't use the campus service that actually books speaking locations on campus. No, you're not banned. No, the rules violation isn't a transparently flimsy pretext. And then there's the timing of the ban:

Ariana Rowlands, the club’s president, noted that the email arrived four hours after she met with two UCI administrators who asked for a debriefing on the Yiannopoulos event. During the Monday meeting, Rowlands told them she planned to bring back the provocative Yiannopoulos, a gay man who spices his conservative points with un-PC talk and humor.

The timing between Rowlands’ meeting with university administrators and the letter detailing the sanction was a coincidence, Lawhon said.

We wouldn't believe that if a campus liberal group were having its ability to operate shut down, and we don't believe it for the College Republicans.

Yes, Milo Yiannopoulos is a rabble-rousing, pseudo-intellectual troll who thinks using memes from white supremacists is hilarious because it pisses off progressives, and that most rape victims are merely whiny sluts. His June 2 talk was titled "Social Justice is Cancer," haw-haw-haw. And the College Republicans handed out pacifiers to students who came to protest his talk, because they are incredibly sophisticated and witty. We don't have a single good thing to say about any of these morons, who deserve an annoyed eyeroll far more than they deserve sanctions.

But a publicly funded college ought to know that you protest that shit and meet it with more speech, you don't try to shut it down. That's First Amendment 101. Thanks a hell of a lot for giving these idiots a reason -- a good reason -- to complain that they're being treated unfairly, when simply ridiculing them (or quoting their idiocy verbatim, which has the same effect) would be far more effective. Yeesh. UC Irvine, don't make the College Republicans call the ACLU on you.

Update/Clarification: Several commenters pointed out that requiring proof of insurance for campus events is common, and in Today's Litigious Society, a pretty big deal. We did a little more looking into this, and in a June 21 press release, UCI says it had advised the College Republicans before the June 2 Yiannopoulous event they'd need "proof of insurance if a private security firm was to be brought on board for their event." They didn't do so, and hence the restriction on further bookings through the student center. The release also says other campus groups have faced similar restrictions, so no, the College Republicans don't appear to have been singled out. But they very successfully whined as if they had been, and the university sure came off looking bad.

There's also a new development: UCI has reversed the sanctions pending the College Republicans' appeal -- and yes, they were told right at the start they could appeal. The press release added that "Student Affairs leadership will work with club leaders to ensure a clear understanding of the legal requirements for holding events in the Student Center."

And how have the College Republicans reacted to having their booking privileges reinstated? They're demanding

nothing less than a resolution by the University of California Regents to condemn rampant discrimination against conservative students. This discriminatory behavior has been going on for far too long and it needs to be put to an end.

So yeah, they're exactly the bunch of whiny jerk babies they've always been, and Wonkette regrets having fallen for their claims of repression.