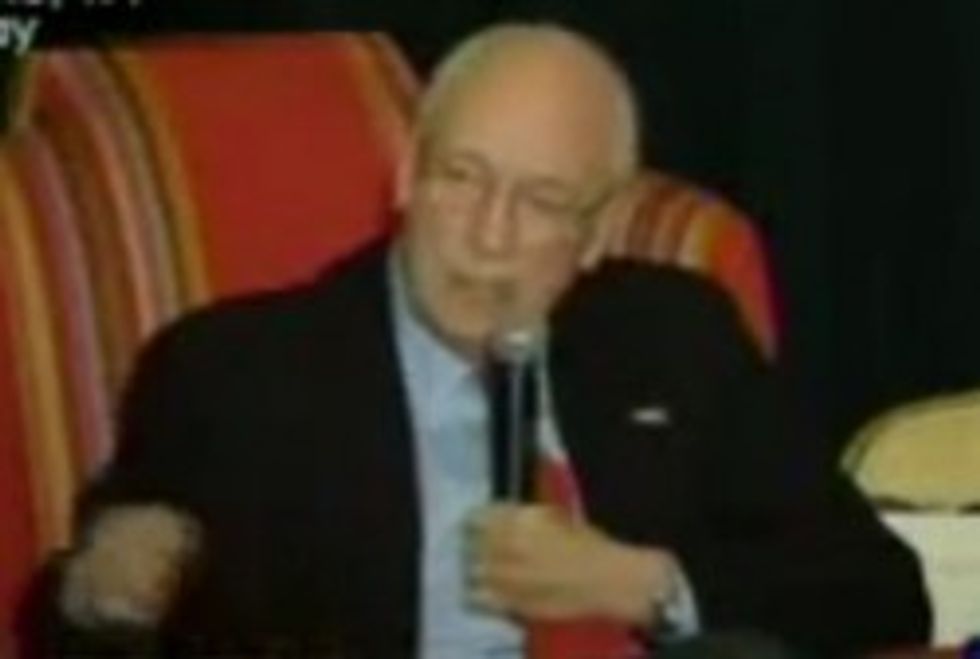 Dick Cheney has a new heart, and is ready to tell the world of the darkness that is inside it. This weekend, the former vice president showed up at the Republican state convention in Wyoming to tell a crowd what they wanted to hear (there seems to be a lot of money in this!) Sitting in an ugly rainbow chair for one and a half hours, Cheney insulted Obama and the status quo (much of quo came from another status, but never mind), "without seeming to tire." Because hatred is a powerful elixir, my prrrrecious.

I can't think of a time when -- ah -- I felt it was more important for us to defeat an incumbent president.

Evidently the trauma of the Other Time was removed along with Heart 1.0, or else they took the whole denying brain with the heart, and donated it to "science."

Fox News was real excited about this news: DICK CHENEY IS TICKED OFF! They tittered, trying very hard to come up with a pun involving the human heart that was not in poor taste. Here is a video:

But "unmitigated disaster" was really as mean as Cheney could muster right now, a mere three weeks into Heart 2.0 (slow clap). Obama is just godawful "with respect to the economy, and tax policy, and defense and some other areas" and to have him reelected would be a ... "huge disappointment." GETTING HIM WHERE IT HURTS.

But if something were to, uh, happen, we wonder, is this really how Mr. C. would like to go out of this world? Saying someone is THE WORST GUY EVER due to the quality of the lemonade that they have been forced to make?

Anyway, the truly best part of all of this --