US Saved From Not-American Teens With Deadly Ball-Sorting Robots -- No, Again 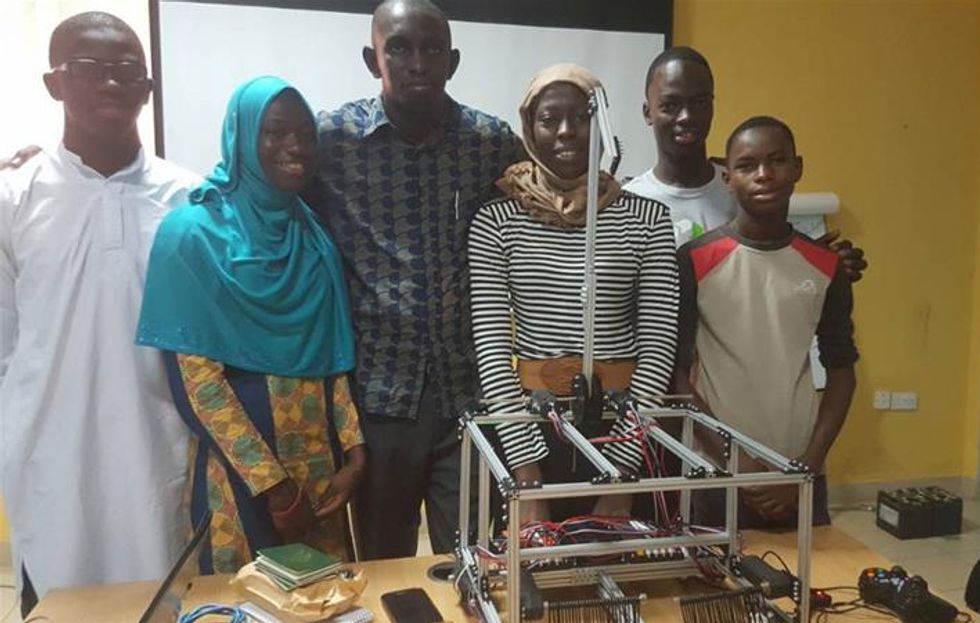 A robot and a $170 application will get you a cup of coffee.

Monday we brought you the sad tale of the robot-building high school girls of Herat, Afghanistan, who were one of two teams of robot-builders denied visas to come to the USA for the annual FIRST Global Challenge robot competition. The other team was from Gambia, and darned if their story isn't a lot like what happened to the girls from Herat: Their robot can go to Washington later this month to engage in a furious tournament of sorting a bunch of balls, but the robot's teen makers / programmers will have to stay in Gambia and watch the competition on Skype. Don't you feel a lot safer, thanks to this extreme vetting?

Al Jazeera was told by Gambia's Minister of Higher Education, Research, Science, and Technology, Moktar Darboe, that the kids were "very disappointed."

"They put in so much effort into building this, and now, after all the sacrifice and energy they put in, they have been left disheartened," Darboe, who is also the team's mentor, said on Monday.

The robot, a ball sorting machine, will be shipped off in the next day or two, he added.

Gambia and Afghanistan aren't on the list of countries subject to the Trump administration's semi-reinstated travel ban, and teams from other Muslim majority countries that are on the list, like Sudan and Iran, were able to travel, so it's not clear what role the current wave of immigration paranoia may have played, if any.

Here's the part that's kind of hard to believe: The application fee for a visa was $170 per team member, in a country where 50% of the population is below the poverty line and the average 2007 wage was $1 to $2 a day. Even assuming these kids' families are more well-off (high schools charge fees to attend), that's a hell of a lot of money for an application.

As with the Afghan girls, the Gambian kids weren't told why their applications were denied, because the State Department doesn't comment on "consular affairs." They did, however, get a nice visit to their school from US Ambassador C. Patricia Alsup, who saw the robot project and seemed supportive:

"She gave us hope not to give up, and she said they would give us all their support to help us go further," 17-year-old Khadijatou Gassam, a science student and spokesperson for the team, said.

Also like the girls in Herat, the Gambian team had some trouble with their own country's customs officials, who held the package of robot parts sent to the team from the USA and asked the kids if they were "building RoboCop." The team's programmer, Fatoumata Ceesay, said the team went ahead and built its robot, even though they didn't expect to be able to operate it themselves at the competition: "[We] started building it after the [visa] rejection. We built it despite knowing we weren't going," she said.

Like the Chicago Cubs before 2016, the year history completely broke down, the team is looking forward to next year, says Gassam, the team spokesperson:

"But we're not giving up, despite the challenges we face, we still continue to work hard," she said. "Next year it will be somewhere else, so I think next year we have hope to get there."

Here's hoping no future competitions end up being held in Irving, Texas, where in 2015 the high school went nuts over a Muslim kid's rebuilt digital clock, which was obviously a bomb. The whole state might melt down at a bunch of foreign kids with robots.

Yr Wonkette is supported by reader contributions, and we are not robots (we are human and we need to be loved). Please click the "Donate" clicky below!