USA Gymnastics Judge Preemptively Banned From Wonkette Comments, For Being TOO AWESOME

Larry Nassar [Letter]: "Those patients that are now speaking out are the same ones that praised and came back over and over...The media convinced them that everything I did was wrong and bad. They feel I broke their trust. Hell hath no fury like a woman scorned."

Following a week of victim-impact statements from 156 of his accusers, former Olympic gymnastics doctor Larry Nassar was sentenced today to 40 to 175 years in prison for sexually assaulting young women, some of them girls as young as six or seven, while pretending the abuse was medical treatment. Judge Rosemarie Aquilina didn't attempt to disguise her disgust for Nassar, telling him, "You’ve done nothing to deserve to walk outside a prison again."

She said it was her "honor and privilege to sentence you," and after detailing the length of each sentence, added, "I just signed your death warrant." (No, that was not a signal to you Terrible Ones that Wonkette's Rules for Commenting Radicals are suspended.)

"I just signed your death warrant."

The sentencing in the molestation case is in addition to a 60-year federal sentence for possession of child pornography.

Before the sentencing, Nassar was allowed to speak to the victims in attendance:

"What I am feeling pales in comparison to [your] pain, trauma and emotional destruction," he said. "There are no words to describe the depth and breadth of how sorry I am for what has occurred. An acceptable apology to all of you is impossible to write or convey.

"I will carry your words with me for the rest of my days."

That statement didn't blunt Aquilina's contempt for him, or for the argument he'd made in a letter to the court complaining he wasn't being treated fairly:

The judge took out a six-page letter he sent the court last week in which he insisted what he had done to the victims "was medical not sexual," that he was a "good doctor" and the victim of a media frenzy, and that prosecutors had pressured him to to admit to things he had not done.

He complained that his patients had turned on him. "'Hell hath no fury like a woman scorned,'" the judge read aloud, her voice full of scorn.

She asked him, "Would you like to withdraw your plea?"

"Because you're guilty aren't you?" she pressed.

Aquilina said she simply didn't believe that Nassar was owning up to what he pleaded to: penetrating minors with ungloved hands for his own sexual pleasure.

(If you had wondered: Here is an explanation of when "internal pelvic floor treatment" is an actual medical treatment and when it is sexual assault and rape.)

Judge Aquilina tossed the letter away from her, and it's clear that, given the chance, she'd do the same with Nassar himself, but we've got laws against cruel and unusual punishment.

Your words will haunt him. He may not ever admit that, because I doubt he'll have many visitors except the nightmares that you all bring him.

The Twitterverse was full of reactions, mostly women saying You Go, Judge Aquilina, and some men harrumphing "this does not bode well for judicial temperament." A sampling: 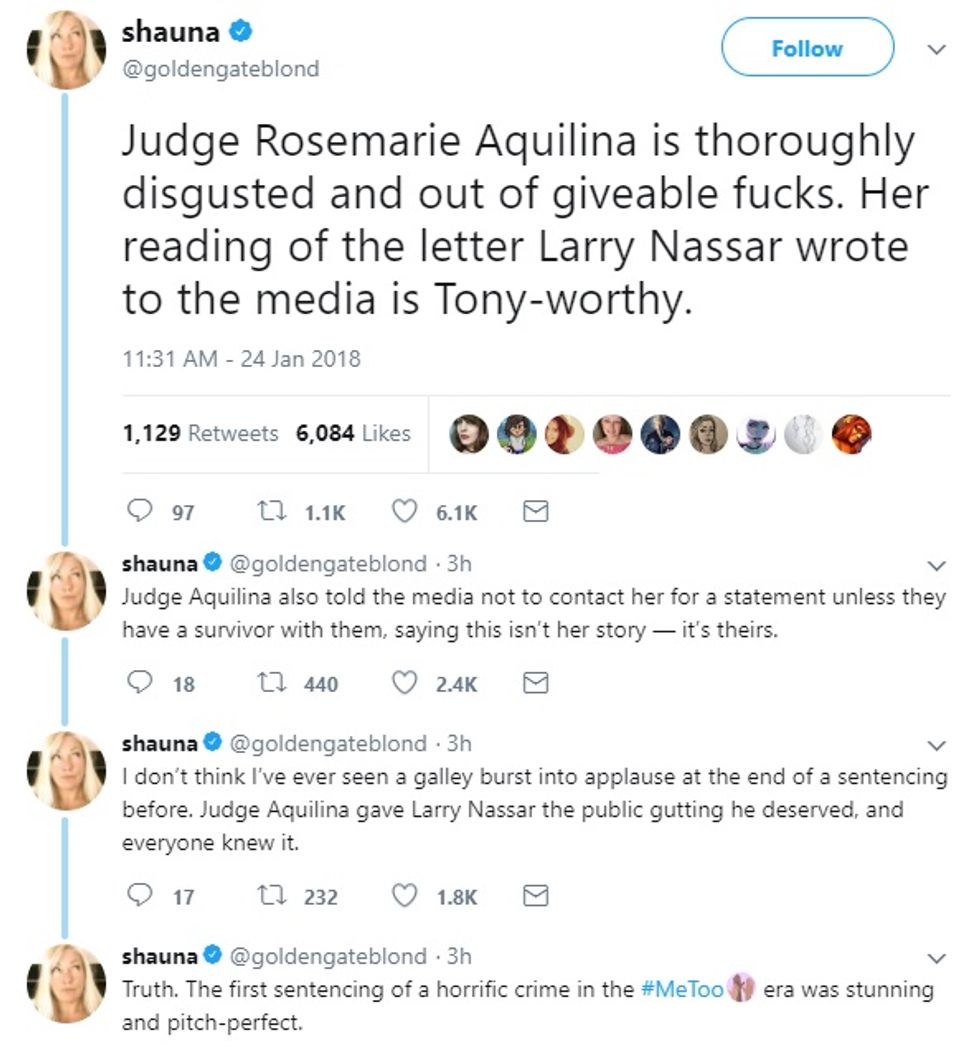 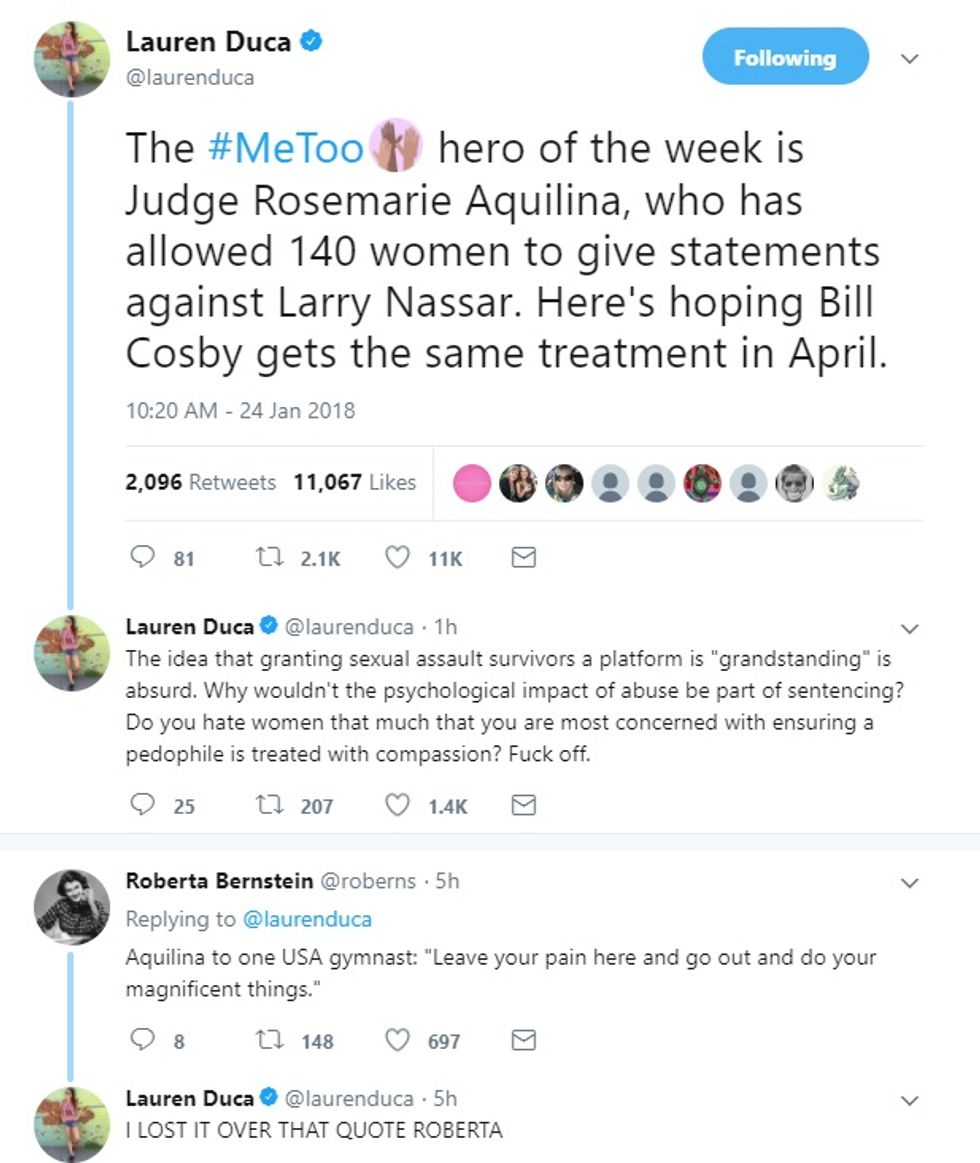 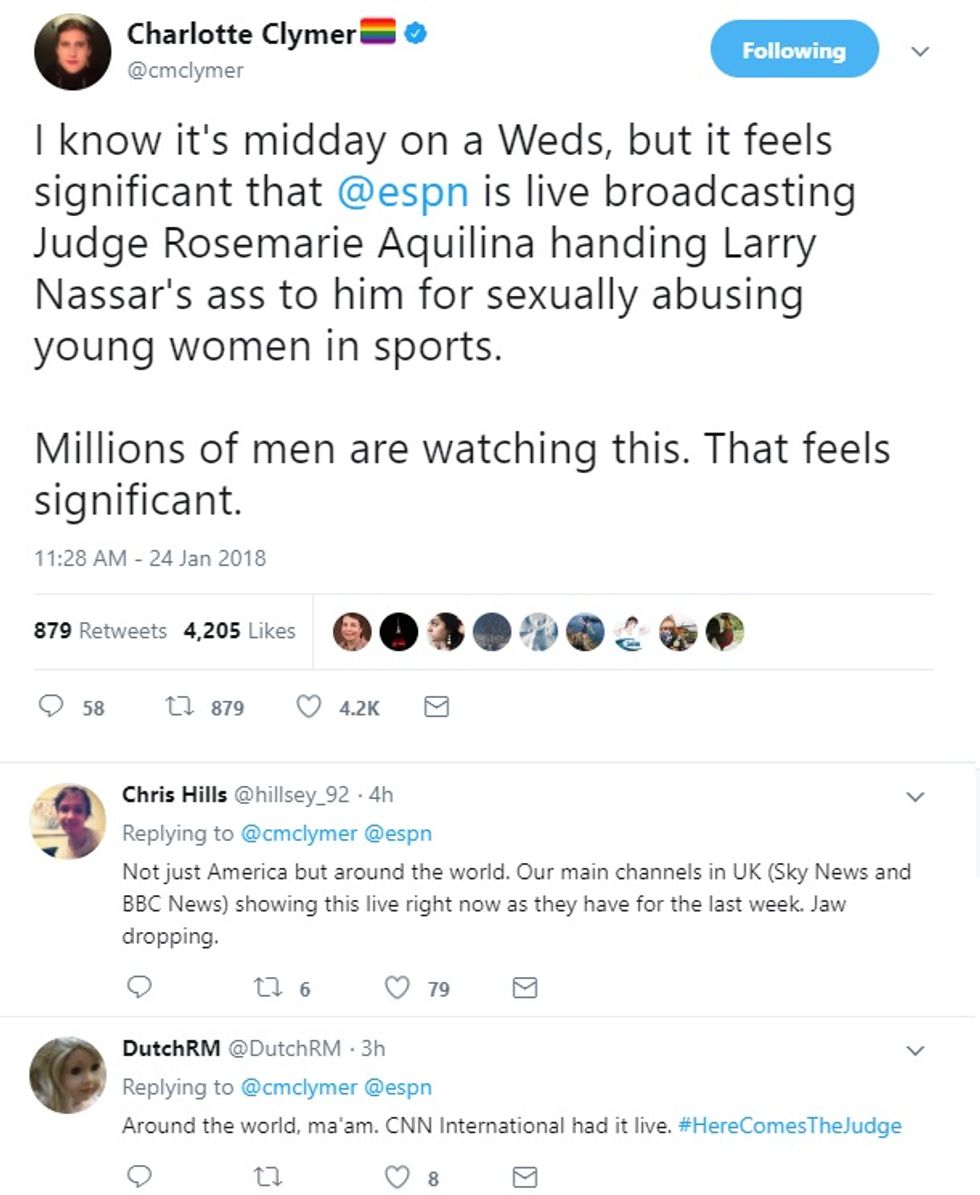 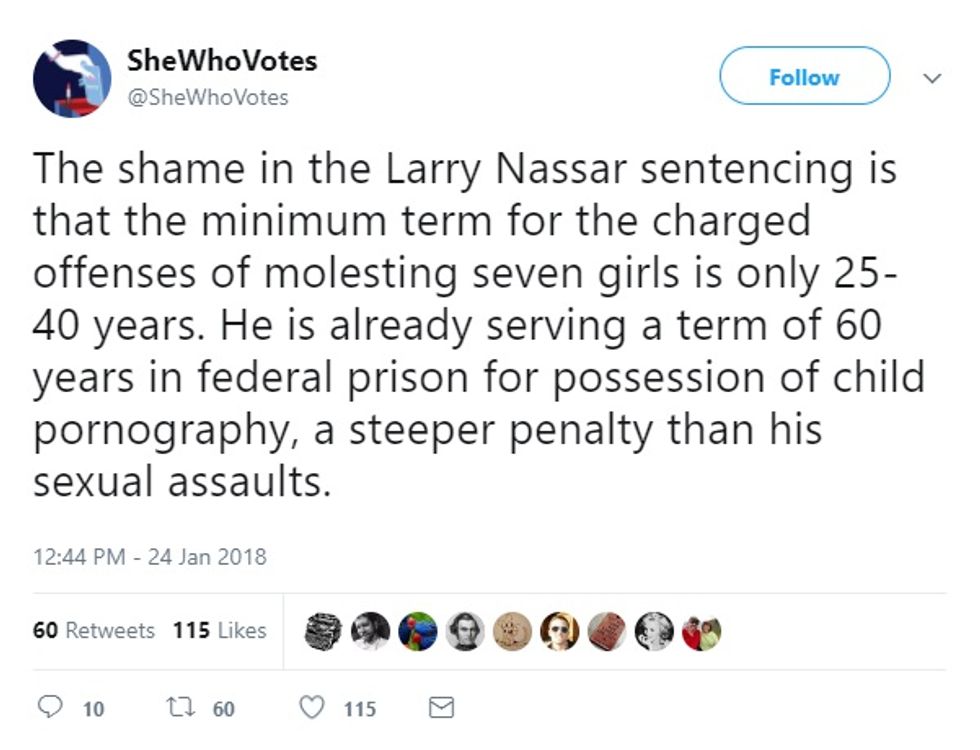 We would add some copies of tweets saying Judge Aquilina was grandstanding and unfair and not being impartial, with replies pointing out that her statements came only after Nassar had very clearly admitted his guilt, followed by more whineage about how unprofessional and unseemly she was, but fuck those guys, for real. Justice is this guy never being outside a prison ever again.

It is now your open thread. Let's just remind you, once more, that the commenting rules remain in effect. They in no way require you to say anything kind about Larry Nassar -- of course he's scum. We'd simply prefer that you not turn the comments section into a competition to see who can think of the most gruesome tortures. And no, gruesome wishes for his being raped in prison "with votes" won't fly either. Responding to an inhuman crime by discarding our own humanity just strikes us as a bad idea all around.

Trump Gets Spanked By North Korean Dictator, Apparently Likes It