What you see above is not, despite all appearances, your freshman roomie's botched and infected yin-yang tattoo, but a symbol of unity and celebration! It celebrates the matched sets of opposite-sexers who keep our planet from flying apart, according to the organizers of "Humanum: An International Interreligious Colloquium on the Complementarity of Man and Woman," held this week at the Vatican.

As the tortured subhed suggests, "Humanum" brought out a who's-who of who's homophobic in the name of religion, so naturally there was a sizable delegation from our hallowed shores. Don't worry if you couldn't make it, Wonketteers -- your anti-gay interests, if any, were represented by such luminaries as Saddleback megachurch megapastor Rick Warren and National Organization for Marriage gay-hate drum major Brian Brown. (We were more than a little surprised to see Brian there, since the massive debt that's swallowing NOM whole would seem to put international travel a bit out of reach.)

Frankly, we were shocked anyone from our Heathen States of America could get into this thing, since the crusade to protect straight marriage here has been a dismal failure of late. Almost two-thirds of Americans are either gay-married or about to be, and it all happened on their watch: while Brian was hamming it up with Mike Huckabee on the Capitol Lawn and Rick Warren was striding around the pulpit like Garth Brooks, the gay storm front has been rolling unchecked across our great land. Maybe if they hadn't indulged in the sin of vanity in so many of their waking hours, they'd have been able to put the brakes on our collective moral decline!

Team Straight America did sneak in somehow to join homophobes of many nationalities and faiths for this celebration of exclusion. It was like a Benetton ad of bigotry! How inspiring that such a diverse crowd could unite to blame the erosion of marriage, which is "God's idea," and the resulting collapse of society on The Gays and, to a lesser extent, The Divorced. (Mostly The Gays, though. At least straight divorcees were, at one point, keeping us all safe with their holy unions.)

In addition to three days of speeches by Pastor Saddleback and others, attendees were treated to a series of videos produced by discredited pseudo-sociologist Mark Regnerus about how unnatural it is to force marriage equality on people.

These videos ask some salient questions. For example, why would anyone need permission to same-sex marry when there is no such thing as homosexuality?

The third of these clips features Thérèse Hargot-Jacob, a French philosopher, sexotherapist, and blogger, explaining that a person's sexuality is determined entirely by whether they have a man’s body or a woman’s body. "How can you know what being a homosexual or heterosexual means?" she asks, concluding the terms are "meaningless" and merely "created for political battles."

Her interview is followed by Phillipe Ariño, who explains that, as a person with homosexual desire, he has embraced non-sexual friendships to somehow learn how to love himself as a man. The National Organization for Marriage has previously highlighted Ariño as a "gay voice against gay marriage."

We know what to expect when Rick and Brian get together with their friends, but there was one person we were disappointed to see getting in on the totally non-gay action: Pope Francis, a.k.a. Papa Frank, a.k.a. Cool Pope. Sure, this party just happened to be held at his place and sponsored by all kinds of Pontifical organizations, but we assumed he'd take one look at this bunch and use his scheduled address to set them all straight, as it were, about loving thy neighbor. 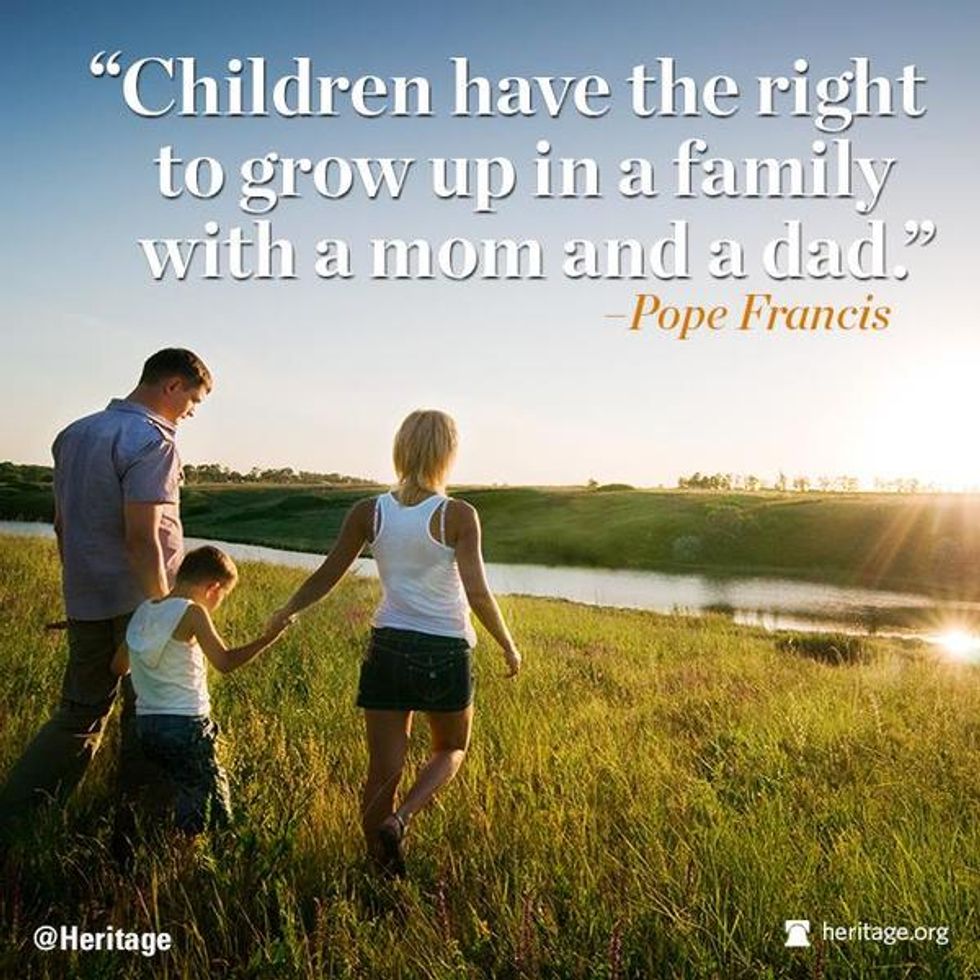 While we were shocked to learn that the Heritage Foundation didn't quote the Pope exactly on their pithy little graphic, they did come depressingly close.

The family is the foundation of co-existence and a remedy against social fragmentation. Children have a right to grow up in a family with a father and a mother capable of creating a suitable environment for the child’s development and emotional maturity. That is why I stressed in the Apostolic Exhortation Evangelii Gaudium that the contribution of marriage to society is "indispensable"; that it "transcends the feelings and momentary needs of the couple." And that is why I am grateful to you for your Colloquium’s emphasis on the benefits that marriage can provide to children, the spouses themselves, and to society.

In these days, as you embark on a reflection on the beauty of complementarity between man and woman in marriage, I urge you to lift up yet another truth about marriage: that permanent commitment to solidarity, fidelity and fruitful love responds to the deepest longings of the human heart. I urge you to bear in mind especially the young people, who represent our future. Commit yourselves, so that our youth do not give themselves over to the poisonous environment of the temporary, but rather be revolutionaries with the courage to seek true and lasting love, going against the common pattern.

Yes, getting straight-married in today's crazy morally corrupt world is a true act of revolution! We must teach our young people to throw off the shackles of the world's expectations by getting married as quickly as possible! Break the mold!

I pray that your colloquium will be an inspiration to all who seek to support and strengthen the union of man and woman in marriage as a unique, natural, fundamental and beautiful good for persons, communities, and whole societies.

Yr Wonkette is barred by our in-house constitution from adopting any kind of official religion, and if we were to defy that cherished document, drafted solemnly on the back of the beer list in the lobby bar, we would probably not go Catholic. Still, this Pope was winning over our besmirched souls with his co-ed foot-washing and homophobic cardinal firing and Patti Smith fandom. We're hoping he got involved with this thing by mistake, tricked by the ridiculous title into thinking it was a genuine call for interfaith unity rather than a collective search for new ways to say that God thinks straight people are just the best.