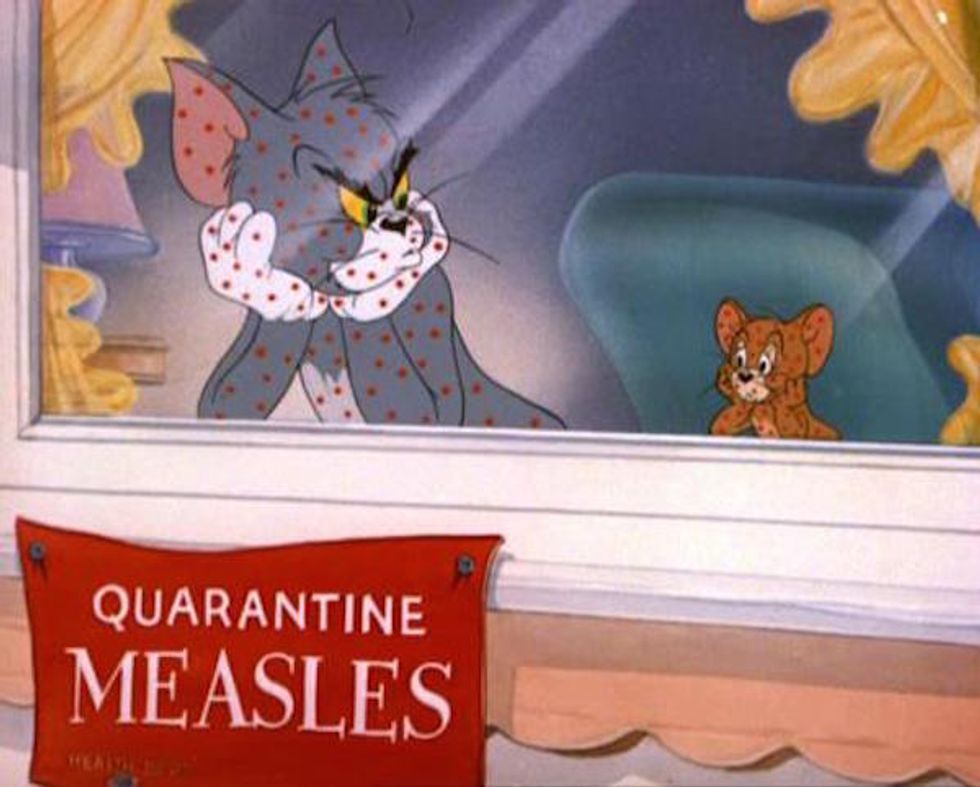 Since they have to stay inside during the winter anyway ...

The traditionally godless heathen state of Vermont, home of your favorite socialist and your favorite ice cream, has decided to pick up California's handcrafted hippy-dippy anti-vax woo woo slack. Earlier this year, California Gov. Jerry "Is 'Moonbeam' Still Funny?" Brown signed into law a requirement that parents VACCINATE THEIR FUCKING KIDS because we were all tired of explaining how the fuck Mickey Mouse got the measles. (Parents who think their kids are going to wake up with an overnight case of retardation are free to keep their disease-infested spawn at home, to be home-learned and maybe grow up to be a sister-diddling BDSM adulterer like Josh Duggar*.)

So while California is slowly ridding itself of archaic illnesses, Vermonters are preparing for the impending doom of semi-but-not-really-mandatory vaccination by trying to figure out to avoid the loose new requirement to ensure their children benefit from a free public education, while also exposing all the other children to diseases we eradicated a century ago.

Starting in July 2016, parents will have to check a box that says "because RELIGION" if they want to enroll their unvaccinated children in school, which is different from the existing box they can check that says "because REASONS." (This is apparently referred to as a "philosophical" exemption, like these Birkenstocked yahoos are reading Socrates, when we all know they're getting their hot medical tips from the former Mr. Jenny McCarthy.) According to this one dingbat Jennifer Stella, president of the Vermont Coalition for Vaccine Choice, parents in the Green Mountain State are really backed into a corner with this new modified form. How sad. Let us drink her tears:

The vast majority who used the philosophical exemption are planning to or are being forced to use the religious exemption.

Oh, the humanity! If you want to exercise your "right" to let your grubby kid infect the rest of the class, you have to pretend it's for religious purposes instead of philosophical purposes. Stella's group describes itself as a "non-profit grassroots organization representing thousands of Vermont community members, parents, nurses, doctors, scientists, clinicians, state employees, teachers and business owners" that promotes the "principle of informed consent in the administration of all medical procedures, including vaccines" and the belief "that all Vermonters should have the right to grant or withhold consent on behalf of our selves and our children without coercion or penalty." See? It's not about being a selfish anti-science nutjob, it's just about the right to be a selfish anti-science nutjob, at the expense of the community's health.

So now that Vermonters will be forced to say "sky god" instead of "Plato" in order to bring back polio, some of them are getting creative.

But Shawn Venner and Aedan Scribner, who are raising their 8-month-old daughter, Zelda, in Cabot, said the issue may spark a revival.

‘‘I grew up here in Cabot, and would love my daughter to be able to go to the same school I did,’’ said Scribner. ‘‘But to get her into that school I’m going to have to do something like convert religiously.’’

The couple said they are not opposed to all vaccines for their daughter, but strongly support choice in the matter.

There has been talk among friends of starting a new religion, Venner said, ‘‘a religion that says we’ll pretty much have a choice.’’

Poor, poor Venner-Scribner family and their friends, huh? In order to avoid exposing their daughter to the oogly-boogly scary vaccines, they might have to up and start their own "Ew, We Hate Vaccines" religion, like they're L. Ron Hubbard, so they can, in good conscience check the "because RELIGION" box. It's either that or -- shudder, gasp! -- VACCINATE THEIR FUCKING KID. Oh, what's a freedom-loving dumbass parent to do? (They are to VACCINATE THEIR FUCKING KID, that's what.)

Anyway, enjoy the ridicule, Vermont, and whatever epidemics unnecessarily befall your fair state if enough of you decide to go all California and turn this into An Issue. We west coasters all had a jolly good time hiding ourselves away in sterile bubbles until the outbreak of stupid -- and measles -- passed.  But maybe you'll be able to simply pray the preventable death away. Best of luck with that.

*Not all homeschooled kids turn out like Josh Duggar.**

**But probably most of them.