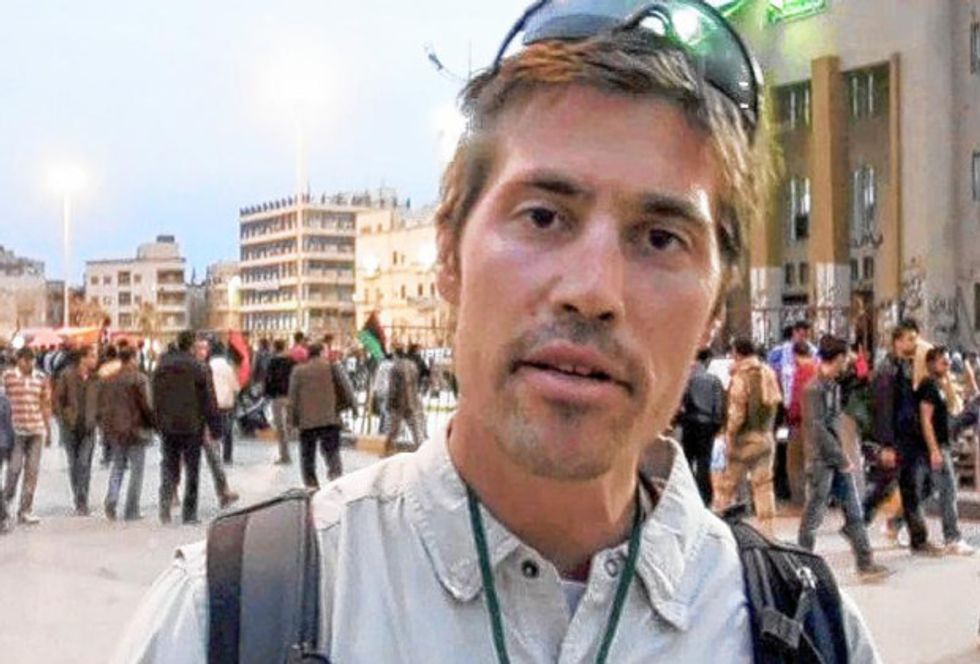 American photojournalistJames Foley was beheaded Tuesday by the group calling itself The Islamic State (or "ISIS, ISIL — whatever you want to call these guys,” in Lindsey Graham's memorable phrase). The FBI has announced that it believes that a graphic video of the execution is authentic. In addition to the beheading, the video shows another American journalist, Steven Joel Sotloff, whom the video's narrator threatened to kill as well if President Obama does not cease airstrikes against the group.

Needless to say, the Usual Suspects briefly paused from barking about how Michael Brown deserved to die, so that they could blame Foley's death on Barack Obama or at least let us know that the president is a weakling for not immediately diverting Air Force One to Iraq to perform a rescue of the remaining hostage. The nine full-time staffers of Twitchy were very upset by Obama's "silence," suggesting that Obama would "muster outrage after vacation," and later screaming that the administration's initial response was "enraging" since the statement merely called it a "brutal murder" and said that if the video were genuine, the president was "appalled." Twitchy far preferred British PM David Cameron's statement, which said that the murder was "shocking and depraved." Those are much tougher words, while merely being "appalled" is weak and womanly, we guess. Also, Cameron cut his vacation short and returned to London, while Obama is still in Martha's Vineyard, and probably golfing with a ball on which he's drawn a picture of James Foley's face. David Cameron for president!

the Islamic State is Obama’s baby. It exists because he abandoned Iraq. James Foley is dead today because of Obama’s disastrous pro-jihad foreign policy.

We had no idea that "appalled" is no longer a term of condemnation; we really need to keep up with this stuff.

Also, there's plenty of speculation out there, since the masked narrator in the video has a British accent, that he was released from Guantanamo. This is already transitioning from "just asking questions" to a dead certainty in the wingnuttosphere.

Noah Rothman at HotAir.com ran a story with the breathless headline "White House knew ISIS planned to kill James Foley," citing an ABC story stating that American intelligence knew of the threats, but conceding, well below the screaming headline, "It is entirely reasonable, however, to believe that American officials had no knowledge of either Foley or Setoff’s whereabouts." So that sixth-paragraph admission will definitely be taken into account by everyone saying that Obama just sat by and did nothing. Rothman's pretty sure Obama was asleep at the switch again, closing his piece by saying "the revelation that the White House was aware of the threats to Foley’s life and was unable to provide for his safety will prompt administration critics to sharpen their attack." Golly, we bet it will!

Even the process of verifying the video came in for attack. Megyn Kelly tweeted that regular Fox guest Gen. Michael Hayden said, "They’re trying to look for evidence to make it not true," which we suppose is one way to describe any process of verification, but we know what Obama's real motive is -- to make ISIS, which he's dropping bombs on, look like they're not so bad.

President Obama addressed the killing today, saying that the U.S. will continue to confront ISIS and noting that he had called Foley's family to express his condolences (but did he go and visit them in person? He did not!) He also condemned ISIS for abducting women and children, for torture and murder, for killing both Shia and Sunni Muslims, and for targeting religious minorities for genocide. However, he also said:

ISIL speaks for no religion. Their victims are overwhelmingly Muslim, and no faith teaches people to massacre innocents. No just God would stand for what they did yesterday and what they do every single day.

We're pretty sure that within an hour of the address, we'll see some careful parsing of that statement so that it REALLY means that Obama was defending Islam, his actual faith, by claiming that ISIS is a perversion of it.

UPDATE: Many thanks to alert Wonket Operative "Peckerweed," who notes that Pam Geller herself wins the "Dok Called It" prize with a piece titled "Obama Uses Jihad Beheading of American Journalist to Proselytize for Islam." We really can't claim any psychic powers, though -- Geller is simply that predictable. And every single Muslim in the world believes exactly what ISIS believes, of course.