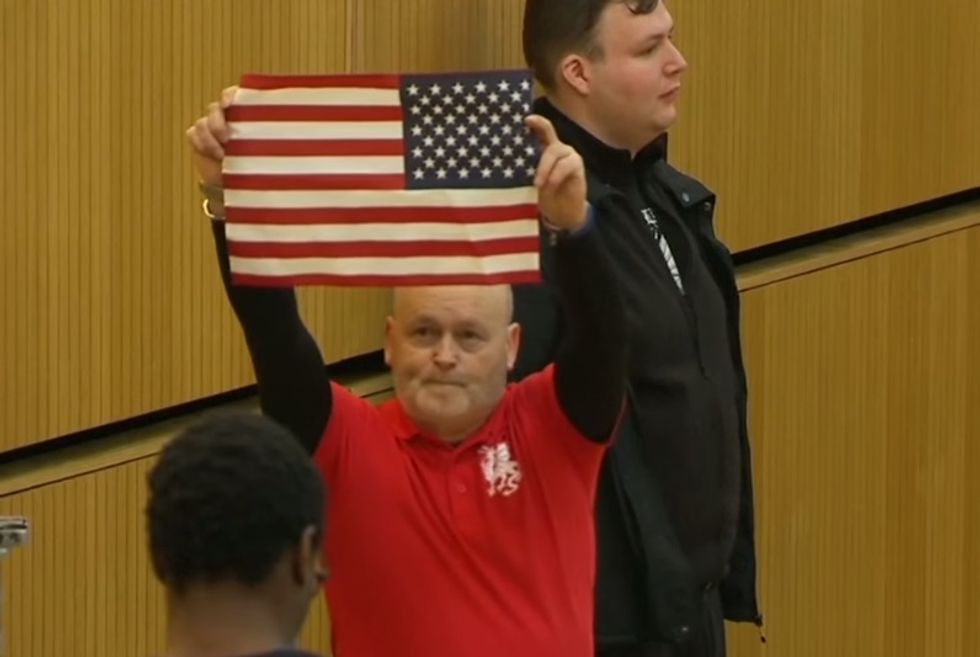 The Official Monster Raving Loony Party wishes it to be known these gents are far too nutso for the OMRLP.

Six or seven anti-Muslim, pro-Brexit idiots calling themselves the "White Pendragons" tried to pull off a citizens' arrest of London Mayor Siddiq Khan Saturday, but didn't have much luck, even though they proclaimed themselves empowered under "common law" to do so. They even had a home-made gallows (for show only), an American flag that they held up backwards, and a fanatical devotion to Donald Trump. But the audience that had come to hear Khan address the lefty Fabian Society only laughed at the Pendragons' list of demands, and once the police arrived, the brave protectors of English whiteness were arrested, to applause.

Here's a highlight video from the Guardian:

Also, real emetic fans can watch a full cellphone video by the Pendragons' leader, Davey Russell, a member of the rightwing white supremacist English Defense League. It's just short of 30 minutes long, and like a fine Australian table wine, guaranteed to open up the sluices at both ends.

Stupid England! You can't break up with Donald Trump, 'cause HE'S DUMPING YOU FIRST!

Russell and his fellow dipwads showed up ready to "arrest" Khan for a variety of crimes they'd made up, accusing him of collaborating with terrorists and insisting Khan somehow crimed by calling for Donald Trump to cancel his trip to the UK -- even though everyone knows that was Barack Obama's fault. Russell also said that Khan had no business talking about global politics like a globalist, because that's above his pay grade: "He should keep his nose out of state affairs and look out for what’s going on in London," said the alleged hominid outside the meeting hall, where he parked his pretend gallows:

Once Khan began to speech, one of the Silly Party's members got up to deliver a very serious statement, as the Washington Post reports:

“Ladies and gentlemen, we are here today to make a peaceful, nonviolent citizen’s arrest of those named,” the man said. He named Khan and Parliament member Kate Green, who was chairing the event, and two other speakers.

Green asked a security guard to please show the group the door, but Green has apparently been on the internet, and explained that he couldn't be removed, because Fake Law Reasons:

“We are under common law jurisdiction!” Russell cried. “If you touch us, you will be done for common assault. We’re not leaving.”

He said he had called the police before crashing the speech, and promised they would soon arrive to arrest the mayor. It would just be a few minutes.

The audience somehow managed not to panic. In fact, they began to slow clap while waiting for the doofuses to be removed. The Pendragons gathered in a corner and Russell explained to curious audience members that Khan would soon be arrested for "subverting British law," although he couldn't get much more specific than that. A reporter asked him what authority he had to arrest Khan, and he said, "The Magna Carta," just like an American SovCit would say "the Constitution" and then sign his name in lowercase letters with a thumbprint.

The police still hadn't arrived after 10 minutes or so, so one of the protesters took his backwards American flag to hold up and show to Khan:

The audience booed especially loudly at this. “Good one!” Russell cheered.

Talk about owning the libs! You bet they were triggered!

Once the cops showed up, Russell, who was livestreaming the whole mess, was looking forward to their assistance in taking Khan to prison. That's a big difference from American SovCit practice, where they expect the county sheriff to help them set up a trial for treason and then maybe hope a summary execution is in the offing. But sadly, when a constable came into the hall, he instead told Russell, who was sure he had the Magnum Condom on his side, "You’ll have to leave now."

The constable didn't seem to take Russell's list of complaints very seriously, either, even though it listed, among other things, violations of "the Coronation Oath Act of 1688." The copper did at least say the police would "investigate" Russell's grievances. When Russell demanded the police seize Khan and take him in, the officer said, “We don’t do citizen’s arrests...We do lawful arrests." Which of course means the corrupted law of the New World Order.

Russell and the White Pendragons were eventually persuaded to leave, although he kept demanding a refund for his ticket. Back at the podium, the wanted criminal mayor dismissed the brave patriots as if they were mere common ruffians:

“It’s a pleasure to be here,” he said, “even though we were distracted by the actions of what some would call very stable geniuses.”

Later, on his Faceplace page, Russell declared victory, insisted he was still absolutely in the right since he'd been the one to call police, and celebrated with really bad photoshops:

Also, unlike the sneering, disrespectful mockery in the Washington Post, Dead Breitbart's Home For Scared White People gave the White Peendraggers a very flattering writeup, full of scary crime statistics and the sense that London is on the verge of being overrun by ISIS:

Good to see that some people still love Donald Trump, even if they can't vote for him. Obviously, we need to change our immigration laws.

Yr Wonkette is supported by reader donations. Please click here to throw money at us! No bangers and mash, bubble and squeak, or spotted dick, please.