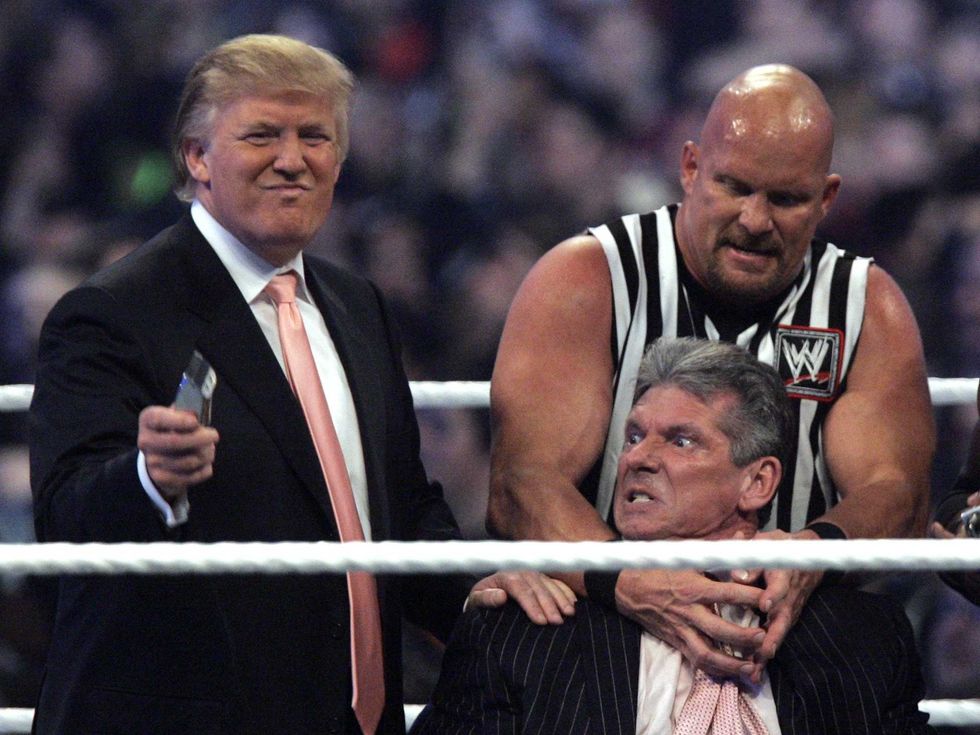 It's always nice when the White House spouses have a hobby to keep them busy! Wrestlemania maniac Vince McMahon, husband of Small Business Association administrator Linda McMahon, is setting up a new football league for all the God-fearin', hetero patriots who just want to watch grown men body slam each other without all that icky politics. Here, take a look at this awesome trailer!

This is the future. This is not the past. This is the XFL. #XFL2020 pic.twitter.com/KvwdnGqMZH

PADDED ROULETTE. Wow. With that kind of marketing, this project is guaranteed to be a huge success!

"But wait," you are saying! "Wasn't there some other XFL like 15 years ago? Wasn't it, like, worse than Crystal Pepsi?" You're showing your age, Wonkers! Yes, in 2001, the WWE impresario created a challenger to the "No Fun League," featuring harder hits, fewer penalties, and cheerleaders gyrating like pole dancers. It went over like a fart in church.

The ALL NEW XFL will speed up play by ... allowing for harder hits and fewer penalties. No but this time will be different because they'll do it the good, clean Christian way! They'll have 8 teams of 40 guys, and every one of them will stand for the national anthem as White Jesus commanded. Plus they'll bar any player who has ever been arrested, even those never convicted of a crime. And they'll do it all for $100 million dollars! Which is less than the 2018 salary cap of the Cleveland Browns, so you know the quality of play in the XFL is going to be amazing.

Well, kudos to Vince McMahon for putting his money where Donald Trump's mouth is. And nice of him to forgive Trump after that awkward head-shaving incident.

Before Trump advocated an NFL boycott FOR THE TROOPS, he complained that football is just pathetic now that those "son of a bitches" aren't allowed to get concussions any more.

Today, if you hit too hard: 15 yards! Throw him out of the game! ... They're ruining the game! That's what they want to do. They want to hit!

Easy there, Marge Schott! Maybe "they" don't actually want to turn their brains to scrambled eggs for your amusement. And maybe the sport is dying because it's fucking dangerous and parents don't want to let their kids play high school football any more.

(Full disclosure, your FDF has a son who plays high school football. And you don't need to tell her that it's fucking dangerous, TYVM, since her mom is ON IT.)

But if Vince McMahon is sick of plowing his cash into the Roid Rage Minstrel Show, we're delighted to see him waste some of it on another failed football league. Per Forbes,

I wanted to do this since the day we stopped the other one. A chance to do it with no partners, strictly funded by me, which would allow me to look in the mirror and say, "You were the one who screwed this up," or, "You made this thing a success.”

Knock yourself out, buddy! If Republicans really believe that NFL ratings are down because a handful of players took a knee to protest rampant police brutality, they are certainly welcome to test that theory in the free market. Sure, ratings are down for most sports, the decline preceded the Take A Knee movement, and there are many BLM supporters who refuse to watch football while Colin Kaepernick remains blackballed. But okay, what the market really wants is a bunch of crappy football players knocking the shit out of each other between fumbles every weekend. SPOT ON. You can stream it live to Air Force One, and save Don Jr. the trouble of fast forwarding through the boring parts where no one is bleeding.

As for McMahon, he's the ideal guy to lead a family values sports league. Well, if you put aside the sexual assault allegations and running a business that relies on illegal steroids.

Anyway, forget all that. You know the Religious Right will! McMahon is a good Christian and a good businessman. Praise Trump! Amen.

Please give us money! We use no performance enhancing drugs! Or ads!