Virginia Is For Lovers (Ramming Gay Down Your Throat) 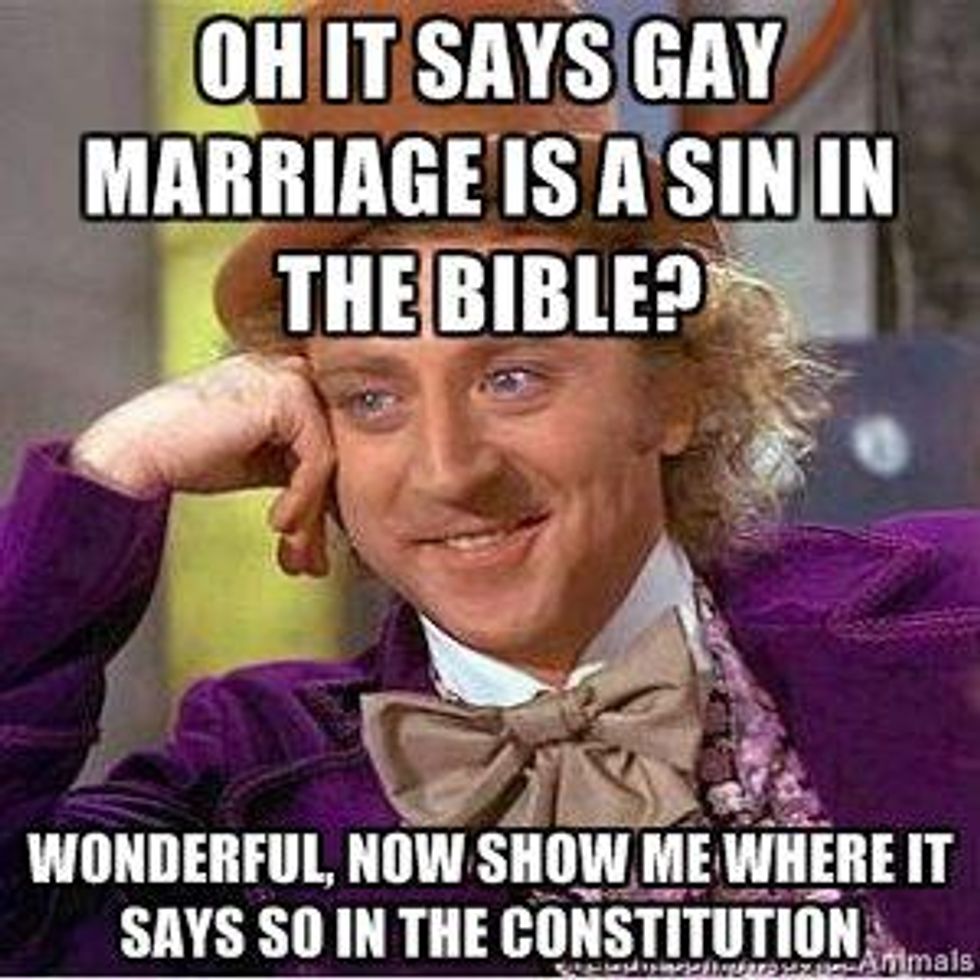 Dag, federal judiciary, another state'sban on gay marriage is unconstitutional? Which one is it this time? Virginia? Cool beans. And Virginia has a brand-new attorney general, Democrat Mark Herring, who's actually on the side of the two gay couples who brought the suit, so the state will not appeal the decision; instead, the appeal will be handled by attorneys for two circuit court clerks in the state. Since those offices actually issue marriage licenses, the state's refusal to defend the ban is unlikely to be thrown out on the basis of standing like California's Prop 8 was, although the defense lawyers are from similar anti-equality angerbear groups.

Sheesh, at this rate, every state is going to end up gay marrying their chairs to a can of beans and we will have nothing left to write about. Except maybe all the gay divorce rumors, so there's that. Happy Valentine's Gay, Virginia!

So, the cool details: The decision, by U.S. District Judge Arenda L. Wright Allen, threw out the state's constitutional ban on same-sex marriage, because there was no legitimate government interest. (Wahhh, but what about the children???):

“Gay and lesbian individuals share the same capacity as heterosexual individuals to form, preserve and celebrate loving, intimate and lasting relationships,” Wright Allen wrote. “Such relationships are created through the exercise of sacred, personal choices — choices, like the choices made by every other citizen, that must be free from unwarranted government interference.”

And given Virginia's place in history, let's have a nice round of applause for this rhetorical coolosity: The decision kicks off with a quote from Mildred Loving, of Loving v. Virginia, the case that finally brought an end to bans on interracial marriage (we've trimmed it a little for space):

To that, Judge Wright Allen added,

“Tradition is revered in the Commonwealth, and often rightly so. However, tradition alone cannot justify denying same-sex couples the right to marry any more than it could justify Virginia’s ban on interracial marriage.”

The decision rejected the defense claims that the state had a legitimate interest in preventing same-sex unions, no matter how much some people think the state needs to protect "tradition" and ensure that people will make babies:

“The goal and the result of this legislation is to deprive Virginia’s gay and lesbian citizens of the opportunity and right to choose to celebrate, in marriage, a loving, rewarding, monogamous relationship with a partner to whom they are committed for life. These results occur without furthering any legitimate state purpose.”

Because the defenders of the law actually did their legal paperwork right, Wright Allen also issued a stay on the decision, pending appeal, so unlike Utah, nobody's going to be showing up at county clerks' offices to get hitched right away.

We can, of course, expect the usual crowd to make the usual noises about unelected judges trampling The People's sacred right to trample other people's rights, but it's worth noting that, like the judges in Utah, Oklahoma, and Kentucky, Wright Allen cited last summer's DOMA decision, and referred to Antonin Scalia's dissent -- actually, pretty sure that it's now officially his "fiery dissent" -- that once the federal government recognized gay marriage, the next step would be a slew of lawsuits against state bans. We've got to imagine that Nino is just delighted to know that he was so right. Though maybe not quite so ecstatic about just how much proponents of equality have enjoyed quoting him and ramming his opinion back down his throat.

Follow Doktor Zoom on Twitter. He hasn't gotten tired of watching these laws fall and hearing the sound of wingnut heads exploding.