Virginia Lt. Governor Candidate E.W. Jackson Pretty Sure That Old Restraining Order Against Him Was Bogus 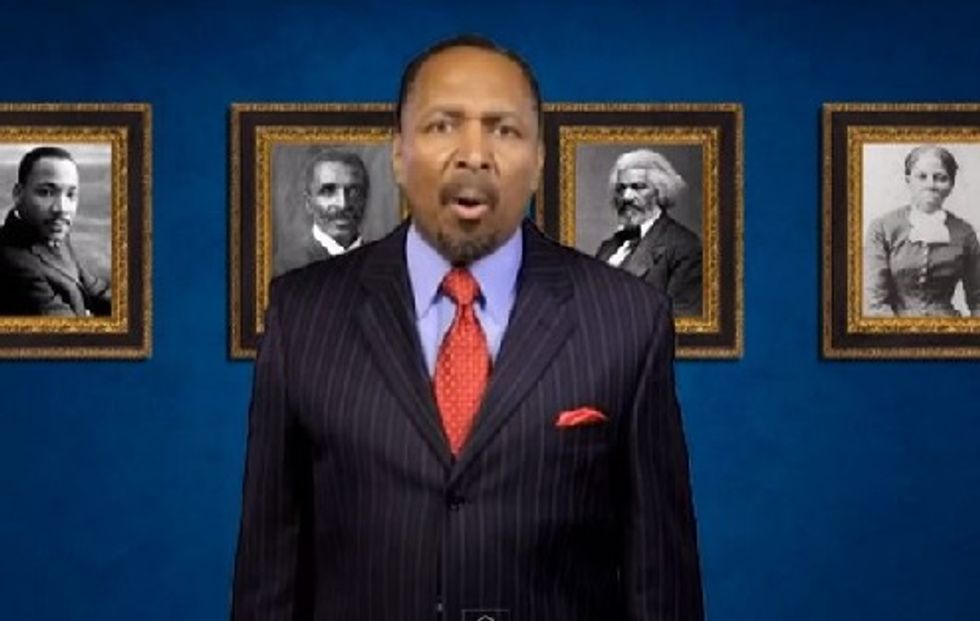 Despite his contention that no one should be allowed toquote stuff from his past, because Jesus + Constitution, E.W. Jackson, the Jesusman running for Leftenant Governor in Virginia, may very well be dogged by some stuff from, you know, the past. Specifically, the revelation that in 2006, a former roommate of his daughter sought a protection order against Jackson, claiming that he had threatened her life. Then again, 2006 was a whole long time ago, and Jackson says that nothing of the sort ever happened, so can't we just get to the important issues, like how non-Christians are all "engaged in some sort of false religion"? What, you people think an alleged death threat is bigger than theology? You have weird priorities, and Jesus is watching you.

Politico notes that documents pertaining to the April 2006 incident were given to them "by a source opposed to Jackson’s election," and in an interview, Jackson "firmly denied" having threatened his daughter's roommate, as he did when interviewed by police at the time. Politico contends that

The incident is the latest twist in a candidacy that’s been highly unorthodox from the start, and highlights the minimal scrutiny Jackson received before the state party’s stunning vote to nominate him last spring for lieutenant governor.

A candidate who had been taken more seriously during the primary would likely have had to address his past involvement in such a sensational legal episode prior to winning the nomination.

Or maybe it's just a really juicy story. Happily, we don't claim to be journamalists, so we'll just dive in and enjoy the soap opera, thank you very much.

Turns out that E.W.'s daughter and her roommate had a "contentious falling-out" that came to a head on April 9, 2006, when Jackson's daughter called police to ask them to send an officer to be present while she moved out. The Jackson campaign showed Politico a police document confirming that an officer went to check on the situation and that the "disposition of the case is listed as 'peace restored.'"

Somewhere in there, things got goofy, because on April 10, the roommate got restraining orders "against Jackson and a third party[.]" For good measure, "Jackson's daughter and a third party" also sought temporary protective orders against the roommate. Politico has no idea what the third woman's role in the fracas was; we've seen enough movies to know that she was probably the real source of the trouble, and to this day no one is the wiser. She was probably a spy, too.

As for the restraining order and the police report, it seems that even though the roomie told police that Jackson had threatened her, and repeated the claim when filing for the restraining order, no further legal action was ever taken against Jackson. And when the roommate appeared in court on April 20, she "requested in open court that the case be dropped."

According to a police report and the affidavit requesting the protection order, the roommate claimed that Jackson had told her over the phone, "You’re going to die, you’re going to leave this earth soon, I’m going to see to that." That doesn't sound like the E.W. Jackson we know and love, because a death threat from him probably would have had a lot more Jesus in it.

Jackson denies ever threatening the roommate, and the lack of any further legal action seems to support his position. At the time of the complaint, Jackson told police that the roommate had called his daughter 15 to 20 times in a single day. Kids! Yeesh.

For her part, Jackson's daughter accused the roommate of -- you'll be shocked to hear this -- threatening her father's life.

Yr. Wonkette's verdict: E.W. Jackson strikes us as a maybe unstable, theocratic loon who should never hold public office. Oh, our verdict on this story? Nope, no idea.