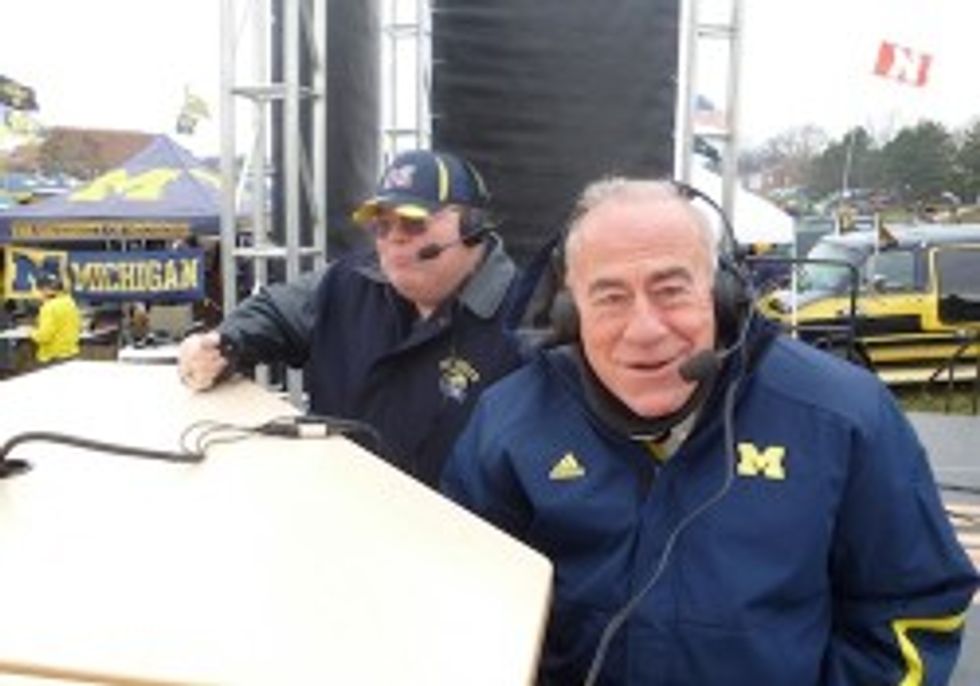 Frank Beckmann, the long-time radio voice of the University of Michigan and severely Caucasian right-wing radio host/newspaper columnist, took time out from his normal activities (holding hands with football coaches and singing Josh Groban songs) to explain to his Detroit News audience that African-Americans shouldn't be ashamed about that whole black people eating fried chicken stereotype because these stereotypes really should be symbols of pride for the African-American community that Frank Beckmann knows and loves so well.

To the politically correct, the mention of fried chicken is an immediate endorsement of slavery rather than a testament to the innovative determination of the American slave population to improve its own physical wellbeing by creating a readily available dish which improved their diet.

Making fried chicken and popularizing it could thus be viewed as an accomplishment that should serve as a testament to the determination of a group of people who found an inventive way to subsist while enduring unimaginable and deplorable living conditions.

But that would remove the opportunity of the political elite to capitalize by creating an atmosphere of victimization.

Right? It's just so awful how these political elites are always convincing black people that they are victims of centuries-old institutions of slavery and Jim Crow when really those events were opportunities created specifically so African-Americans could demonstrate their "innovative determination" to not starve to death while in the throes of bondage and involuntary servitude.

Finally someone is brave enough to stand up and say slaves and their descendants who've been subjected to lynching, de jure and de facto segregation, institutionally-created poverty, and all manner of prejudice are not victims of anything at all. Thankfully, Frank Beckmann mustered the courage to put the "political elite" in their place and to tell the blacks to quit belly-aching and raise those drumsticks like poultry-based torches of freedom, which they totally are!

Why was this heroic wingnut talking about fried chicken, you ask? Oh, because Spanish golfer/choke artist Sergio Garcia (zero major wins) upped the ante in his mean girl spat with Tiger Woods (14 majors, second most all-time) by "joking" that he'd serve fried chicken if ever he had Woods over for dinner. Beckmann cares not for you "politically correct" monsters who would attack poor Sergio Garcia because you don't care for his nuanced, high-brow sense of humor.

Political correctness serves to divide us rather than unite us.

From the sports world, golfer Sergio Garcia is the latest to feel its sting of this simplistic and harmful concept.

Garcia jokingly remarked that he’d try to make amends for his recent on-course dispute with Tiger Woods by having the world’s most famous black golfer -- Garcia never mentioned race -- over to the house for a dinner of fried chicken.

Gawd dummit, why is political correctness always trying to divide us when Americans of all races, colors, and creeds seek the unifying power of racial stereotypes? It's like something happened to this country recently to make us not like what we were. What happened to the good old days when blacks were proud of fried chicken stereotypes, when Jews knew it was a compliment to be considered shrewd with money, when Italians didn't mind that everyone just assumed they were mafia, etc. etc.? Does anyone know? Frank Beckmann, a desperate nation turns to you for answers?

The Garcia controversy, and its aftermath, is more a measure of the thickness of our skin rather than its color.

We would be better served to save our indignation for much more important issues like the overwhelming attacks on American freedom through the dismantling of our Constitution by the current Obama administration. That makes victims out of all us, regardless of race, religion, or ethnicity.

Obama! Of course, it's his fault. It all makes sense now.

Thank you for clearing that up for us voice of University of Michigan football. Go blue!