Wait, You Don't Want Poppy Bush To Grab Your Ass From His Wheelchair? WHY EVER NOT? 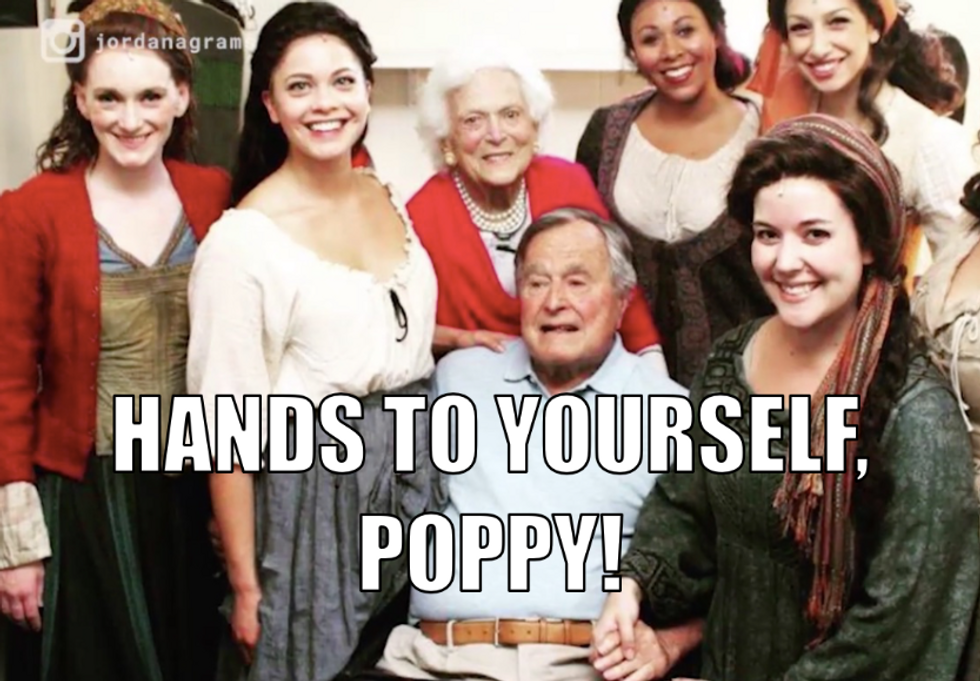 OH, VOMIT! VOMIT! VOMIT! Yet another woman has come forward to report that former president George H. W. Bush grabbed her buttocks and joked about his favorite magician "David Cop-a-Feel." Via Deadspin,

“We all circled around him and Barbara for a photo, and I was right next to him,” she says. “He reached his right hand around to my behind, and as we smiled for the photo he asked the group, ‘Do you want to know who my favorite magician is?’ As I felt his hand dig into my flesh, he said, ‘David Cop-a-Feel!’”

[She] says others in the room “laughed politely and out of discomfort.” Former first lady Barbara Bush was among those nearby. “[She] said something along the lines of, ‘He’s going to get himself put into jail!’ to which we laughed harder,” [the woman] says.

Ewwwwwww. Can we all agree to NOT laugh it off any more? This is not okay, and it will only stop being "okay" when it stops being a joke. A man has no more right to squeeze a woman's behind than he does to grab $20 out of her pocket. NO MORE!

And this statement by Bush spokesman Jim McGrath is not going to cut it.

At age 93, President Bush has been confined to a wheelchair for roughly five years, so his arm falls on the lower waist of people with whom he takes pictures. To try to put people at ease, the president routinely tells the same joke — and on occasion, he has patted women's rears in what he intended to be a good-natured manner. Some have seen it as innocent; others clearly view it as inappropriate. To anyone he has offended, President Bush apologizes most sincerely.

You're sorry if women were offended by your "good-natured" grabassing? Really? That's the line you're going with while the entire media landscape is one brushfire of sexual harassment allegations? Maybe PR isn't really your thing, dude.

And OH HAI, BUSH CLAN! Not for nothing, but you're getting a once-in-a-lifetime opportunity here to launder your image. President Trump is so awful that we're actually feeling nostalgic for presidencies that were merely quagmire recessions, not a corrupt, earth-melting apocalypse. So maybe don't blow your chance by parking Poppy's wheelchair in the middle of a group of young women and telling everyone to lean in for a photo. The guy is 93 -- of course he's disinhibited! It's not on the victims to preserve the old man's legacy by laughing it off when he gropes them. If your father/husband/grandfather thinks he's living in an episode of Mad Men, you need to deal with that yourselves. Because that show is off the air, and women are not going to put up with that shit anymore.

Please help us to keep the servers humming and the tax man off our backs! Clickety click!