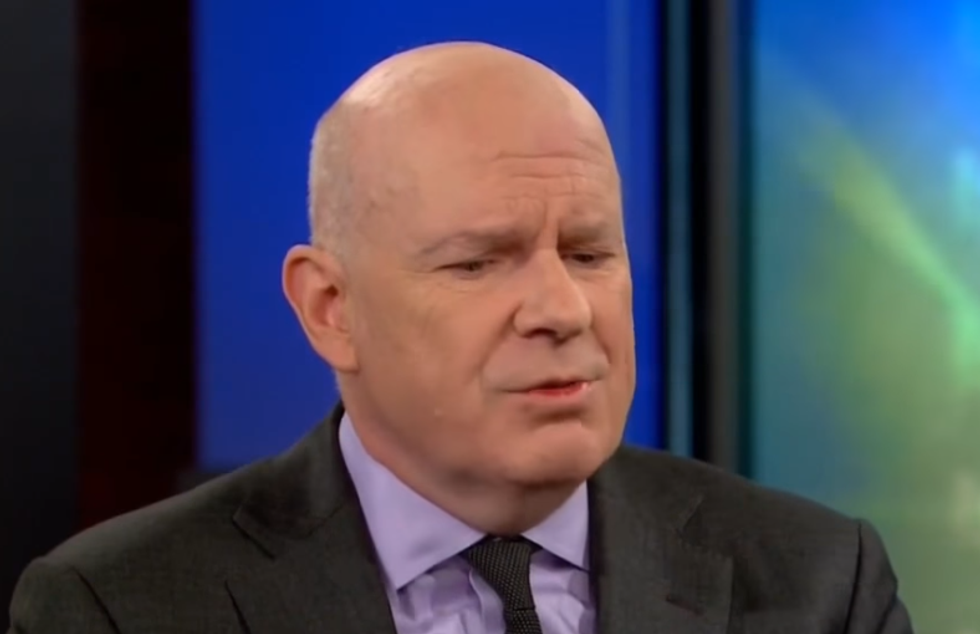 WSJ editor won't call Trump a liar, therefore we will screengrab him all ugly.

In eighteen days, Donald J. Trump, who lies a lot, will be officially crowned Liar-In-Chief of the United States. In 2015, Politifact awarded its Lie Of The Year to basically everything that came out of his mouth. According to the site's current tally, only 14% of Trump's statements rank as outright true, whereas 18% are "mostly false," 33% are "false," and another 18% achieve the "pants on fire" rank of lying. HE LIES A LOT.

So naturally, the editor of the nation's second largest newspaper should announce that his paper will not be reporting Trump's lies as "lies," because that's unfair and mean and doesn't let readers decide, based on their immense expertise, whether Trump is lying or not, right? Because that's what Gerard Baker, editor-in-chief of the Wall Street Journal, told Chuck Todd on Sunday's "Meet The Press":

I'd be careful about using the word "lie." ... "Lie" implies much more than just saying something that's false. It implies a deliberate attempt to mislead. ... When Donald Trump says thousands of people were on the rooftops in New Jersey on 9/11 celebrating, thousands of Muslims were there celebrating, I think it's right to investigate that claim, to report what we found, which is that nobody found any evidence of that whatsoever, and to say that. I think it's then up to the reader to make up their own mind, to say this is what Donald Trump says, this is what a reliable, trustworthy news organization reports, and you know what? I don't think that's true.

I think if you start ascribing a moral intent, as it were, to someone, by saying that they've lied, I think you run the risk that you look like ... you're not being objective. And I do think also it applies ... people are looking at what Donald Trump is saying, and saying this is a false claim, and I think people say, "You know what? Hillary Clinton said a lot of things that were false." I don't recall the press being quite so concerned about saying that she lied in headlines ...

BOTH SIDES DO IT! On one hand, maybe they didn't do that with Hillary as much because, as Politifact found, the majority of the statements she made were at least "half-true," and literally only 2% of her statements achieved the "pants on fire" rating. In other words, Donald Trump Lies A Whole Fuckin' Lot More Than Hillary Clinton would have been a good Wall Street Journal headline during the campaign! (In fact, the Journal had lots of headlines, on opinion pieces, calling Hillary a liar.)

[wonkbar]<a href="http://wonkette.com/608441/dear-media-hi-go-fuck-yourself"></a>[/wonkbar]On the OTHER hand, news organizations did spend half the campaign reporting breathlessly on Hillary's emails, quite nicely insinuating that she was guilty of something, that she was corrupt, when all the myriad investigations into her emails, Benghazi, and the Clinton Foundation found that OOPSIE, she didn't do anything wrong. Did people get that message from the Wall Street Journal? Doesn't seem like it!

[wonkbar]<a href="http://wonkette.com/609317/whats-up-with-how-teen-vogue-is-so-badass-lately"></a>[/wonkbar]As Think Progress notes, the example Baker picked to explain how the WSJ will "report" on Trump's falsehoods, is a particularly egregious lie, since Trump said he saw all those Muslims bouncing around on New Jersey rooftops like "YAY LOL!" on 9/11 on TV, and everybody saw it, wait what, you didn't see it? Of course you didn't see it, because Trump is lying. (Hey, remember that great article Teen Vogue's Lauren Duca wrote about how Trump is gaslighting America? This is a good example of that!)

The fact is we have a president-elect who lies with such breathtaking frequency, unparalleled in American politics, that our "reliable, trustworthy news organizations" have a responsibility to call him a liar ALL THE TIME WHENEVER HE LIES, and stop worrying about whether the idiots who voted for Trump think they are being BIAS! by reporting Trump's lies. Let's remember that Trump has fostered a post-truth environment that will continue on a grand scale in his presidency, and that half the thugs and paste-lickers who love him are convinced that Alex Jones and Sean Hannity report the REAL "news," whereas papers like the New York Times, Washington Post, and yes, the Wall Street Journal, are liberal lying liars who are part of the conspiracy to keep The Real Trumpian Truth from people like them.

Let's also remember that Trump will have a vigorous propaganda Ministry Of Truth of friendly news organizations set up for him, devoted to only and always Lying For Trump.

The other major papers, so far, aren't completely rolling over for Trump. The WaPo is leading the way, by creating a browser extension that fact-checks Trump's tweets in as close to real time as they can. THAT is a good example of how to combat the vomit waterfall of lies that comes out of Trump's mouth every single time he opens it.

And even the Times, which sucks so much, is willing to step up and call Trump a liar when he lies, which is all the time, according to Think Progress. Here's NYT Executive Editor Dean Baquet, in an interview with NPR:

“I think the moment for me was the birther story, where he has repeated for years his belief that President Obama was not born in the United States. That’s not an obfuscation, that’s not an exaggeration. I think that was just demonstrably a lie, and I think that lie is not a word that newspapers use comfortably,”

Look, we get that news organizations are in uncharted waters with a Trump presidency. The question is, do THEY get that they are in uncharted waters? Or are they just going to sniff at Trump's panties and let him get away with lying? Sounds like Rupert Murdoch's Wall Street Journal, at least, has decided to coddle Trump, therefore everybody should cancel their subscriptions, wait LOL, you don't have a subscription to the Journal, because it blows.