Wall Street Traders May Soon Have To Live On Burger King 'Whopperitos.' The Horror. 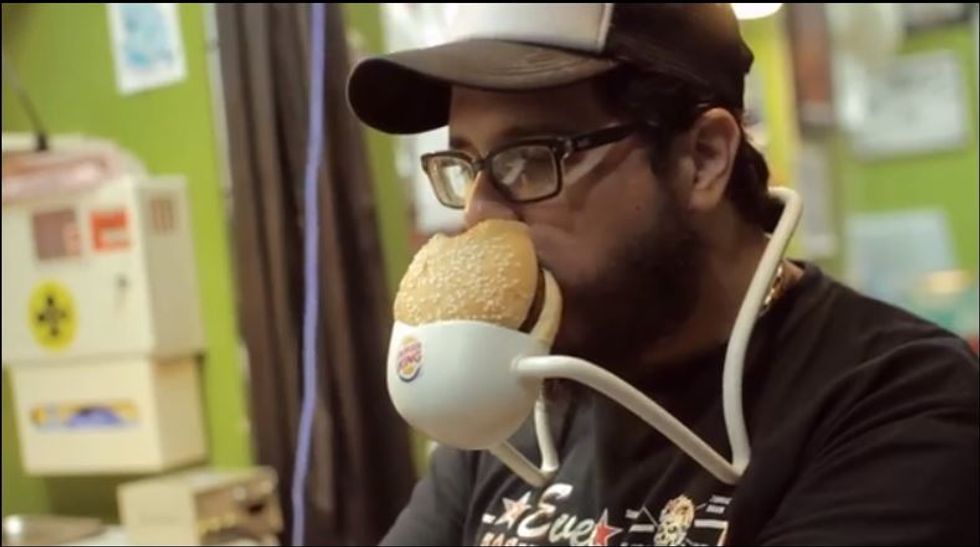 Guys, big banks just need a few more years to figure out how to add more loopholes to financial rule

Esteemed Wall Street banks are on their knees asking the Fed for five more years to comply with the Volcker rule, a rule limiting what banks can do with our monies. Originally conceived as part of the 2010 Dodd-Frank bill, the Volcker Rule aimed to prevent banks from taking huge, non-disclosed gambles with their assets that might prevent them from ensuring our deposits in the small chance said Wall Street banksters weren't the smartest people in the world. You may remember all the hits from 2007 & 2008: swaps, CDOs, dong indexes (OK, we made one of those up -- BUTH WHICH???).

But banks don't want to return to being low-key and responsible middlemen so they've been fighting the rule with intense lobbying efforts since its inception. As the Rule's effective dates (2015-17 depending on the size of the institution) approached, some banks were given year long extensions to comply. Now some banks, including bad boys like Goldman Sachs, Morgan Stanley, and JPMorgan Chase are asking for an additional five years to comply with parts of the Rule. Specifically, these firms, which are seemingly able to create financial instruments out of thin air when it $uits them, are having trouble unloading certain "illiquid" assets:

"It's laughable that the biggest, most sophisticated financial firms in the world claim they can't sell the stakes year after year," said Dennis Kelleher, CEO of non-profit Better Markets. "Everyone else in America has to comply with the law and Wall Street should also."

No Dennis, it's laughable that you think they have to comply with the law instead of manipulating it so they can make more shitty bets. Because they're bad at it. So they need all of the help.

Before the crisis, big banks had proprietary trading desks that made bets on market direction, as well as in-house hedge funds, investments in external hedge funds and co-investments alongside clients in internal private-equity funds. Underlying assets could range from investments in private companies to real estate and long-dated derivatives.

While the regulated banks have spun off much of that activity, bankers say there are still some investments that do not contractually expire for years or lack a liquid market for an immediate sale. But disclosures are few and far between, making it difficult to independently discern how truly illiquid the investments are.

Oh, you don't say? Well, we should just give them all the benefit of the doubt and grant that extension until a more enabling Congress, administration and regulatory apparatus can eliminate the rule in its entirety.

This Week In Corporate People Just Like Us: Corporations Have Values Too

As a wise bot once said, "Corporations are people, my friend." In addition to speech and religious rights, Corporations have complex value systems.

At least that's what Apple CEO Tim Cook believes. During his five years as head of America's Favorite Brand, it's true that Apple has taken steps to mitigate its environmental impact. It's true that Apple generally stands up for the LGBT Community. And there was that one time they took it to the Feds on behalf of Privacy Rights and public relations. Of course, the exploitation of its foreign labor force is a more difficult problem to address. I guess you can't win 'em all. Especially if you're a Congolese child with no stock options who is toiling in a cobalt mine.

The problem with establishing long-term goals and investing in long-term products or socially responsible practices is that shareholders also have feelings. And those feelings are usually outrage at the failure to focus on maximizing share price. So some people are not happy with some of Apple's sunk costs and commitment to certain environmental goals. But the joy of being a Corporate Person is the inability to feel shame or guilt and that cuts both ways. So priorities can change on a dime. We blast Apple, but will take the time to acknowledge it might be a slightly more fully formed corporate person than, say, Peabody Energy. (While we're glancing at and then away from bad coal companies, have you gone here yet to sign up for wind and/or solar? You don't have to own your house to buy solar, the EPA is all for it, and -- disclosure! -- your Wonkette gets a few bucks.)

This Week In Product Innovation: The 5-Alarm Whopper Burrito

No wonder there's so much "cultural anxiety" among certain factions of society. In the latest capitulation to the Mexican-ing of our most precious resources, the iconic Whopper will be topped in queso sauce, wrapped in a tortilla and christened the Whopperito.

Burger King, the one of you who actually followed through on its threat to move to Canada, will offer this Frankenfood for the low price of $2.99. But can we really put a price on gastric distress? (Yes. It's $2.99.)

This Week In Bonuses: Life is hard out there on the Wall Street

The horror. The horror. Wall Street traders' bonuses could be down by 15% this year. Think of all the high-end blow that won't be snorted off of high end silicon.