Walmart Real Sorry About 'Back-To-School' Guns, Which They Also Deny Happened, Or Something 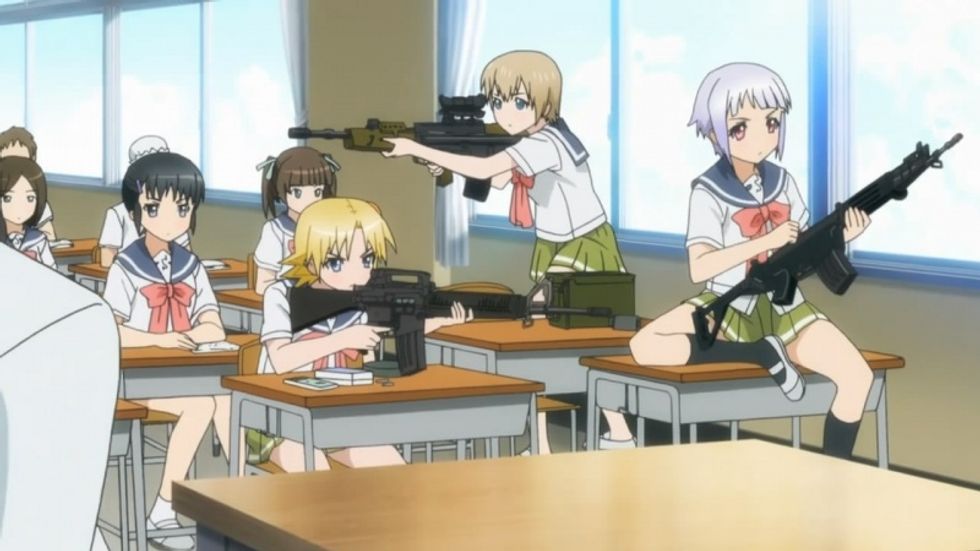 All the schoolgirls in 'Upotte!!' are anthropomorphized guns, so they don't need to shop at Walmart

Walmart the corporate entity has apologized for a display of guns in an as-yet-unidentified Walmart store with a sign over it reading "Own the school year like a hero." The image blazed across social media with the speed of a .223 caliber round fired by a responsible armed citizen from an AR-15, causing more than a few WTFs and outrage. The Washington Post notes that the sign "appears to be part of an ongoing superhero-themed marketing campaign that is not related to guns." Here's just one of many instances of the picture:

A spokesperson for Walmart, Charles Crowson, said the chain is still working to identify the store, but that while the display and the layout of the store look like a real Walmart, it's unclear whether the sign was placed on top of the gun cabinet by an employee or a shopper (but probably not a Photoshopper):

“What’s seen in this photograph would never be acceptable in our stores,” he said in a statement. “We regret this situation and are looking into how it could have happened.” He declined to comment on the connection critics were making between guns and mass shootings on school campuses.

He said that early online claims that the store was in Evansville, Illinois, were not correct, although the person who took the photo, Leeanna May, says that's where the display was:

May said she was in Evansville on an early-morning shopping trip Wednesday with her husband when they walked by the sporting goods section, where May spotted what she called a “disgusting” display.

“We have already lost so many innocent lives to guns,” she said, adding that she drew an immediate connection between firearms and school shootings. May said she alerted store employees but could not find a manager.

Tweets from the Walmart corporate account sure look like it was in the store May said it was:

WaPo says Crowson didn't respond to a request for an explanation of the discrepancy between his denial and those tweets. And in the meantime, Leeana May has set her Twitter account to private, no doubt thanks to gun-humpers accusing her of having moved the sign herself to make perfectly innocent guns seem like they might somehow be associated with school shootings. Fortunately, the Twitter Detective Squad was ON IT:

So it looks like a "joke" -- either by a customer or some Walmart employee who will suffer the ignominy of being too big a dope to work at Walmart, and no, this is not Walmart's actual corporate policy, which is plenty horrible enough.

At least one Tweeter found something halfway original to say about the online fuck-tussle:

So stop worrying, everyone! Walmart is still selling guns to all (minimally qualified) comers, but it isn't openly promoting them as back to school supplies. The kids will have to figure that one out all on their own.

Yr Wonkette is supported by reader donations. Please click the "Donate" linky so we can get that Kevlar laptop cover.