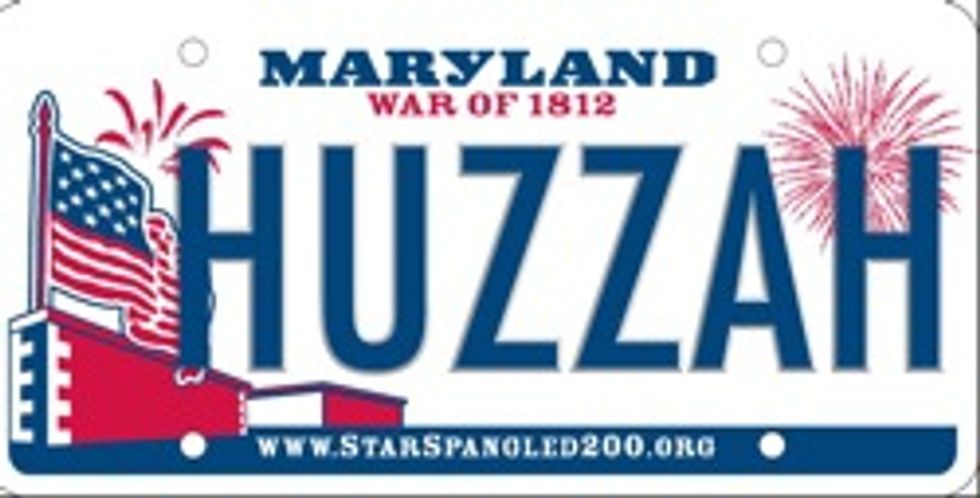 ImportantWashington Post person Ashley Halsey III found some online poll on the paper's website, and the results are apparently worth an article: PEOPLE DO NOT LIKE THIS WAR OF 1812 MARYLAND LICENSE PLATE DESPITE THEIR ALLEGED PATRIOTISM.

The poll is unscientific, Halsey notes, but it found "86 percent of respondents were unimpressed." (Actually if you look at the poll, it does not even have an option for "unimpressed." When will a correction be printed, Ashley III?)

And also he said this: "The design is directly taken from the way the ramparts looked." Directly. The ramparts looked like a giant flag pin sticking out of a child's toy box with some clip-art fireworks thrown about. Bill Pencek would know because he was there.

Then Pencek got really defensive about the plate design. It was a COMPLEX PROCESS, MARYLANDERS. "We were trying to brand the flag." They almost had the flag smoking a cigarette and going down a mountain on a snowboard but ultimately decided on this thing.

Then Pencek got desperate. They made the license plate ugly ON PURPOSE AND TOTALLY KNEW IT WAS NOT VERY BEAUTIFUL ALL ALONG because they didn't want to take away money from herons and farms, who receive proceeds from the plates they're depicted on, he said.

"We didn't want to compete with the other background plates," Pencek said. "There was an intention to be beautiful, but not more beautiful than the bay plate or the farm plate."

That's a nice sentiment, but it's more important that we pay off our war debts from 1812. Seems like there's been a long of time and a lot of inflation to still have debt on that.

So buy this stupid license plate, people of Maryland. These War of 1812 people desperately need your license plate money and any gently-used ironclads you don't want anymore. [Washington Post]