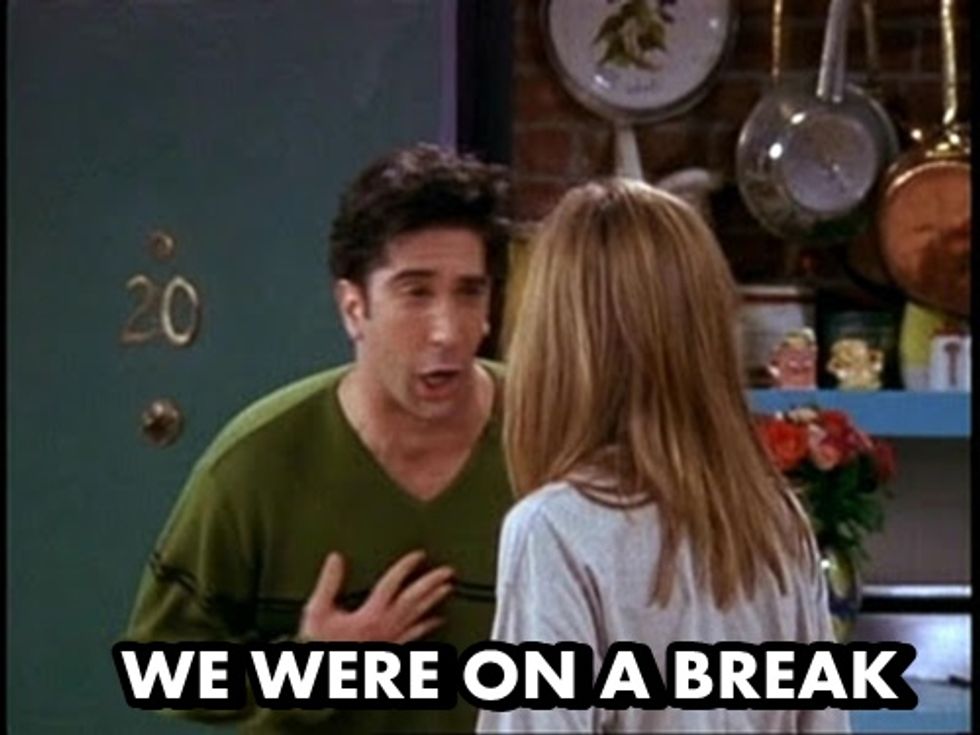 The 90s. We remember those.

The Washington Post's Jennifer Rubin has written a Dear Reince letter to the GOP, and it's full of all the sadness and nostalgia you'd expect from someone who's keenly aware of how badly she and her former love have drifted apart. But it's not her. It's the party that's gone nutty over this new boy with the funny hair, and until the GOP straightens up and flies right, Jen Rubin is simply not going to be seen wearing its letterman's jacket anymore, OK?

Things used to be warm and close; she remembers the good times:

Yes, yes, I know we’ve been together since the 1980s. We used to have so much in common — winning the Cold War, free enterprise and most of all a can-do attitude about America. Our closest friends – the Reagans, the Bushes and later the Romneys – were admirable, and how proud we were to be in their company. What nice, upstanding types they were. We believed in standards, civility and — how quaint! — facts.

Facts like "trees cause pollution" and "slashing tax rates will create so much growth we'll eliminate the deficit," and "we'll be welcomed in Baghdad as liberators," we guess. Oh, and Mitt, what a man he was! We still remember how she predicted in 2012 that the Obama campaign simply couldn't bear "the thought that the well-traveled Mitt Romney will make a nice impression on his overseas tour” -- whereupon Romney proceeded to tell London what a crappy job they'd done of preparing for the Olympics, and managed to get yelled at by an entire country that wasn't the USA.

But something went wrong. The tone turned ugly. Back in the good old days, she says,

The surly ones were on the left. Nothing was ever good enough for them. The grass was always greener on the other side of the Atlantic.

Then our relationship got, well, difficult. In lieu of interesting discussions, there were arguments. Yelling. Accusations. Feelings of betrayal. Instead of fighting the Democrats, we spent precious time and energy fighting one another ... Suddenly it became chic to be angry and ignorant, and awkward to step outside the conservative cul-de-sac. Folks who had been preaching the gospel of personal responsibility became professional victims. The MSM! The MSM! Enough with all the whining.

We too remember the happier times, when Jen Rubin would never stoop to whining about the media. Like when that petulant Barack Obama got angry at Congress for failing to pass even modest background check legislation after Sandy Hook, and the media hardly even noticed how petulant and unpresidential he was: "because most of the press also was incensed at the defeat of anti-gun legislation, his performance was barely criticized."

But she could overlook a little infighting if it weren't for the party's embrace of that uncouth Trump boy, and Reince Priebus sounding "like a liberal" coming to his defense and making excuses for bad behavior. Remember, this is a columnist who explained that George Bush was a pretty awesome president who had a "clear moral compass," as long as you're OK with just a little torture. And she also praised the sharp wit of John "Comedic Genius" Bolton, who was such a hoot:

Show his sense of humor. He’s a very witty guy (think Bob Dole with a fabulous moustache.) One of his best lines: “The Secretariat Building in New York has 38 stories. If you lost 10 stories today, it wouldn’t make a bit of difference.”

LAFF RIOT! Oh, remember when people used to know how to have fun?

Jen Rubin longs for the days when our political discourse was about something meaningful. Like all those times she scolded the Obamas over matters of substance, like Barack Obama being late for things all the time, or Barack Obama making Old Pope's resignation all about Barack Obama (by saying nice things about having met him), or that horrifying time Michelle Obama uncouthly made the Oscars all about her by appearing on a video monitor for two whole minutes. What narcissists those Obamas are!

Still, Rubin remembers how it used to be. Maybe she can patch things up with her old party, or maybe she'll find a new one. Perhaps after the GOP comes to its senses when Trump leaves it crying at the ballot box, it'll be ready to be serious again. And she has some excellent advice for the Republicans, while they're on their break:

You work on your anger management issues. Turn off Fox News and turn on the History Channel. Make some friends who don’t think just like you. Tolerate some iconoclasts.

Oh, Jen, honey. You haven't actually watched the History Channel in a while, have you? It's all ancient aliens now, dear. But that's a nice point you make about being angry all the time. It's probably not good for anyone. Why don't you write a good old-fashioned scolding of Barack Obama for looking unpresidential and bringing shame on America. That'll cheer you right up.

Also, maybe you should listen to a fine old breakup song: