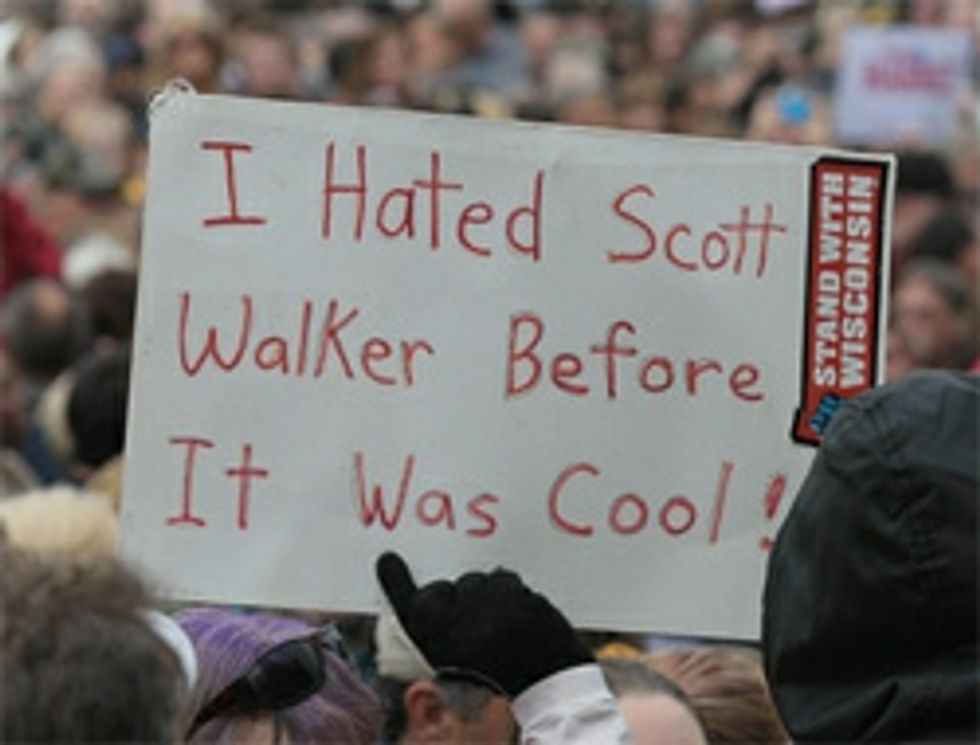 Judson Phillips is known to your Wonkette as a guy who once wrote that Barack Obamajust might be a crack-smoking gay sexer, which was fun. Now he's got some words in the Washington Times (yeah but still) about how the current criminal probe into Wisconsin Gov. Scott Walker's Forever Campaign (because he is always being recalled) is "political terrorism," and the Bush-backed special prosecutor on the case is a "political terrorist." Ha... ha?

See, Scott Walker had some friends who worked for him and/or gave him money, and now those folks  have been convicted of various crimes, so sad! Bad friends that they are, they've allegedly said some things that amount to: "Scott Walker's campaign did such and such crimes." None of this is mentioned in Judson's column of course, because shut up, it's political terrorism something something gay marriage.

No, really, he manages to work in gay marriage! Check it out:

Does anyone believe that if these donor lists were turned over to a special prosecutor they would remain secret?

A great example of what the left is doing is California in 2008 and 2009. California passed Proposition 8, which defined marriage as a union between one man and one woman. The left went nuts.

Liberals obtained copies of the donor list for a number of groups that supported Proposition 8 and then went on a rampage.

Oh, we get it, this is just like that, what with the liberals, and unions. Civil unions...? Sure whatever. And yeah, we also remember the liberal "rampage" after Prop 8, the riots, the arson, the assassinations. Bedlam, it was, in history, that happened.

Uh-oh, now we are feeling kind of dirty for calling attention to Judson Phillips. On the other hand, the Washington Times is one of Antonin Scalia's favorite papers, so maybe it's our duty or some shit?

Partial credit to Judson Phillips however, because while he calls people who are just doing their jobs "terrorists" -- you know, the word that means "it is okay and maybe even virtuous to kill this individual" -- he does suggest a non-violent response:

Every conservative group that is served with one of those subpoenas should publicly say they have, refuse to comply and take the Wisconsin special prosecutor to Court.