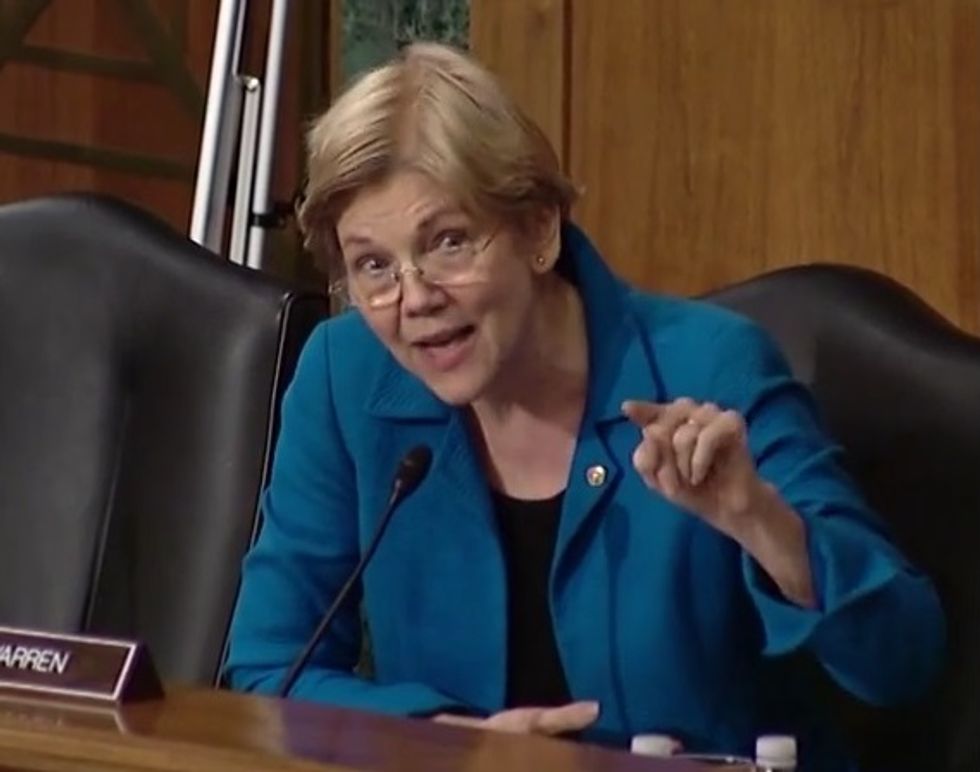 Welcome to episode seven million of our popular series, "Elizabeth Warren Gets Righteous On A Douchebag." The schmuck in the hot seat this time around is one Leonard Chanin, who during the George W. Bush administration was Deputy Director of the Division of Consumer and Community Affairs at the Federal Reserve Board. His office was one of several agencies that had the authority to regulate the speculative markets in subprime loans, but instead blithely sat back and watched that market and the economy burst into thermonuclear flames.

Chanin was ostensibly at Tuesday's hearing of the Senate Banking Committee to testify about how regulation of consumer finances is a terrible thing for both consumers and banks, because as the Republicans who run the committee know, all regulation is bad. Elizabeth Warren wasn't about to have a bit of that nonsense, and tore into Chanin.

Of all the people who might be called on to advise Congress about how to weigh the costs and benefits of consumer regulations, I am surprised that my Republican colleagues would choose a witness who might have one of the worst track records in history on this issue.

She treated the committee to a little history lesson, noting Chanin's role in letting the 2008 financial meltdown develop. Let's be honest here: her real audience wasn't the never-regulate-anything dolts on the committee, but the tens of thousands (so far) of people who'll watch this on YouTube.

Chanin, Warren pointed out, “helped lead the Federal Reserve division that refused to regulate deceptive mortgages — including the subprime lending that helped spark the crisis.” Warren noted that the bipartisan Financial Crisis Inquiry Commission called Chanin’s lack of oversight while at the Federal Reserve a “pivotal failure” and the “prime example” of the kind of hands-off regulatory approach that allowed the crisis to happen.

“You did essentially nothing,” Warren told Chanin, who has since left the Federal Reserve to work for a private law firm advising big banks. “Now, your failure had devastating consequences.” Chanin was brought forth by Republicans to argue against regulations like those imposed by Dodd-Frank.

Warren had no plans to go along with that agenda, thank you very much, and rejected the very idea that Chanin is any sort of expert at all:

So when you talk now about how certain regulations are too costly or too difficult to comply with, you sound a lot like you did before the 2008 crisis when you failed to act. So my question is, given your track record at the Fed, why should anyone take you seriously now?

Senator Feistypants reminds us why we love her in this video. When Chanin tries to get away with a whopper, claiming there was "simply no data presented to the Fed on a statistical basis that suggested that there was a meltdown in the mortgage market in 2005 or 2006,” Warren is clearly incensed that even after multiple investigations have found his office responsible for ignoring the signs of impending collapse in the subprime bubble, he's still claiming it was a complete surprise to everyone:

Warren: I’m sorry, are you saying there were no data in the lead up to the financial crash that showed the increasing default rates on subprime mortgages and what they were doing to communities across America? Did you have your eyes stitched closed?

Chanin: There was anecdotal evidence to be sure, but there was no hard data --

Warren: I'm not talking anecdotal. Are you telling me you never saw any data about the increases in mortgage foreclosure rates before the crash in 2008? Is that what you're saying here?

Chanin: No hard data was presented to the Fed until the crisis erupted

Warren listed several investigators and officials, including the Financial Crisis Inquiry Commission and former Fed chair Alan Greenspan, who said Chanin's office and his inaction had driven the collapse, pointing at him and saying "That was you."

If you are still defending your time at the Fed, and saying you had no information about a problem that was emerging, then frankly, that raises even more questions about your judgment.

We enjoyed watching Chanin squirm. So will you. Watch this video again and again. It's much better than Cats.