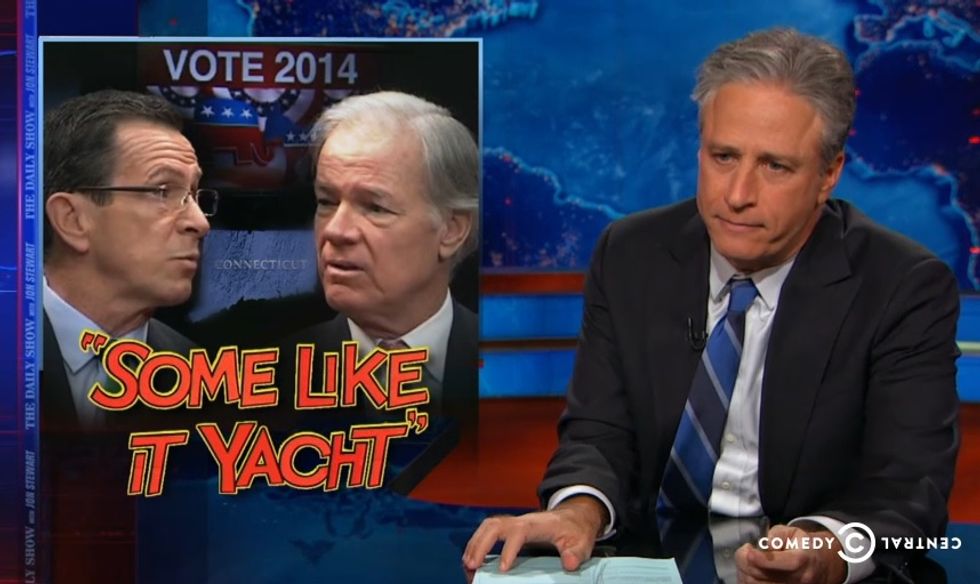 Jon Stewart brings us more yummy electoral goodness, starting with a brief montage of precious election moments: Mitch McConnell's bizarre b-roll ad and subsequent #McConnelling, Charlie Crist's fan,Joni Ernst cutting nutz, and New York Republican Michael Grimm and his beautiful fraud indictments -- not to mention his offer to break a reporter in half "like a boy" for asking a question about it (somehow, Stewart really doesn't mention it).

That's one hell of a lot of stupid for one year, but Stewart claims that a new pile of dumb from the Connecticut governer's race is the "bat-shittiest" of all. At issue is Republican Tom Foley's boat, which is named "Odalisque" -- a term that one questioner insisted can only mean "sex slave," because that's what Wikipedia sez. Foley insists that his use of the name comes primarily from the term's secondary meaning, deriving from its use in art history for all those Romantic paintings of reclining nekkid ladies, which is frankly what we first think of when we hear the word too, given our tendency to look back in Ingres.

We will reserve judgment on whether this debate truly is the most batshit of the election season, because of information overload: there's simply far too much dada to sort through. The upshot, however, seems to be that every politician in Connecticut has a boat named after a hoor.

Watch and enjoy! We liked the Rothko joke best.