cpac 2014feargunsNRAparanoiapt load up on guns and bring your friendswayne lapierre 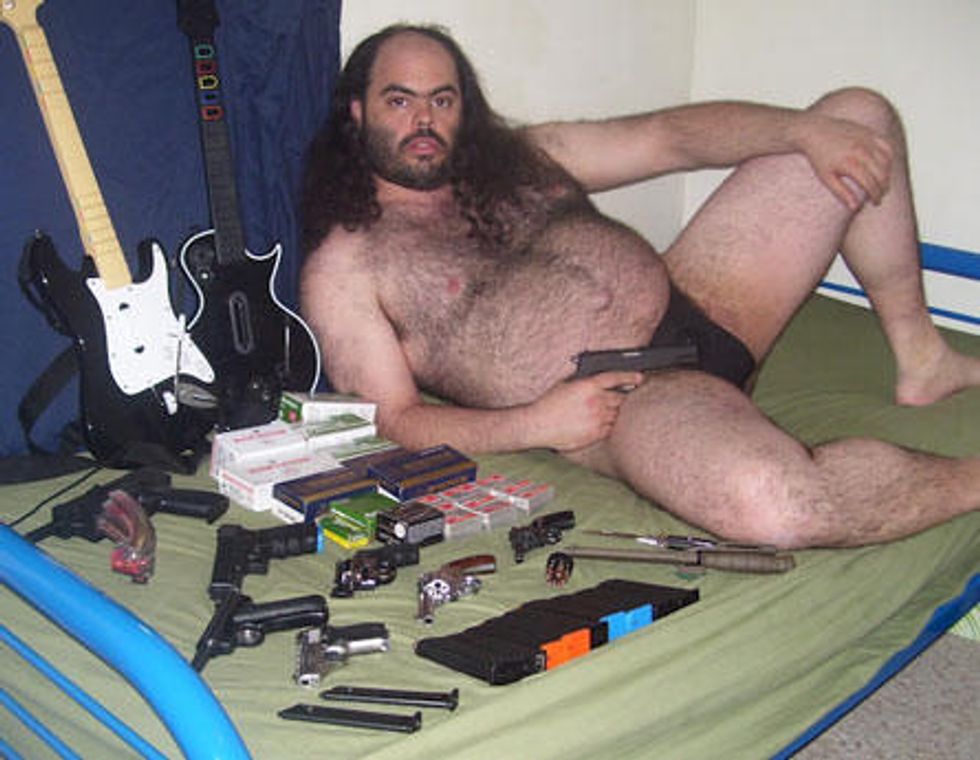 National Rifle Association CEO and Executive Vice President Wayne LaPierre admitted that he and most gun fondlers are motivated by fear, although he didn't quite put it that way. At CPAC Thursday, the gun fetishist in chiefshared a vision of America as a paranoid hellscape:

“We fear for the safety of our families. It’s why neighborhood streets that were once filled with bicycles and skateboards and laughter in the air, now sit empty and silent ... [For] the things we care about most, we feel profound loss. We're sad, not because we fear something is going wrong, but because we know something already has gone wrong. That’s why more Americans are buying firearms and ammunition.”

It's nice to see Mr. LaPierre admit that the right's obsessions with guns is largely driven by fear, and is largely a matter of perception. Poor man came remarkably close to something like an insight there, and then decided that the paranoid response is the reasonable answer, not a symptom of how sick the gun fondling worldview is.

Obviously, the real problem is that Barack Obama is president, and wants to take your guns away while he Benghazis and Solyndras and Fast and Furiouses all over the place. Even worse, the mainstream media is intent on lying about guns, presumably by reporting on things like the Newtown massacre without ecxplaining that if every teacher there had had a Desert Eagle on her hip, everything would have been fine. The problem, he said is that the media no longer "expose government dishonesty and scandal like they used to" -- he must mean Watergate, don't you think? We bet most folks at CPAC would love that example. Sadly, said LaPierre, the only things mass media care about today are “entertainment, ratings, personal celebrity and the next sensational story… truth be damned.” It's nice to see that Wayne LaPierre has discovered Newton Minow's 1961 speech about TV as a "vast wasteland" -- it really is a timeless critique.

LaPierre was, of course, especially peeved that the NRA is not portrayed as the bastion of goodness and decency that he knows it to be:

“They hate us, just for saying out loud and sticking up for what we believe, as if we have no right. So they try to ridicule us into oblivion or shame us into submission."

We don't know that ridicule is all that necessary, of course, when simply reporting what Wayne LaPierre says is usually sufficient. Even so, LaPierre pledged that his incredibly well-funded organization, which is capable of making life hell for any public figure who suggests the slightest reform of gun laws, will continue to fight like a plucky band of ragtag rebels:

“The media’s intentional corruption of the truth is an abomination and NRA members will never -- and I mean never -- submit or surrender to the national media.”

Huge applause line, of course, cold dead hands and everything, and despite its meaningless defiance -- is Big Media surrounding him and telling him to come out with his hands up? -- it's completely in keeping with the paranoia that ran through the speech. Fear sells, and Wayne LaPierre has a pretty good racket going.

"We trust ourselves. And we trust what we know in our hearts to be right: We trust our freedom. In this uncertain world, surrounded by lies and corruption everywhere you look, there is no greater freedom than the right to survive and protect our families with all the rifles, shotguns and handguns we want!”

Oh, OK, we suppose maybe you guessed that.