We Are All A Science Idiot: Your Saturday Nerdout 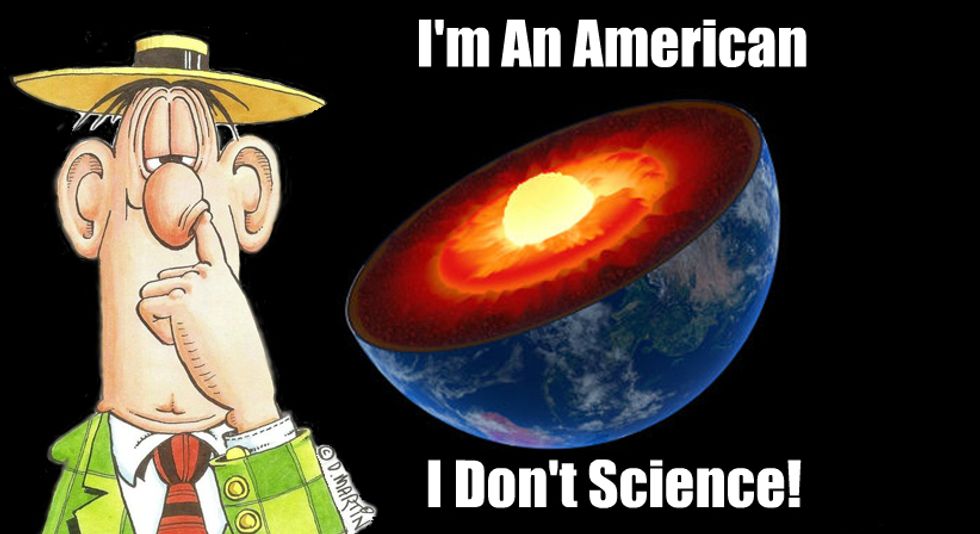 In Fonebone We Trust

As the famous public intellectual Dave Barry observed back in the nineties, one of the few areas where America still excels is the production of studies showing that Americans are really, really stupid. Or something like that; we were too lazy to look up the exact quote. The point here is that we've got another one! In a recent Pew Research Center survey on 12 basic science questions, only a very tiny percentage of Americans got them all right. But this is not necessarily cause for despair, either, since "Overall, Americans gave more correct than incorrect answers -- good!" We do in fact know some stuff pretty well, like who developed the polio vaccine, what a light-year measures, and what kind of waves are used to make cellphones work (answer: magic).

We're a little fuzzier on other details, like how light behaves when passing through a magnifying glass or what property of a sound wave determines loudness (answer: whether it is being produced by a cranky child). And the lowest percentage of correct answers was a surprise to us -- only 34 percent of people knew that water boils at a lower temperature at higher altitudes. We thought everybody knew that, but we went to high school in Flagstaff, Arizona, elevation 7,000 feet.

And like every science survey ever, the Pew survey found Americans have an annoying tendency to not know the difference between astronomy and astrology, which is that one is a science and the other a lucrative field of bullshit. In this case, though, we're mostly inclined to grumble about the survey design -- the question itself suggests that astrology is a legitimate thing: "Which of these terms is defined as the study of how the positions of stars and planets can influence human behavior?" Pfft -- OK, sure, technically, people "study" it, but it's still the study of cacadoody. (Happily, at least three quarters of Americans knew the difference; the Pew survey didn't ask whether people thought astrology was real -- the answer to that one is too depressing). We can also take comfort that 76 percent of Americans know that the tides are caused by the Moon's gravity, although the downside is that nearly a quarter of us are Bill O'Reilly.

So now that you've gotten a few hints (the correct answer is always "B"), go take the quiz, read the study results, and discuss in the comments, which we do not allow. Oh, and Yr Dok Zoom aced the quiz -- but only because Gizmodo gave us the answer to the question about "amplitude," which we otherwise would have answered "Benghazi."

Look At This Adorable Pink Dolphin. Just Look At It!

You were expecting perhaps a pony?

A rare pink bottlenose dolphin, creatively nicknamed "Pinkie," has been sighted again in Louisiana's Lake Charles; it was first spotted in the Calcasieu River in 2007.

Local charter boat captain Erik Rue said that he has taken several pictures of Pinkie mating in the area and discovered that the distinctly-colored mammal is female.

"I believe I'm first one who saw her and I know I'm the first one to take pictures of her," Rue said.

"I've learned a lot since I've spend a lot of time following her around."

Pinkie is a hit with sightseers using Mr. Rue's charter service, and reportedly is quite curious, sometimes swimming within five to ten feet of the boat. Rue also shot some video of the critter in 2011, which is worth catching if only for the cringeworthy generic music accompanying it.

A National Geographic blog post explains, rather patiently we think, that Pinkie is probably an albino, what with the red eyes and lack of skin pigmentation. Asked why she had returned to Louisiana waters now, Pinkie said in an emailed statement, "Well, I'd heard about Bobby Jindal's official portrait, and I thought we might have a lot to talk about. Man, was I disappointed. That guy's in the tank for Big Oil!" She then thanked us for all the fish and asked if we'd seen that hilarious video with Obama and the salmon.

How Cephalopods Do It

How they change the color of their skin to camouflage themselves, that is. What did you think we were talking about, you filthy pervs? Enjoy this way cool explainer from PBS's "Deep Look" on how squid and other squishy undersea critters instantly change the colors and patterns on their skin, using teensy organs called chromatophores:

Each tiny chromatophore is basically a sac filled with pigment. Minute muscles tug on the sac, spreading it wide and exposing the colored pigment to any light hitting the skin. When the muscles relax, the colored areas shrink back into tiny spots.

After viewing the video, a spokesman for the Fraternal Order of police condemned marine biologists for their politically-correct obsession with skin color, then tased an octopus.

Here's a pretty awesome little robot fable that, in less than 9 minutes, undermines any number of cheerful lessons about sharing and cooperation. We love how it takes a lot of the tropes of a Pixar-type kids' movie and thoroughly subverts them. All you need to know about the premise:

Wire Cutters is a brilliantly crafted student film directed and animated by Jack Anderson. It tells the story of two robots from rival mining companies that meet by chance in a desolate planet.

Wire Cutters is just one of about a bajillion cool short films submitted for the Sploid Short Film Festival, which has so much good stuff that, like a hungover teacher scrambling to fill up class time with anything at hand, we'll just round out today's Nerdout by showing you one more movie:

The Downside Of Time Travel

One-Minute Time Machine is another entry in the Sploid Short Film Festival. Director Devon Avery brings us an important cautionary tale about over-using Life's reset button, if Life had a reset button.

Caution: Yr Wonkette does not recommend this dating technique, anywhere in the multiverse.