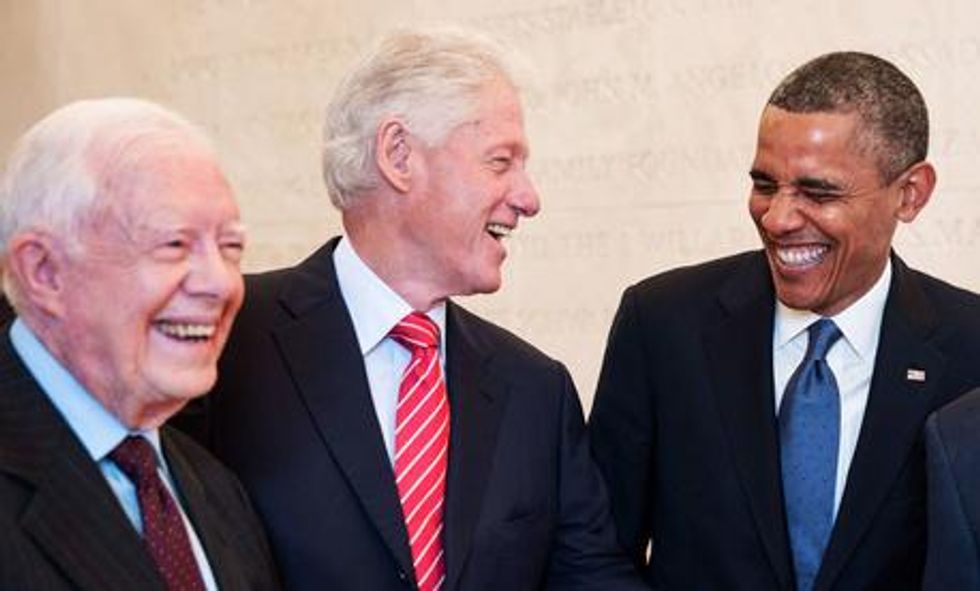 Hey, Wonkaloos, after much time and consideration, and the realization that we had to actually go back and read the damned things, we have selected a winner for your Presidents Day Caption Contest, which we figured you might suck at, and by god, you lived up to our expectations! The first prize should be two tickets to 50 Shades of Grey, but not even we are that cruel. But here is Your First Prize Winner, by Blank Ron:

Blank Ron, send an email to Rebecca at-sign wonkette dot com, and she will send you your prize, an actual Elizabeth Warrenskovna Tee Shirt in any color you want, as long as it's black. Be sure to indicate whether you want a man-person's or lady-person's tee, and specify your desired tee-shirt size, so that you do not accidentally end up wearing something that is ill-fitting!

We also present our runners-up, who win only the adulation of their fellow Wonkers, which when you think about it, is almost as good as a t-shirt except that you can't wear it because it is actually immaterial. So, in no particular order, the also-rans!

We'd also like to note that the gentleman in the middle is William Jefferson Clinton, so those of you who submitted captions identifying him as Vice President Joe Biden wrote bad captions, and you should feel bad.

Also, too, it was brought to our attention that we never selected winners of the "Jimmy Carter Wearin' an Allman Brothers Band T-Shirt" caption contest. There is a very good reason for that: We forgot. And then when we went to go look at the captions today, they had all vanished in the Comment System Switch, like tears in rain. So then we had a few beers and watched Blade Runner while Shy tried to recover the captions. And we realized something about being human: It's a lot cooler when you're Rutger Hauer.

So there is no winner for the Jimmeh Carter In An Allman Brothers T-Shirt Contest, or you all tied for second place, which has only bragging rights as the prize. Our contest judging was bad, and we feel bad!

We wish to offer our most heartfelt apologies.

Who are we kidding? They'd have sucked anyway, man.