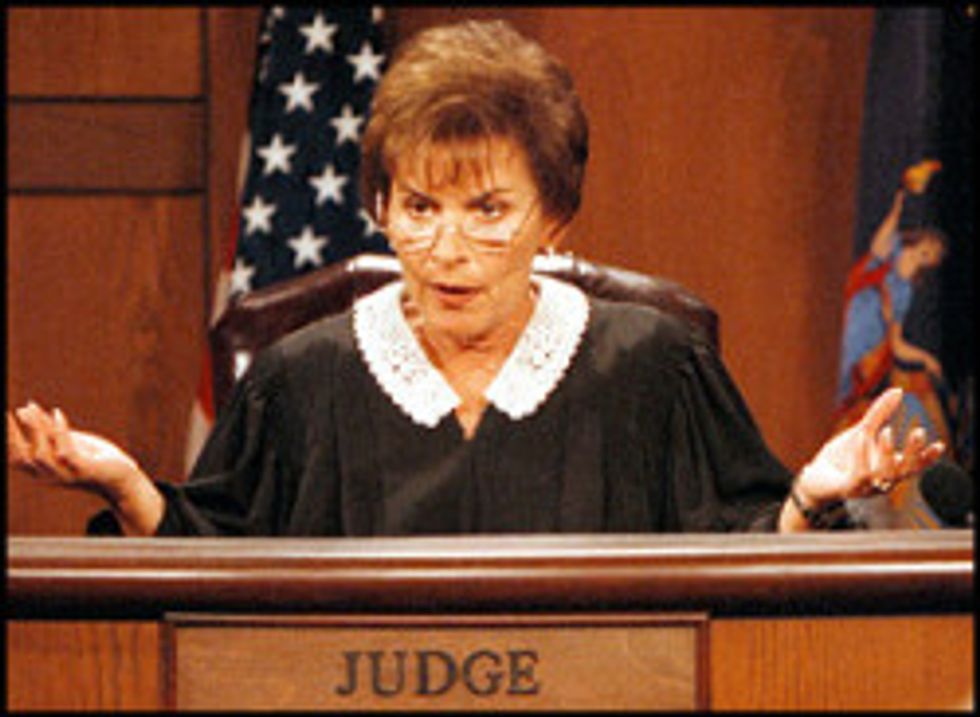 Law blog Lawblog BLAWWWG. Time for more lawzzz! What are we thinking about/talking about/still really fucking pissed about today? We are still mad about this judge dude who LITERALLY sold kids and we get to write about it now becausehis sentence just got upheld.

A jury convicted Ciavarella in February 2011 on 12 of 27 counts, including racketeering and conspiracy, for pocketing a portion of $2.8 million to send thousands of Luzerne County youths to a pair of for-profit juvenile detention centers.

Maybe you were not paying enough attention when this all went down or maybe you were, but either way it is time for a trip down memory lane with yr Wonkette because fuck this guy. For years, this living sack of scum took goddamn oodles of money to send kids to a private detention center for pretty much no reason at all:

Between 2003 and 2008, two Pennsylvania judges accepted millions of dollars in kickbacks from a private juvenile detention facility in exchange for sending children — girls and boys, some as young as 11 — to jail... the 13-year-old incarcerated for throwing a piece of steak at his mother’s boyfriend; the 15-year-old for throwing a sandal at her mother; the 11-year-old for calling the police after his mother locked him out of the house; the 14-year-old for writing a satirical Myspace profile. Another 14-year-old, an A student, was sentenced for writing “Vote for Michael Jackson” on a few stop signs; she had a seizure while in detention, banging her head so hard she cracked her dental braces.

Mark Ciavarella is the judge who sent away all those children — and several thousand others — in cahoots with Judge Michael Conahan... After the briefest of hearings — the average length was four minutes — kids were dispatched to detention centers in which the judges had a financial interest. If parents were unable to pay the costs of detention, their children were sometimes held longer. One teenager’s Social Security survivor’s check, from his father’s death, was garnished to pay the costs.

Did we say fuck this guy already? We don't care, because FUCK. THIS. GUY. He wrecked thousands -- THOUSANDS -- of kids' lives by sentencing them to hell, and then had the fucking temerity to demand NO sentence for himself because it was hard to handle all the publicity when he got caught:

The Pennsylvania Supreme Court tossed about 4,000 convictions issued by Ciavarella between 2003 and 2008, saying he violated the constitutional rights of the juveniles, including the right to legal counsel and the right to intelligently enter a plea.

Ciavarella, 61, was tried and convicted of racketeering charges earlier this year. His attorneys had asked for a "reasonable" sentence in court papers, saying, in effect, that he's already been punished enough.

"The media attention to this matter has exceeded coverage given to many and almost all capital murders, and despite protestation, he will forever be unjustly branded as the `Kids for Cash' judge," their sentencing memo said.

Somehow we imagine they were given more than four minutes to plead his case, too. Weird.

Some of yr Wonkette are lawyers but those some of us would rather eat a gun than write a sentencing memo saying that this dude shouldn't go to prison for this. 28 years is much too damn short a time for being this terrible. Indeed, though yr Wonkette, lawyer parts or no, are 100% anti-death penalty hippies, if we believed in executions, this guy would be the first against the wall, Chinese-official-caught-extorting-styley. Seriously, fuck this guy.