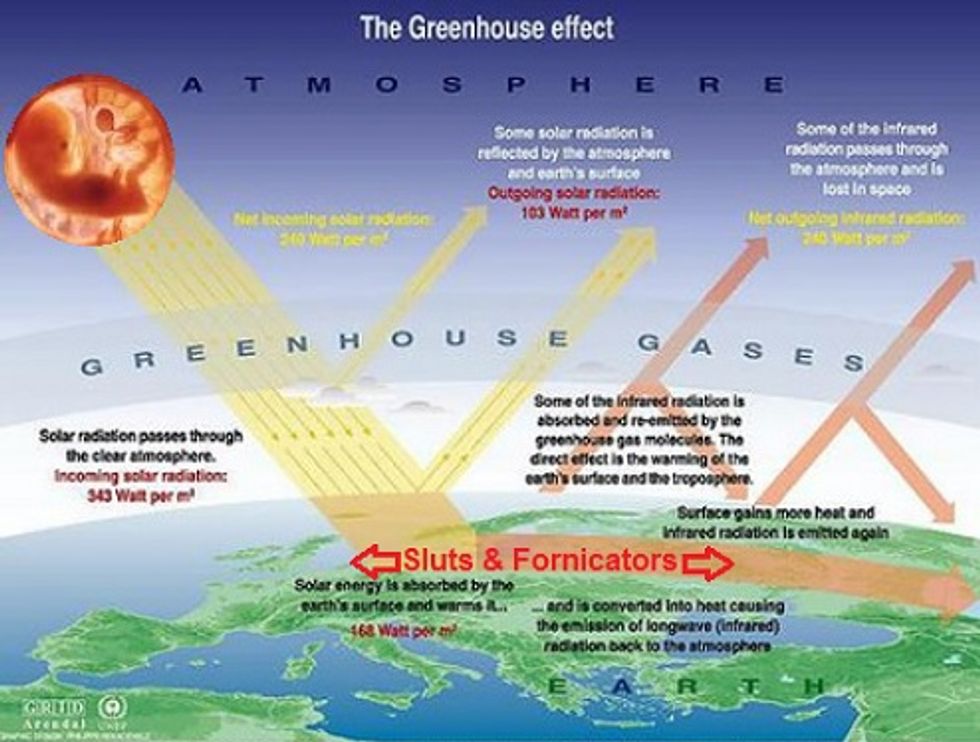 David Barton, thefake historian who likes finding true facts about guns in Louis L'Amour novels and who wrote a whole book full of lies about Thomas Jefferson, is branching out from fake history into fake atmospheric science. In a recent YouTube chat with fellow evangelical thought leader Kenneth Copeland -- who likes science so much his anti-vaccination church was the epicenter of a measles outbreak -- Barton explained that Earth's climate can only be explained in terms of God's direct intervention in the atmosphere. And it turns out that God pays very close attention to election results, so extreme weather turns out to be the direct result of how Americans vote. It remains to be seen how the Almighty will punish America for Republican losses at the top of the ticket in Virginia yesterday, or whether His Hand of Vengeance will be stayed by the re-election of Chris Christie.

Copeland sees all of America's problems as stemming from abortion, of course, by "open[ing] that door" which has led to a "curse" of floods, tornados, murderers and pedophiles.

"Abortion was a seed to it," said Copeland, "that has grown into a murderous, bloody crop of child death."

We are starting to see why this man thinks vaccinations are unnecessary, since disease vectors have less to do with microorganisms than with moral failings. It all goes back to that one time in high school when Kenneth Copeland masturbated and Texas's sugar beet crop failed.

Once "you open the door to killing," Barton added, "it's got a lot of different manifestations" because the nation immediately falls under the judgment of God as He removes his protection and "whap, here comes storms like we've never seen before and here comes floods and here comes climate stuff that we can't explain; all of the hot times and all the cold times and not enough rain and too much rain and we're flooding over here and we've got droughts over here ... And today we're saying 'oh no, it's global warming.' No, we opened a door that lost God's protection over our environment and that's our choice":

Mr. Barton's insights will no doubt be a great relief to all those climate scientists who have been wasting their time studying the atmosphere and Antarctic ice cores when they should be handing out plastic fetuses from the groovy Fetus Store. He is no doubt waiting for a call from the IPCC so that he can explain this bold new science in greater detail. Let's hope he takes enough Abstinence Skittles for everyone.