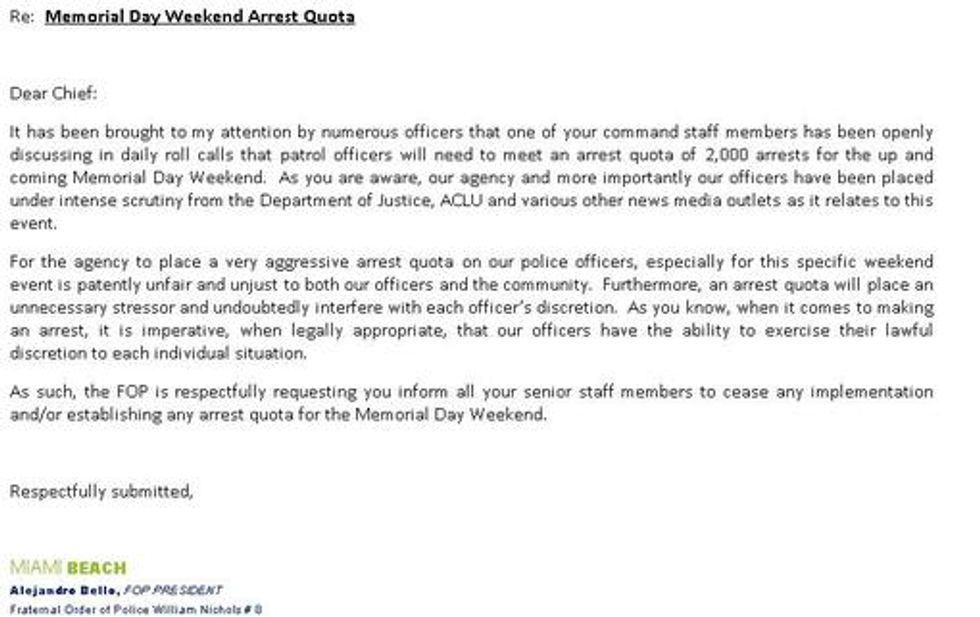 Do not fear, Miami Beach! Sure, lots and lots of African American youths are expected on your white sand shores for Memorial Day weekend, but luckily your PD is ready for them, and that is by instituting a "quota" mandating that its officers arrest a minimum of 2000 blahs! Nah nah nah says the police chief, Raymond Martinez, no quota nah! Or, more precisely, "I want to be clear, there is no arrest quota for Memorial Day weekend or any other day on Miami Beach." But other people say that he is a lying liar.

Miami-Dade Commissioner Barbara Jordan said it is a form of racial profiling and being done "deliberately to kill Urban Beach Weekend."

"The police chief can deny it all he wants, I've seen it in writing," Jordan said.

But does anyone else back up Ms. Jordan?

On Monday, union president Alejandro Bello wrote to chief Martinez, claiming that "numerous officers" reported a supervisor announcing the quota. Bello called the quota "patently unfair and unjust to both our officers and the community."

Oh. But he sounds 'Spanic! But so does the police chief! HOW ARE PEOPLE SUPPOSED TO KNOW WHO TO BELIEVE? Miami New Times has some letters, from dudes to the chief. It's super weird and cognitively dissonant, but the police union down there seems to want to protect both its members and the black community. Huh?

What a weird police department. [MiamiNewTimes/Local10]