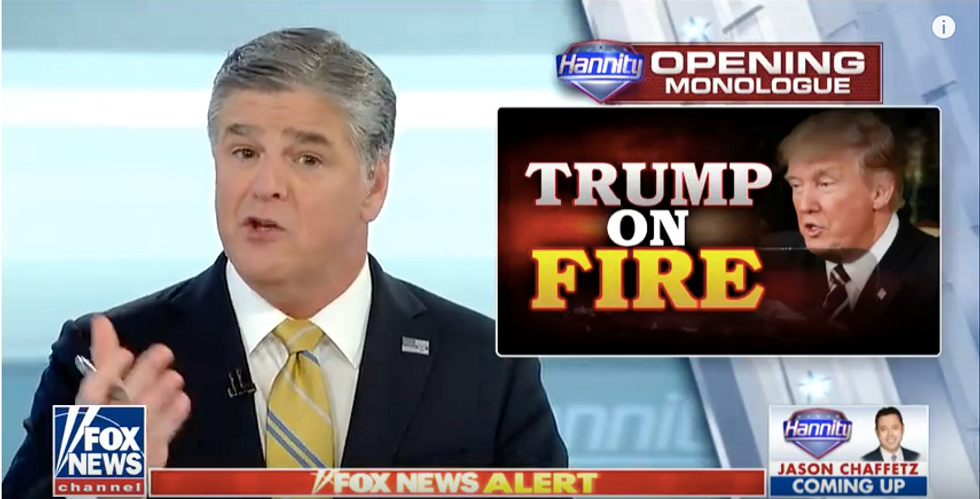 This is not literally true, we must report.

I'm not a white person of a certain age terrified that my place in the world is diminishing thanks to an advancing modernity I don't fully comprehend, but if I were, I'd find FOX News a wonderful resource. The sad sack liberal or average person of color scans the news in horror each morning to discover mounting evidence that the current president is a mentally unbalanced recreational liar who acts like a wiseguy from Goodfellas. But if we were just open-minded enough to visit our friendly neighborhood Sean Hannity, the Mr. Rogers for petty racist children of all ages, we'd feel a lot better:

.@seanhannity: "President @realDonaldTrump and his legal team— they do have the power to literally order @TheJusticeDept to actually initiate an investigation, end an investigation, and by the way, for any reason. That is within the president's constitutional authority." #Hannitypic.twitter.com/xtR8y62W5C

See how passionately Hannity explained that the president of the United States can do pretty much whatever he wants? He even invited over "attorney after attorney" -- who probably risked disbarment just by appearing on his show, if this was a just world -- to beat you idiots over the head with the not-so-complicated legal principle that the president is above the law.

This is what your suburban grandparents are watching. It's like every evening, they're figuratively strapped down while Sean's blustery spittle pours over them while they just relax:

Hannity is also kind enough to spend hours each week detailing how all this crime and corruption we're hearing about actuallywas done byBarack Obama, so why should people be worried about Trump? We should all focus on supporting Trump, who is the victim of the Zombie Obama administration's beyond the grave attacks. Former New York Mayor and current sitcom lawyer Rudy Giuliani agrees with Hannity that the humble, unassuming Trump has absolute power, which I guess was locked away in the White House attic because we couldn't trust any former president to use it until the host of "Celebrity Apprentice" came along.

Giuliani, who used to believe selling loose cigarettes was a capital offense, has apparently mellowed since then and now suggests Trump could just shoot fools in the Oval Office or drop them into fire pits.

Although Giuliani concedes Trump could be impeached for such Bond-villain shenanigans, there's the Crook-22 that as long as he's still president, he can just pardon himself so what would Congress have to sweat about? Legal scholar Donald Trump even cited "numerous" unnamed "legal scholars" to assert that he is constitutionally empowered to do this very unconstitutional thing:

As has been stated by numerous legal scholars, I have the absolute right to PARDON myself, but why would I do that when I have done nothing wrong? In the meantime, the never ending Witch Hunt, led by 13 very Angry and Conflicted Democrats (& others) continues into the mid-terms!

Poor Trump thinks the Constitution is practically begging for him to commit crimes so he can PARDON himself. Nope.

Weasel in the shape of a weasel Ted Cruz was asked if Trump could self-pardon (I imagine it's sort of like trying to scratch your lower back), and in response he transformed into a less appealing Lucille Bluth and said, "I don't understand the question, and I won't respond to it":

At this point, none of the investigations has demonstrated any criminal conduct needing to be pardoned, as much as those who hate the president might wish otherwise.

It's not even worth a second of self-proclaimed Constitutionalist Ted Cruz's weaselly time to look into the matter because it's not like Trump is in any immediate legal jeopardy. Besides, even if he were, we can all trust Trump to behave honestly, according to this well-respected (at least by Ted Cruz) character witness:

But that was back in the bad old days when Obama was president and everyone was afraid he'd impose Sharia Law or tyranny through cell phone. We can afford to put our feet up with Trump in office. Right, Sean? Yeah, everything's just great.

Don't just trust that the institutions you love, like Wonkette and America, are just going to survive! Click here to protect Wonkette by making a donation!