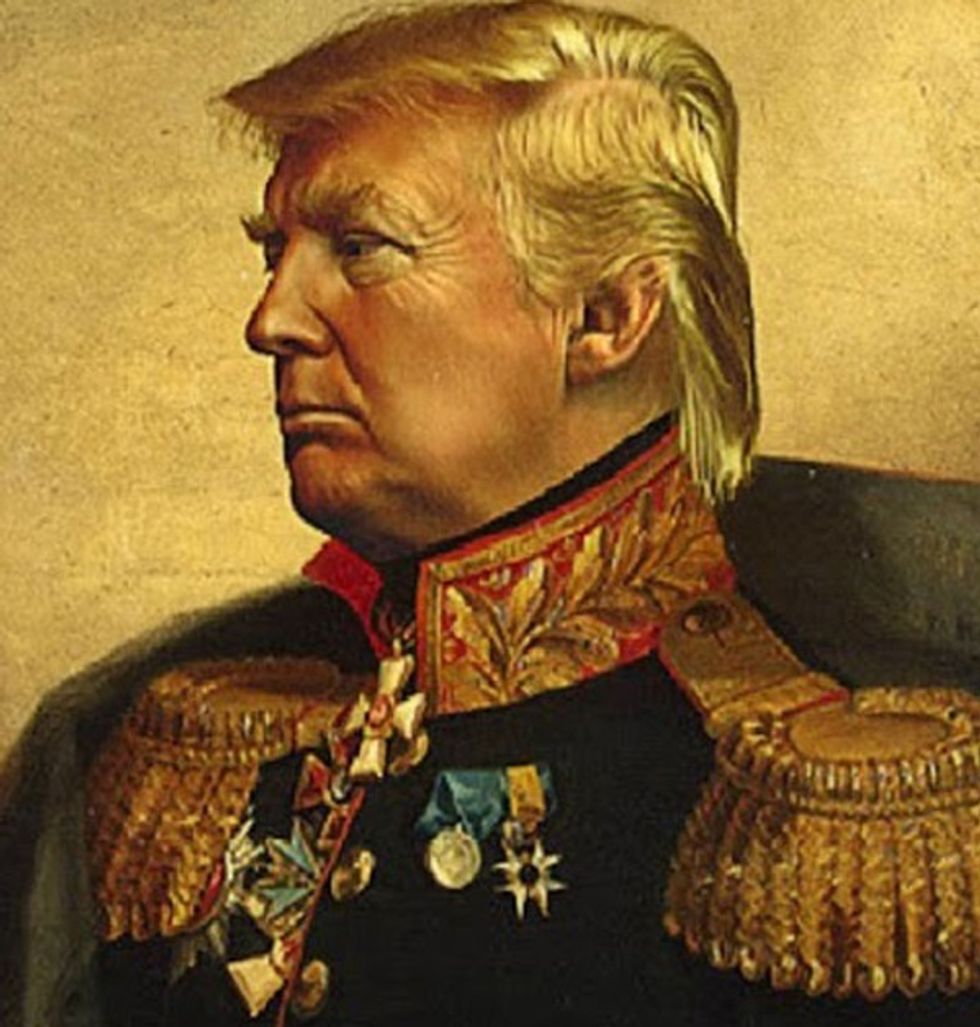 Get ready for him to pose with a missile battery, possibly while making 'WHOOSH!' noises.

The U.S. Navy launched 59 Tomahawk cruise missiles against a Syrian air force base Thursday night, in retaliation for a chemical weapons attack Tuesday that killed over 80 civilians. Donald Trump was moved to launch the attack, the first airstrikes targeted directly against Syrian government forces, because he was upset by seeing dead Syrian children on TV, including, as he put it, "beautiful little babies." Not that he's going to relax his ban on allowing more beautiful Syrian children to enter the U.S. as refugees, because they might be terrorists. Flinging $30 million in thousand pound warheads at an airbase ought to be sufficient to relieve the suffering of those beautiful babies.

“Tonight, I ordered a targeted military strike on the air base in Syria from where the chemical attack was launched,” Mr. Trump said in remarks at his Mar-a-Lago estate in Florida. “It is in this vital national security interest of the United States to prevent and deter the spread and use of deadly chemical weapons.”

Trump said the decision to use force against the government of Syrian president Bashar al-Assad was intended to make Assad change his tactics in the Syrian civil war:

Years of previous attempts at changing Assad’s behavior have all failed, and failed very dramatically. As a result, the refugee crisis continues to deepen, and the region continues to destabilize, threatening the United States and its allies.

Trump also called on "all civilized nations" to join the USA in bringing an end to "the slaughter and bloodshed in Syria." In what seems like a departure from his prepared text, he added "Also, to end terrorism of all kinds and all types." Both of those.

The consensus among military talking heads on TV, however, was that the attack on the Al Shayrat airfield -- thought to be the launching point for Tuesday's attack -- was enough to allow Trump to say he's acted decisively, and while it may have taken out enough Syrian aircraft to reduce some parts of Assad's assaults on rebel areas, it's not likely to significantly change Assad's conduct in the civil war, much less drive him from power.

The attack does at least seem to have been designed to avoid killing Russian personnel at the airfield, according to Pentagon spokesperson Capt. Jeff Davis, who said Russia had been notified in advance of the U.S. missile attack:

“Military planners took precautions to minimize risk to Russian or Syrian personnel located at the airfield,” he said. No Russian aircraft were at the base, military officials said.

“We are assessing the results of the strike,” Captain Davis added. “Initial indications are that this strike has severely damaged or destroyed Syrian aircraft and support infrastructure and equipment at Shayrat airfield, reducing the Syrian government’s ability to deliver chemical weapons.”

Trump's national security adviser, H.R. McMaster, also said the missiles were targeted to avoid hitting a facility believed to be storing sarin nerve agent at the airbase, to avoid a release of gas that could harm nearby civilians.

Despite U.S. insistence it tried to avoid Russian casualties, the Russians are pissed that America would attack its Syrian ally, which of course it's required to be. The Washington Post reports that Vladimir Putin's spokesperson, Dmitry Peskov, called the missile strikes in Syria "violations of the norms of international law, and under a far-fetched pretext." Further, Russia has said it would no longer participate in an agreement with the U.S. to share information about airstrikes against ISIS in Syria, where both U.S. and Russian aircraft have been bombing Islamic State targets -- although in Russia's case, those "ISIS targets" sometimes turn out to be hospitals. We can't imagine there will be any ill effects from that "de-escalation hotline" going silent.

Not surprisingly, two of America's most dangerous conventional warheads, Senators John McCain and Lindsey Graham, issued a statement praising the airfield strike, saying it “sent an important message the United States will no longer stand idly by as Assad, aided and abetted by Putin’s Russia, slaughters innocent Syrians with chemical weapons and barrel bombs.” Not that they thought one airstrike on a military target was sufficient; they want a much broader effort to take out the Syrian air force and pursue a "new, comprehensive strategy in coordination with our allies and partners to end the conflict in Syria," which is hawk code for a lot more death from the sky, plus maybe boots on the ground if we need to, but only if absolutely necessary, which it will be, probably, depending on whether Syrian forces attack American troops serving as advisors to anti-ISIS militias in Syria.

By the end of the week, Trump will be saying he always wanted a tougher policy toward Syria.

In any case, Trump strong like bull, missiles good, no U.S. casualties this time because that's what cruise missiles are all about, and now we can look forward to a couple of possibilities: Maybe now that he's taken "decisive action" (unlike weak Barack Obama, who merely asked Congress to authorize military action), Trump will declare victory and go back to tweeting tough talk. If this single airstrike is all that happens, we're pretty fine with that -- the whole "proportional response" military thing.

Or military chaos may escalate, because that's what tends to happen when missiles start flying in the Middle East. Then we can look forward to being told that in wartime, it would be unpatriotic, and possibly treasonous, to insist on investigating any contacts the Trump campaign may have had with Russia before the election. Besides, if Team Trump were somehow in the pocket of the Russians, why would he attack their ally in Syria? Let's all come together and stop all this partisan divisiveness, shall we?

Yr Wonkette is supported by reader donations. Be a dear and click the "Donate" linky below, won't you? We need to upgrade our body armor.