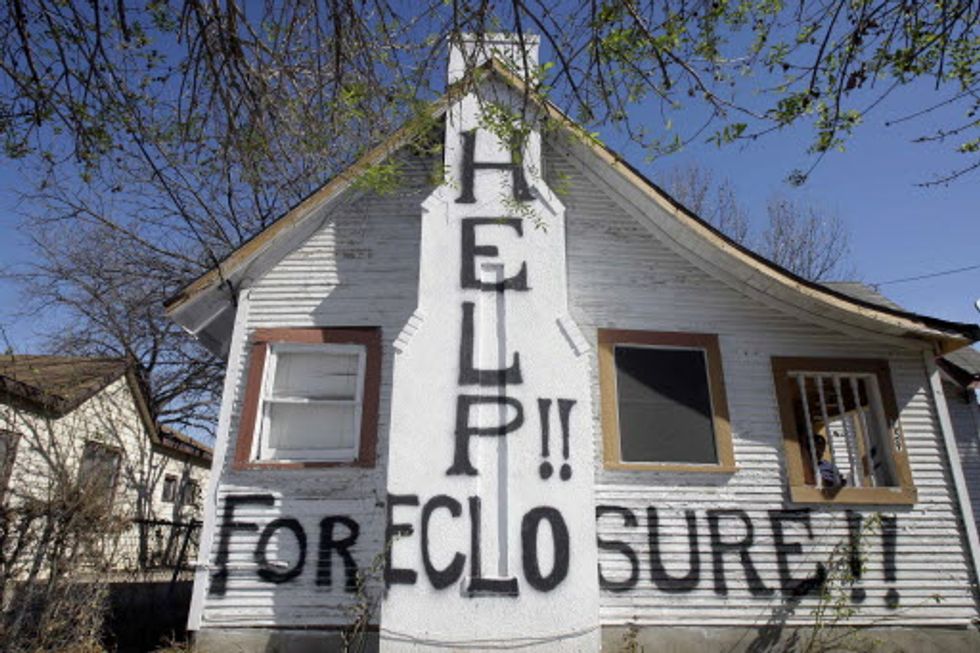 Hello, would you like to hear a heartwarming story about banks? Oh good, because last week, a bank accidentally foreclosed on the wrong house and a nice middle aged couple lost everything that wasn't nailed down and can never get it back, ever again. Sorry, precious memories, about going to the wrong address and all. Hindsight is 20/20, etc!

The owners of a modest home near Twentynine Palms lost their cherished possessions after a bank mistakenly foreclosed their residence. A crew broke into Alvin and Pat Tjosaas’ desert home and took everything after being directed by Wells Fargo to secure the structure.

Surely there is an explanation for this! Did the couple somehow miss the notice of default when it came in the mail? Were they out of town when the bank tried repeatedly to warn them that they had missed too many payments?  Ha! Ha! Ha! Nope, none of that happened--the couple didn't have a mortgage because the husband helped his father built the house back in 1961.

Alvin said the deputy sheriff said, “Good news, we know who took (your possessions)…Wells Fargo. Bad news, your stuff is all gone.” ...A spokesman for Wells Fargo released a statement apologizing to the couple.

“We are deeply sorry for the very personal losses the Tjosaas family suffered as a result of their home being mistakenly secured,” said Alfredo Padilla. “We are moving quickly to reach out to the family to resolve this unfortunate situation in an attempt to right this wrong.”

Yes, they are so deeply sorry that they broke into the wrong house and emptied it of all its stuff and then somehow lost it. But this nice couple should look on the bright side, because when Wells Fargo has mistakenly foreclosed on other people, lost or destroyed items include the family cat, and in this case, no animals were killed; just family heirlooms and precious memories.