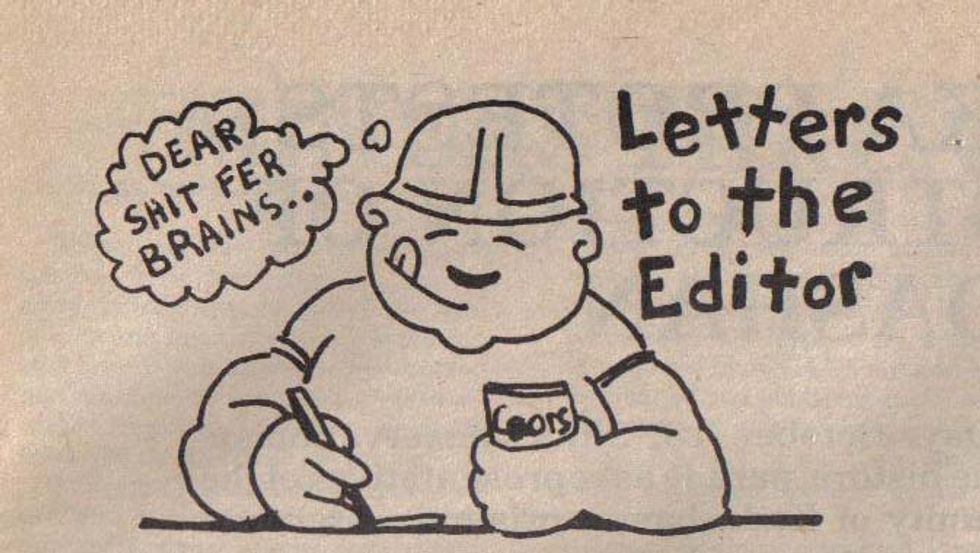 A West Virginia newspaper is taking flak for running a reader's anonymous voicemail rant in its letters column, simply because the reader suggested some views that were a little bit outside the mainstream. In response to an article about the maybe-trumped-up firing of a lesbian teacher, a reader left a message on the Lincoln Journal's voicemail praising the school board for its wisdom and suggesting some other improvements for the world. The message, as printed in the paper's "Gripes and Gratitudes" column, read:

We were really glad to hear that School Board is getting rid of them queers. The next thing is we need to get rid of all the n****rs, the spics, the kikes and the wops. You know even them Catholics, they are wrong as baby eaters. We need to clear them people out and have good, white, God fearing Christians and everybody else needs to be put to death for their abominations. We'll keep Lincoln County white and right. Thank you.

It was awfully thoughtful of the caller to use asterisks like that, we think. A Charleston TV station reports that many readers were upset by the remarks, which just goes to show that some people in West Virginia don't appreciate the value of having a rich public dialogue that values all points of view.

The story was further botched by RawStory, which ran with a headline ("West Virginia paper’s anti-LGBT column wants death for ‘n*ggers, spics, kikes and wops’") suggesting that a columnist at the Lincoln Journal was responsible for the comments. RawStory also transformed a source interviewed for the TV story from "Janet Dooley, interim dean at Marshall University's School of Journalism" (who considered the comment unacceptable because it was anonymous hate speech) to "Marshall University’s School of Journalism intern Janet Dooley." We know the academic job market is kind of crazy these days, but there's a shade of difference between an "interim dean" and an "intern," guys. Raw story, half-baked story, whatevs.

The ruckus over the comments -- EEEK! Don't publish anything upsetting! -- somewhat overshadowed what appears to be the completely bugfuck insanity of the story that prompted them, which was about the firing of teacher Kelli Burns by the Lincoln County Board of Education. Burns, a middle school teacher, believes she was fired in part because students had been coerced to submit false testimony that she had "tried to turn them gay." A follow-up story adds that she was accused of having "shown naked pictures of herself to students using an iPad," a claim that she also denies. Per policy, the school district did not discuss the closed-door hearings or reveal its specific grounds for dismissing Burns; she plans to appeal her firing, so eventually we will maybe have a better idea of what exactly came up in the hearings? You'd sort of think that if there were really any evidence that a public school teacher was showing naked selfies to middle schoolers, she'd face more than getting railroaded out of her job? Sounds like a friendly town.

In any case, Yr Wonkette would like to make it clear that we would have published the fuck out of a voicemail like that, although maybe not in the regular letters column (which in our case we have not got because Wonket does not allow comments). Because really, "wops?"