What a Drag It Is Getting Old 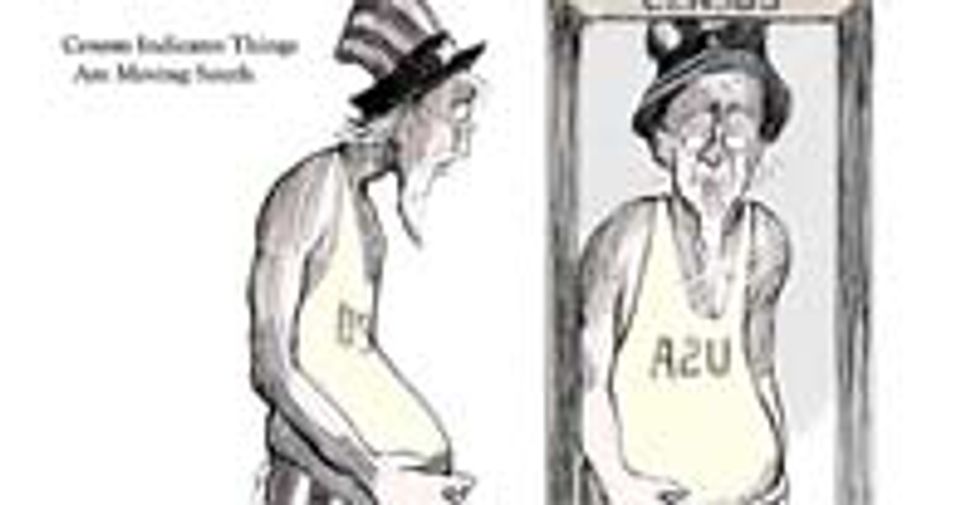 By the Comics Curmudgeon
Remember when we elected a young, handsome president? This was a whole 23 months ago, so obviously the sweet blush of youth is long gone from the man's face, replaced by a sort of tired, ashy pallor. The presidency is a killer -- never doubt this! But in a way, Barack Obama's premature aging is a metaphor for America, which is also getting old and worn-out. And if there's one medium that's good at expressing these sorts of metaphors of aging, it's cartooning. (Political cartoonists are all old, because all young cartoonists are drawing tentacle rape hentai on the Internet.)

So what's a guy to do when he's no longer young and hopeful, but now aging and sad? Well, here in USA America, Mr. President, we go out and buy some impractical petroleum-consumption device. The louder the better! The noise its engine makes represents your penis, you see. But as this cartoon demonstrates, our socialist president can't even get this right. He appears to have acquired some kind of "hybrid vehicle" -- not the kind that uses gasoline and electricity, but the kind that combines mechanical parts and organic matter to create an unholy machine-mollusk union. Your attempt to arouse this lady donkey-furry will backfire when you rev the motor, only to leave a trail of viscous slime behind you!

The truth is, we're all getting a bit older! And saggier, with "saggy" being a euphemism for "fat." Like Uncle Sam here. Ha ha, look at that gut! But I think all of us -- including our chubby Uncle -- are in for a surprise. That's no mere beer gut; Uncle Sam is pregnant! The movies tell us that a baby is the best way to feel young again, but of course the movies are liars. Babies are exhausting! And expensive! Do you know how much a baby country costs to raise? And Guam hasn't even left for college yet, just sittin' there on the couch all the time. No wonder Uncle Sam looks so darn depressed.

People react to getting old in weird ways! Sometimes they come up with odd hobbies to while away the time and keep their mind off their own advancing decrepitude. John Boehner, for instance, probably ought to be spending his time working on what he's going to do as President, once the Republican-controlled Congress impeaches Obama and Biden and removes them from office next February. But instead, he's just frittering away energy by assembling the biggest gang of Irish dwarf thugs he can find and outfitting them with the most adorable bowler hats and shillelaghs. It's a sickness, John! It's just as bad as self-tanning! Get help!

The really sad thing about getting older is that we can't even shake off the silly rumors people spread about us when we were young. Like that whole "President Obama is a Muslim" thing. Not that this cartoon, which features the president prostrating himself in a manner similar to a Muslim at prayer, means to imply that at all. No, no, don't be silly! It means to imply that the president wants someone -- possibly a bevy of hot Iranian dudes, possibly his own enormous marbleized avatar -- to do him up the butt.

Hey, you know how sometimes people refer to rich and powerful dudes as "fat cats," if they're trying to generate negative feelings and resentment against said rich and powerful dudes? Well, get this: what if we drew one of these metaphorical fat cats -- oh, you're going to love it -- as an actual obese feline? We'll have him walking around on two legs and wearing a suit, just like a rich person would. Except he'll be a cat! A fat one. No, there's no need to make any kind of larger point. This "fat cat" business is comedy gold!

Oh, political cartoonist, you made your Meg Whitman drawing entirely out of dollar signs, yet I see the word "SIGNS" in your caption, which could have clearly been rendered as "$IGN$" and yet was not. This not showing the strength of your convictions! WEAK.