What Are Your Modern Job-Creating Economic Libertarian Supermen Driving Today? 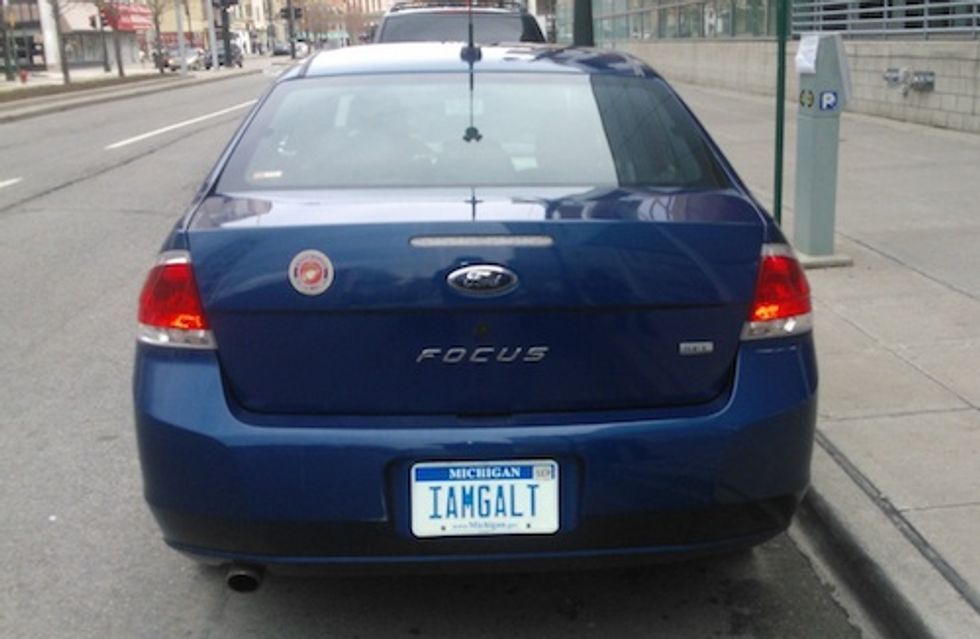 This 2008-2011 model Ford Focus SES spotted in downtown Detroit probably doesn't belong to the real John Galt, the one with a verified Twitter account or whatever. The real John Galt's car would have that magic static electricity motor. Instead, this one just uses gasoline. It must belong to one of the many other masters of the universe that hold the world up for you pathetic moochers.

You can totally see why. The 2008-11 Ford Focus SES is a pretty sweet middle-range ride at an economy price. Nothing says I'm smarter, better, and a more valuable member of society than you like a Ford compact equipped with "a leather-wrapped tilt steering wheel, an auto-dimming rearview mirror, a performance instrument cluster, metallic trim around the instrument panel, and ambient lighting with a choice of seven interior colors, which illuminate the front and rear footwells, as well as the console cupholders."

There's no shame in an elite producer rolling around town in this now-obsolete compact. The 2010 Ford Focus SES sold new for like $18,000 and has a resale value of just under $14,000. Even though Ford completely redesigned the Focus for the 2012 model year, turning the pedestrian econo-box into an elite global vehicle, the older Focus is still a good car. Vanity plate or no, people see you in a Ford Focus and they know you aren't some Wesley Mouch loser.

Sure, you'd think the average "maker" could afford something a little nicer for daily use, like a Ferrari with an impractical design that symbolizes man's heroic triumph over inadequate headroom and the lack of sufficient trunk space. However, all those needlessly burdensome government regulations have made it damn near impossible for Ragnar Danneskjöld to steal from relief ships. And how do you expect these people to afford the luxuries to which they are so entitled on just their ever-expanding income minus historically low taxes that pay for, you know, roads to drive on? The Nietzschean supermen and women of capitalism will just have to make do with a second generation Ford Focus. Thanks a lot, NOBAMA!