What Even Is This? Fabio (Yes, That Fabio) Goes On NRATV To Tell Weird Lies About Guns 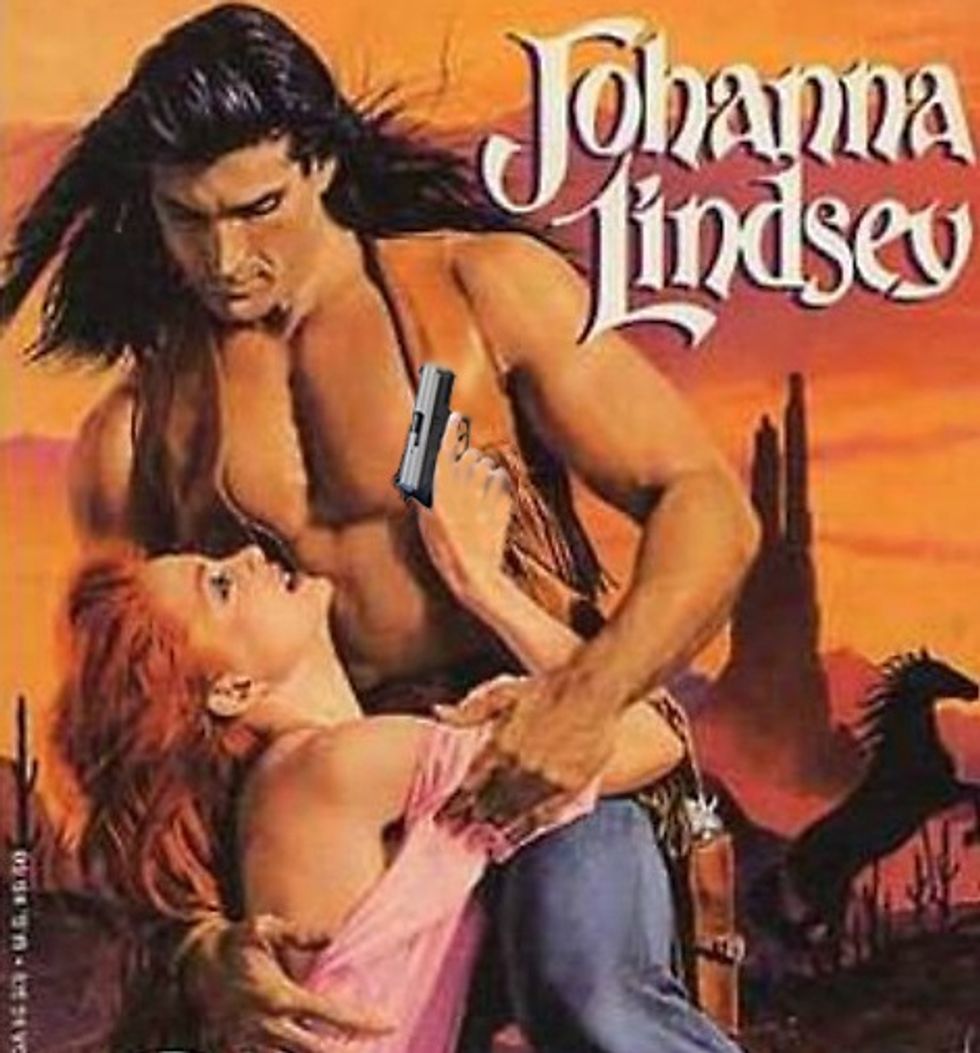 In a recent broadcast of NRATV's "Stinchfield" show, erstwhile romance novel cover hunk Fabio stopped by to tell all of California to start hoarding guns on account how “there’s going to be a lot of raping going on” because of Governor Jerry Brown signing Proposition 57 into law and "releasing all the rapists."

Weirdly, this is not a fever dream you are having, it is a real thing that happened because apparently soliciting Fabio's opinion on things is a normal thing to do now:

GRANT STINCHFIELD (HOST): Fabio, you talk about politicians. You are in California, not only are they waging war on gun ownership, but you’ve got this Prop 57 which is letting criminals out of jail and prison early just to save some money. This has become a disaster, we here at NRATV are big on law and order. You had someone break into your house, I don’t know if that was the catalyst to gun ownership or not --

FABIO LANZONI: Let me tell you, let me tell you, everybody -- it's an epidemic. Number one, you have a governor like Jerry Brown, who turned his back to the law enforcement. This is their boss. Our police are demoralized because when your boss is going to take the other side – this is a very I said, non-political, you know, issue. You have the police on one side, the law enforcement and then you have the criminal on the other side. Of course we have to stand with the law enforcement, but you know the governor of California took the side of the criminal. With Prop 57, he brought down all the violent criminals to non-violent because they were good in jail. And now he’s releasing tens of thousands. Now, yes, everybody is getting burglarized, mugged, robbed in the streets. It's an epidemic.

STINCHFIELD: Including yourself, Fabio. Your house was broken into.

LANZONI: Just in my street in they did 25 homes just to give you an idea. Because now I’m getting a police report every week. Just in my area, in the month of March, 325 homes. Just in this small neighborhood of Los Angeles. It’s an epidemic, it’s everywhere. On top of that, the police have a very hard time now even to stop this criminal. And you know now the new wave of criminals he’s going to release is going to be pedophiles, child molester and rapists. He is releasing all the rapists. So next thing you know, there’s going to be a lot of raping going on. What’s the governor of California going to say to the parents and every single woman out there should be up in arms. And on top of that, its almost impossible especially in Los Angeles, to get a gun. They almost make it impossible for regular people to get gun, when criminal can get any gun they want, including automatic weapons.

Though I'm still not thoroughly convinced that this entire interaction happened in real life, rather than being part of a fever dream I am having as a result of having taken some muscle relaxants and fallen asleep during a margarine commercial, I'm gonna take some time to address all this bullshit.

Shocking as this may be, Fabio is not at all right about any of this. First of all, what Proposition 57 primarily does is grant the state parole board the ability to parole non-violent criminals who have served the whole sentence for their primary crime -- rather than that sentence plus additional time for it's having been a repeat offense. It also allows judges -- not just prosecutors -- to decide whether or not a juvenile under the age of 14 should be tried as an adult.

It does allow the parole board to develop uniform parole credits like rehabilitation, good behavior and education for all prisoners with the exception of death row inmates and those serving life sentences for non-violent crimes -- which they were already able to do in the first place. All this does is allow them to reduce the sentence by 20% rather than 15%.

Oh! And uh, the changes to the credit system had not yet been implemented and developed back in March when this crime-wave hit Fabio's neighborhood, so that is a thing that happened independently of the new law.

Then again, Fabio also promised that we would not be able to believe it's not butter, when that is indeed a very easy thing to believe.

Grant Stinchfield is also pretty wrong about stuff -- because the new law isn't about saving money. It's about the overcrowding of prisons. It's about the fact that many people feel that it's better to rehabilitate non-violent offenders rather than just let them rot in prison, probably getting worse. Measures like this are far more likely to reduce crime than increase it. Jerry Brown is not just letting all the people out of prison willy-nilly, he's trying to figure out a way to get people out of prison who don't need to be in prison. Which is a good thing!

As far as the guns go? Well, clearly they didn't stop Fabio's house from getting robbed, and they sure as hell do not make women safer from rape, or any other form of crime. In fact, studies show that women who own guns are 50% more likely to be killed by an intimate partner than women who do not. Carrying a gun is also more likely to get you shot and killed, just in general.

Stranger rape, which is likely what Fabio is referring to, is also the most rare form of rape to begin with. Most rapes occur in situations where, even if one has a gun, it's unlikely that it will be easy to access.

Additionally, as pretty much any self-defense class will teach you, having a weapon, such as a gun -- or even pepper spray, because wind -- on you can make you even more vulnerable, as that weapon could be taken away from you and used on you. It's a bad idea. Even if you really like guns and think they are swell, introducing a weapon in that kind of scenario is only going to escalate the situation and make it much worse.

So no, California Girls, you should probably not run out and buy all the guns. Fabio, though surely an expert in the consensual ripping of bodices, is clearly not an expert on self-defense from rape or on figuring out what new laws do.