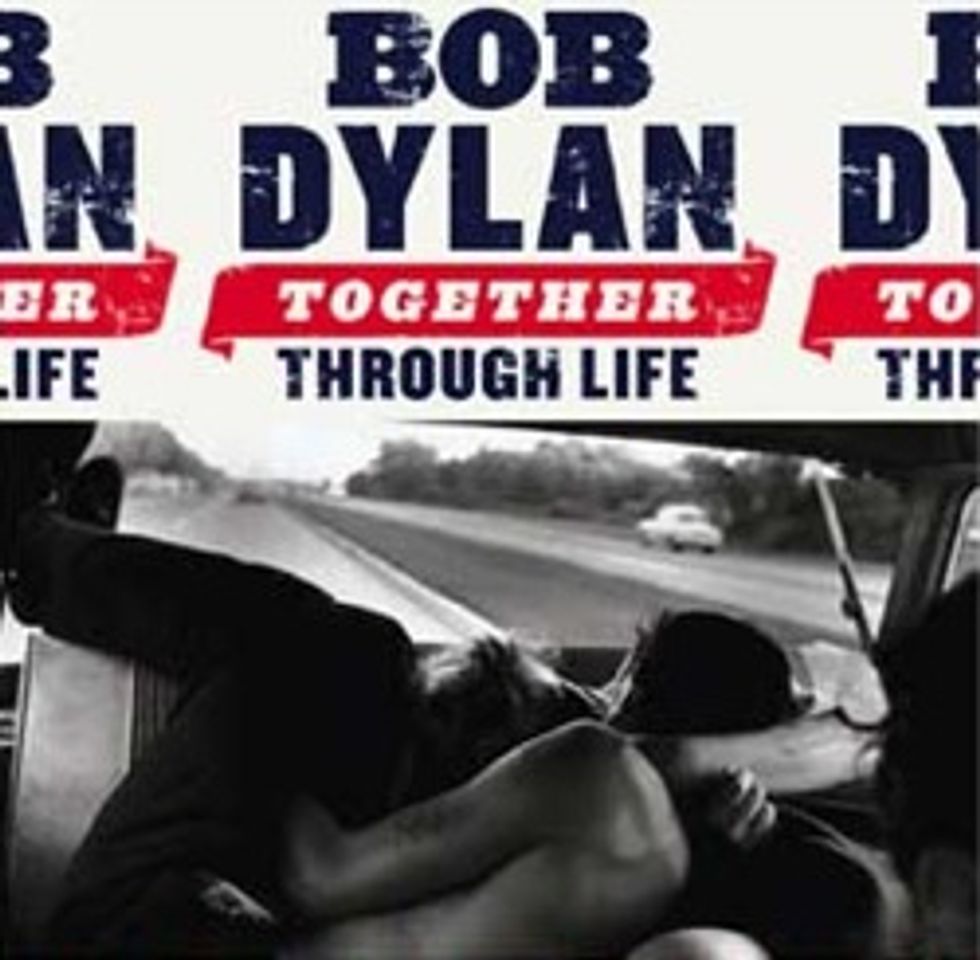 Bob Dylan's got a new record coming out next month, and you should be terrified. Yes, the dude continues to make great music, but his past two studio albums were also Harbingers of Doom.Love and Theft was about America in flames, and then under water, and it was recorded in 2001 and released on September 11 of that rotten year. His next record, Modern Times, was released in the autumn of 2006 -- it was named after a Depression-era Charlie Chaplin movie, as the stock market hit new heights and the housing bubble was just beginning to pop, and it was filled with grim songs of working people losing ground.

So what's this one about? Alex Ross from the New Yorker has heard an advance copy of Together Through Life, and he says this:

The version I heard ended with the double whammy of "I Feel a Change Coming On" and "It's All Good" — a pair that may cause listeners to detect a political undertow in this seemingly intimate, out-of-time affair. The chorus of the gorgeously lilting, almost Motown-like "I Feel a Change" could be heard as Obamaesque, although with a certain ambiguous regretfulness Dylan adds, "And the fourth part of the day is already gone." (That's apparently a reference to the Book of Nehemiah.) A Dylan album can't end on such a half-hopeful note, of course. On the grimly boogeying "It's All Good," the singer dons a mask of lethal irony, surveying a ransacked social landscape and then adding, after each exhibition of desperation and decay, "It's all good." That smug little phrase has now been destroyed. Dylan's protestations in the latest interview notwithstanding, some people may indeed come away thinking that the human race is doomed, although at least we go out with a crooked smile.

UPDATE: Commenter ComradePaulson asks below, "When has Bob Dylan NOT been a harbinger of doom?" Let's ask what's-his-name, Wiki Joe Slim:

On September 22, Dylan appeared for the first time at Carnegie Hall, part of an all-star hootenanny. This show was his first public performance of "A Hard Rain's A-Gonna Fall"[1], a complex and powerful song built upon the question and answer refrain pattern of the traditional British ballad "Lord Randall", published by Francis Child.

One month later, on October 22, U.S. President John F. Kennedy appeared on national television to announce the discovery of Soviet missiles on the island of Cuba, initiating the Cuban Missile Crisis.