WHAT WAS METRO THINKING? 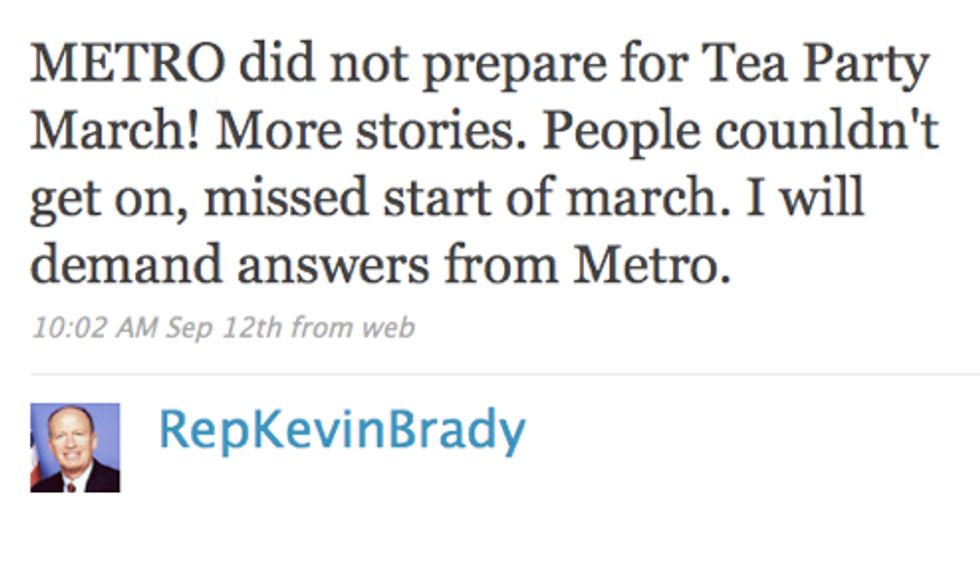 Rep.Kevin Brady of fuckin' Texas wants -- in the words of the Wall Street Journal here, okay? -- "an explanation of why the government-run subway system didn’t, in his view, adequately prepare for this past weekend’s rally to protest government spending and government services. Seriously." +1.

The Texas Republican on Wednesday released a letter he sent to Washington’s Metro system complaining that the taxpayer-funded subway system was unable to properly transport protesters to the rally to protest government spending and expansion.

“These individuals came all the way from Southeast Texas to protest the excessive spending and growing government intrusion by the 111th Congress and the new Obama administration,” Brady wrote. “These participants, whose tax dollars were used to create and maintain this public transit system, were frustrated and disappointed that our nation’s capital did not make a great effort to simply provide a basic level of transit for them.”

Nice exercise in constituent services, Rep. Kevin Brady of Texas! Was anyone able to read beyond this part, "These individuals came all the way from Southeast Texas...," what with the ensuing laughter and all?

ALSO, if this Kevin Brady paid any attention to local budgetary issues in his adopted residence of Washington D.C., he would know that Metro is broke, and broken, and getting very violent. But...

Back in July HR3288, a Transportation and HUD appropriations bill, came up for a vote. It included $150 million for emergency maintenance funding for the DC Metro.

Brady voted against it.