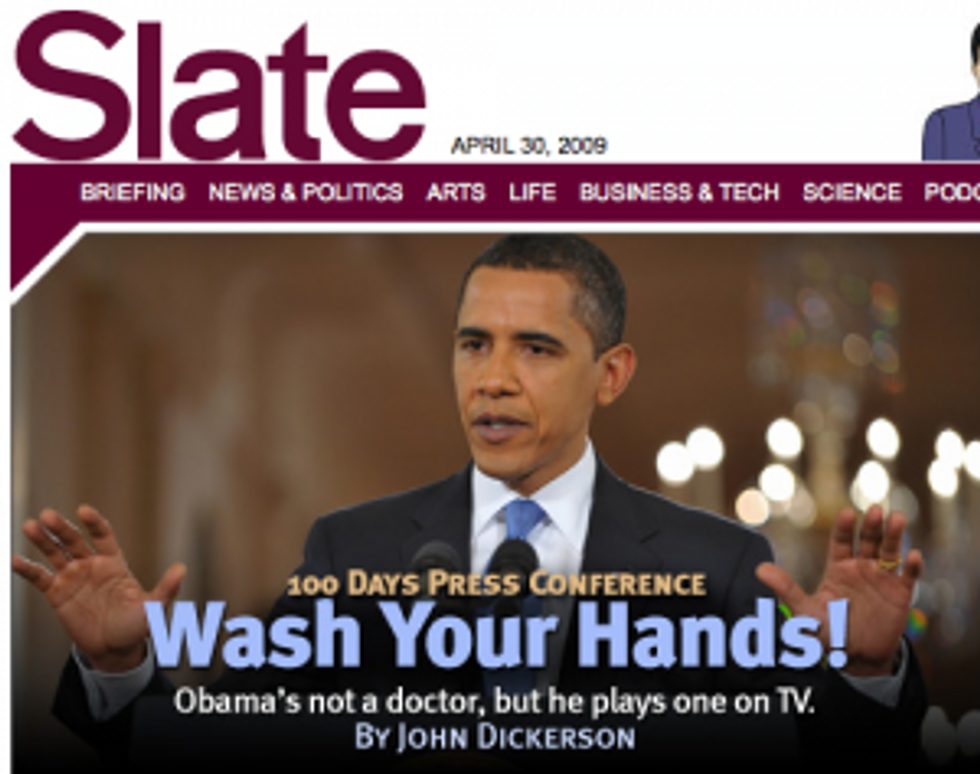 "Wash hands before leaving office.": Here is the famous Slate take on a recent event, specifically Obama's weird turn towards cold shilling for handsoap companies because what the hell—Obama is a doctor now? Do they even teach non-social sciences at UChicago—Honolulu? John Dickerson sympathizes with Jake Tapper by noting that Obama didn't answer Tapper's question about torture, despite Tapper obnoxiously repeating it. Dickerson gives Obama extra credit for knowing his Churchill, and using something the guy said about the London Air Strike to slyly condemn Dick Cheney for personally torturing Sean Hannity. Good for you, Obama. Dickerson was most impressed, however, with Obama's artful shout-out to the Troops, by whom, you'll recall, he was forced to admit to being enchanted. [Wash hands before leaving office.]

"Obama's Florida Problem.": 'Nother one from John Dickerson, this time about how how the entire state of Florida, especially the Democrats, absolutely despises Charlie Crist and all their very legitimate reasons for doing so. Uh, but wait just a leathery homosexual second there. Isn't Obama in charge of Florida's Democrats? The very same Floridian Democrats OKing mean tevee commercials directed against the aforementioned Mr. Crist? And isn't Obama also sort of friendly with Crist? Or, at the least, isn't Obama  supposed to a "post-bitchy tevee commercial Democrat"? Yes, yes, yes I said yes I will yes. ERGO: "Obama's Florida Problem." [Obama's Florida Problem]