Whee! Let's Break Coffeemakers For Sean Hannity! Why? MORE LIKE WHY NOT!

I pulled an "Office Space" with my Keurig... Would be a shame if everyone else joined me in the Keurig Smash Challenge #BoycottKeurig #IStandWithHannity #SundayMorning pic.twitter.com/yEADeRC006

In what has to be the stupidest political protest this week (we'd say "of 2017," but there's still a month and a half for much more stupid), a whole bunch of Sean Hannity fans are showing their support for the smartest man on TV by smashing up their Keurig coffeemakers after the company announced it would pull its ads from Fox's Hannity Funtimes Shouty Hour. The company had been pressured by godless liberals to drop Hannity after his bizarre defense of Roy Moore, who is only an ACCUSED child molester. You'd better bet that videos like the one above, of a guy smashing a single-cup coffee machine he already paid for, will bring the company to its knees as surely as Starbucks was brought down by all the morons buying coffee and demanding the barista write "Merry Christmas" or "Donald Trump" on the cup.

It's almost as if these dipwads don't understand what a "boycott" is at all. But now they won't have shitty coffee this morning, thanks to their defense of Sean Hannity and Roy Moore, and what's better, they won't be filling up landfills with millions of stupid single-serving plastic coffee pods. Several other brands have pulled their ads from Hannity as well, but so far we haven't seen accused-pedophile supporters vowing to destroy their own DNA to stick it to the ads being pulled by genetic testing company "23 and Me."

There are at least some fun videos of people destroying their coffeemakers, which should definitely prove...something:

Liberals are offended by this video of a Keurig being thrown off of a building.

Please retweet to offend a Liberal.#BoycottKeurigpic.twitter.com/0qbHlmyqcA

Offended? Hardly. Laughing at is really different; you need to pay more attention.

There's also this noteworthy coffee activism, which should have a devastating effect on triggered libs and own them: 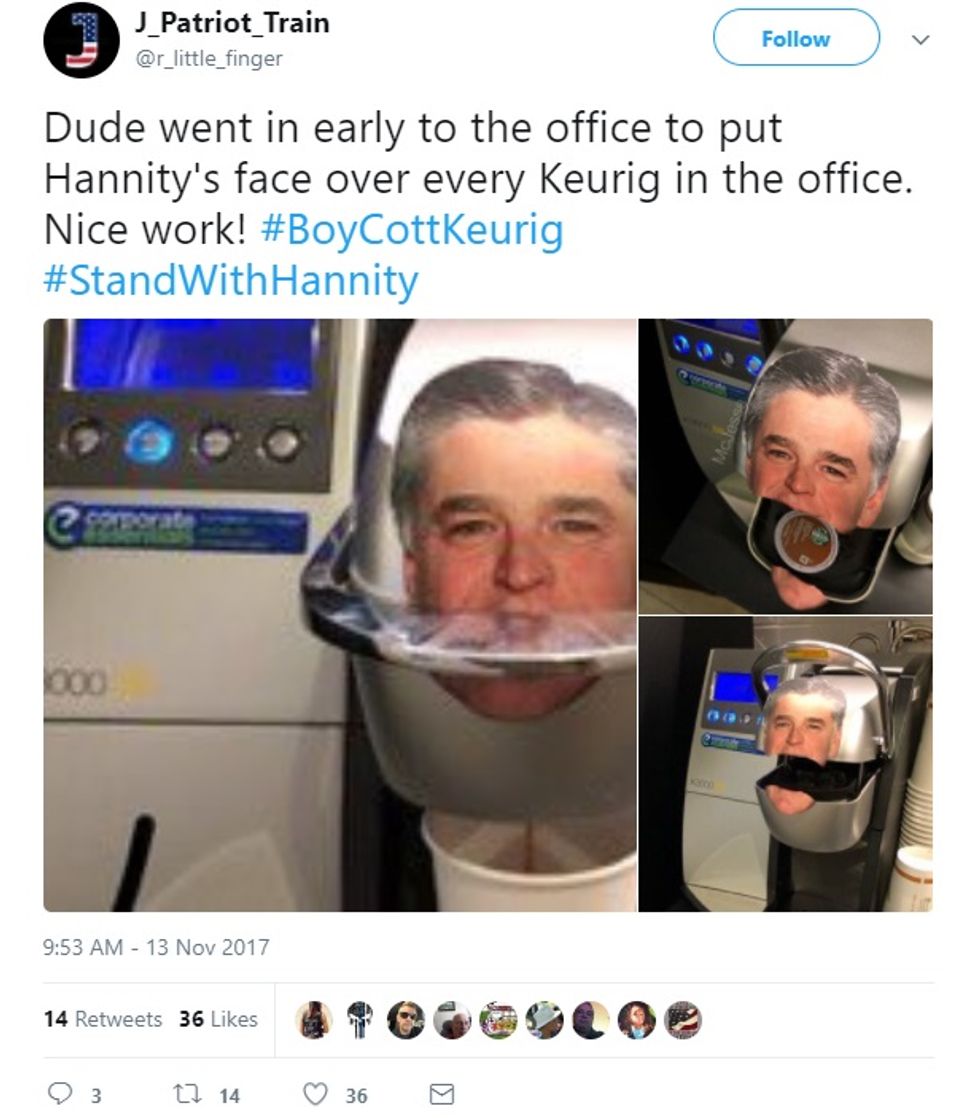 Some guy thought he was Daryl Dixon and shot his coffeemaker with a crossbow. Is America great again?

Dear Keurig, I have had some version of your product in my home for over 10 years, but guess what...THAT ENDS TODAY! Just as it is your freedom to choose where you advertise, it is also my freedom to be free from you. You side with MSM REPROBATE I can fix that! #BoycottKeurig pic.twitter.com/v0EOk5Mwsp

And finally, there's this manic insanity for people who want some good Patriotic gun-humping coffee:

Meanwhile, there's occasional Wonkette contributor Respectable Lawyer, who is warning rightwing coffee fans they might be substituting even worse dangers for Keurig: 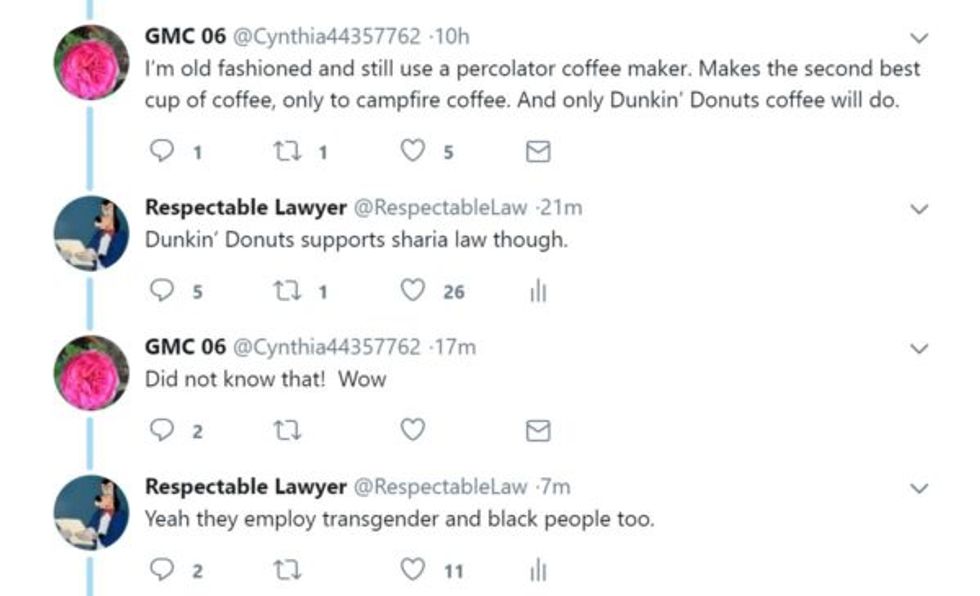 He also convinced a lady to call the maker of her other-brand coffee pods and ask them whether they support sharia law.

Some leftish folks have pledged to reward Keurig for its decision by buying their machines, but no, that is bad for the environment and also makes shitty coffee. We should be delighted that wingnuts are switching to less wasteful ways of getting their coffee.

And then there's the whole Deep Principle that's behind the boycott -- which isn't a boycott if you're smashing stuff you already bought, It really isn't working too well in the logic department: 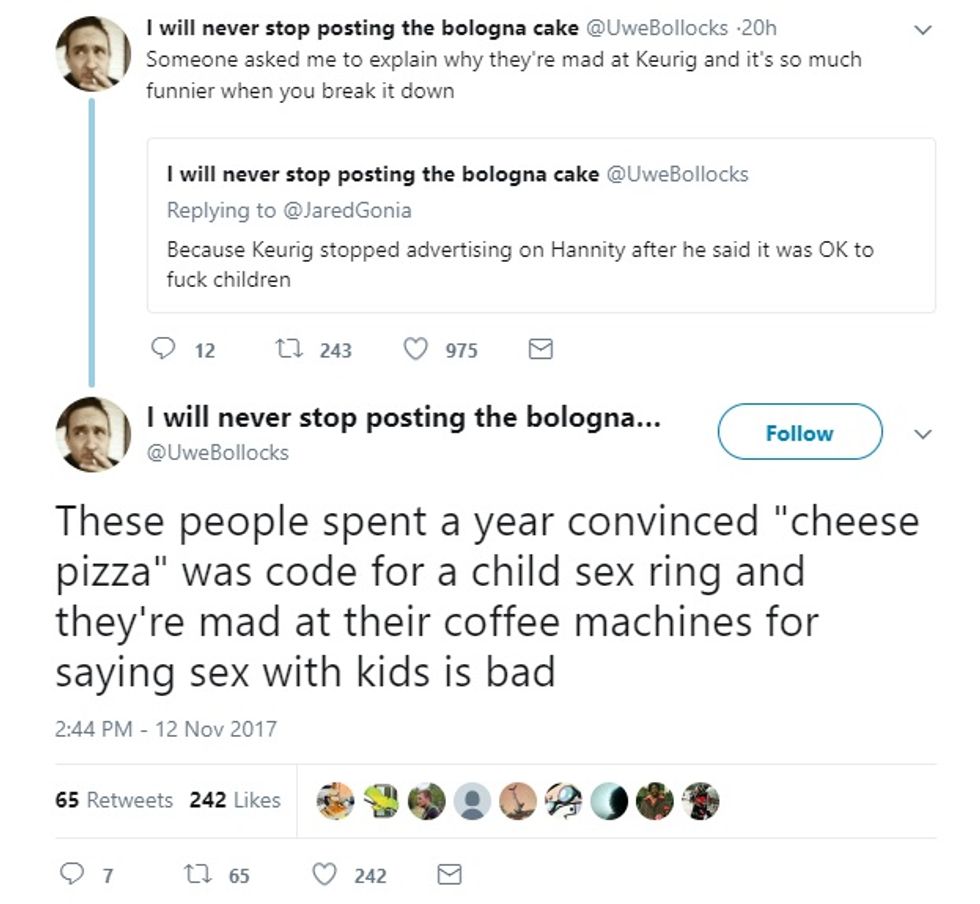 For its part, Keurig has pretty much fucked up its response to the coffee clash. Instead of saying "You're damn right we ordered the code red," CEO Bob Gamgort sent a memo to employees containing this retroactive ass covering: 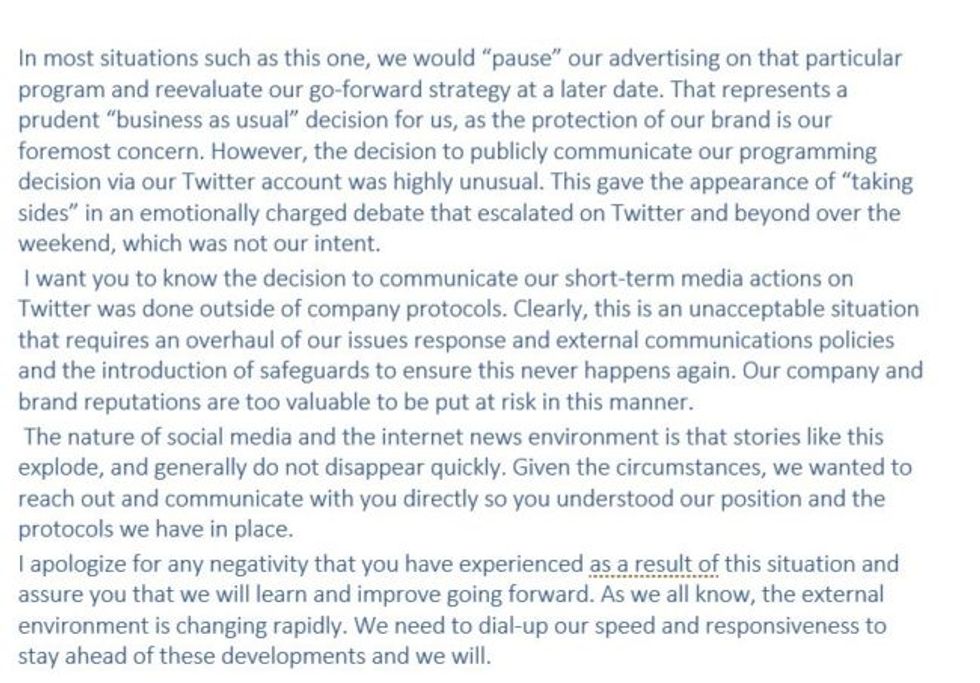 In conclusion, Keurig is terrible coffee, with packaging that's terrible for the environment, and we're delighted to see fewer wingnuts buying it. Don't tell, OK?

Now if we can just convince makers of plastic grocery bags to condemn Roy Moore, Hannity, and Donald Trump...

Keurig doesn't advertise on Wonkette because NOBODY advertises on Wonkette! And we like it like that! Help us keep it ad-free and answering only to YOU.

Trump Pardons Every Criminal He Knows, Which Is A Lot Of Criminals

Alan Dershowitz Peddling Anti-Semitic Conspiracy Theories To Breitbart, What Fun We Have In Hell!

Ted Cruz Was NOT OWNED. HE TOTALLY GOT IT, OKAY?