Which Game Of Thrones Character Is Steve Bannon? (Whichever Character Just Got Shitcanned) 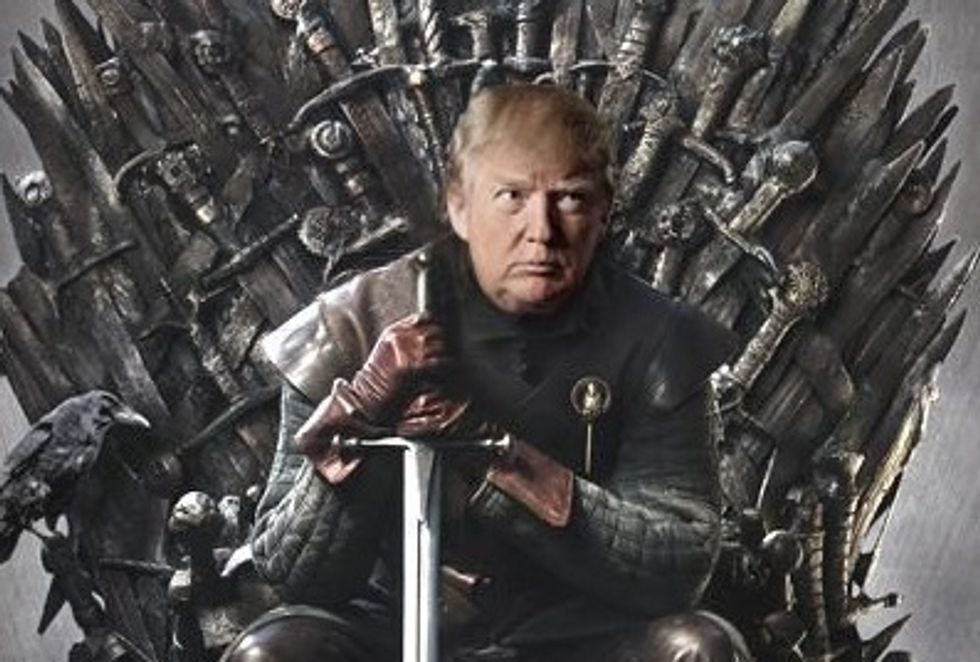 It's All Red Wedding, All the Time

Your Open Thread post is brought to you by this enigmatic tweet by Sarah Westwood, White House correspondent Washington Examiner ...

... and also this thing from Ben Shapiro, who darkly intones that vengeance is his, saith Steve Bannonth!

What are we to make of this? Mostly, that somebody close to Bannon is more than just a tad melodramatic! And that apparently he intends to halve people, with a sword!

Now since we do not actually watch Game Of Thrones, because we're either just too cool or just too lame, we're having a hard time deciding which character in the HBO fantasy hit Steve Bannon most resembles. They don't have any Uruk-hai, do they? Cause he'd be a good one of those, only one that's read enough to act like he's erudite. We're pretty sure he's not the hot dragon chick, and Peter Dinklage is too good an actor for Bannon to be anything like Tyrion Lannister (look, you don't have to watch a show to know things about it), who we guess is sort of a noble guy, or at least has his moments?

He might be the Game of Thrones character "Littlefinger," except that's ridiculous, because his former boss is the one with the stubby little hands.

If Bannon resembles anyone in Game of Thrones, it's clearly Baron Vladimir Harkonnen, the bloated schemer who has no scruples whatsoever in his quest to destroy House Atreides and control the spice that makes space travel possible. Plus, he's got the right complexion. Bring in that floating fat man!

It may be a stretch, but perhaps Bannon is the Game of Thrones character J.R. Ewing, a scheming bastard who'll stop at nothing in the pursuit of power. Plus, if Bannon ever got shot, just about everyone he ever met would be a suspect.

Bannon could definitely be the Game of Thrones character "The Joker," who thrives on chaos for the hell of it, and just wants to watch the world burn.

Or perhaps he's the Game of Thrones character Iago, who just does evil shit for no fucking reason at all.

Naw, we're joshing you. If we have to stick to Game of Thrones, and Winter really is here, then it's obvious who Bannon is: One of the Whites who got his Walking papers.

Please offer your suggestions for which Game of Thrones character Stephen K Bannon is. No need to limit yourself to characters actually in the show or the novels by J.R.R. Martin.

Or not, it's your Open Thread!

Yr Wonkette is supported by readers like you. Please click the "Donate" linky -- we won't blow your money on HBO.