Which Of These States Can Hate Ladies THE MOST This Week? 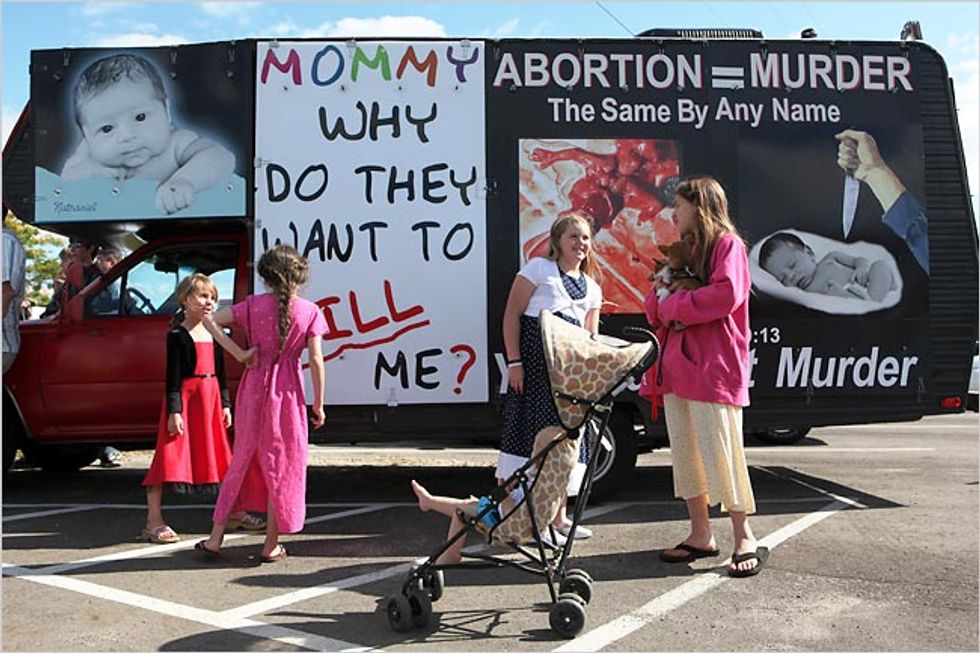 Hawkeyes, who just LOVE THE LITTLE CHILDREN, have been brainstorming ways to rid themselves of those Planned Parenthood Abortionplexes. Please indulge me in a little Wonksplainer for a second here. If numbers give you the vapors, just remember IT IS ALWAYS WORTH IT TO FUCK THE POOR IF YOU CAN MAKE A MEANINGLESS GESTURE TO YOUR CONSTITUENTS.

What with state governments treating women’s health care as a frivolous indulgence (AKA WhoreCare), Your Federal Government wants to give states every incentive to cover family planning. In fact, Big Gubmint will pick up 90% of the tab under the Medicaid Family Planning Network Waiver. The catch, if you’re a fundamentalist asshole legislator, is that you can’t exclude any qualified provider from the program. Which means that ladies are free to take their ladybits down to Planned Parenthood for services other than abortion, and the states pick up just 10% of the tab. Last year, Iowa ponied up a whole $300,000 for $3,000,000 of services. (Read all about this issue here.)

Sweet God of Ethanol and all that is Holy! This injustice will not stand! Those principled Iowa legislators voted last week to withdraw from the Medicaid Slut Waiver, so the Feds can piss off with that 90% subsidy. The bill passed the House easily and is headed for the Republican-held Senate. Governor Terry Branstad says he will sign it. Hosanna!

Naturally the Iowa Leg raised taxes to offset the additional spending incurred by withdrawing from this plan.

OH, BUT I KID. No, they’re taking the money out of a $15.5 million federally funded block grant for Social Services. Last year, those funds were largely allocated toward services for disabled adults and kids in foster care. Surely those vulnerable populations will be thrilled to pick up the tab on this one! Well played, Iowa.

The Republican US Senate hasn’t quite finished ratfucking the Supreme Court, so pre-viability abortions remain legal for now. This leaves the Arkansas legislature free to pass all the batguano insane bills they can think of, safe in the knowledge that the courts will overturn them. Beats governing, right?

This week, the Arkansas House passed the Unborn Child Protection from Dismemberment Abortion Act. If you can’t outlaw abortion, write a statute defining a fetus as a child and abortion as a dismemberment. Those courts will never know what hit ‘em! So clever!

Okay, so we’ve seen a million of these statutes before, and they’ve all been struck down. Make it a felony to perform second trimester abortion using the safest method, dilation and extraction (D&E), get overruled in court, pat yourselves on the back for your heroic efforts, run for reelection. Same shit, different day.

But Arkansas Representative Andy Mayberry (no, seriously!) has his eye on the Governor’s mansion, so he figured he’d need to add some extra sparkle to his version. His law grants the right to sue the doctor performing the D&E for injunctive relief and damages. Who has standing to sue to stop a D&E abortion? Well…

A cause of action for injunctive relief against a person who has purposely violated this subchapter may be maintained by:

(A) The woman who receives or attempted to receive a dismemberment abortion in violation of this subchapter;

(B) A person who is the spouse, parent, or legal guardian of the woman who receives or attempted to receive a dismemberment abortion in violation of this subchapter; or

(C) A current or former licensed healthcare provider of the woman who receives or attempted to receive a dismemberment abortion in violation of this subchapter.

The Arkansas General Assembly just approved a law that allows an adult woman’s husband, mother, father, her doctor the right to go to court and stop her from having an abortion. Does “former licensed healthcare provider” include your dermatologist? Does the podiatrist who fitted you for orthotics have a lifetime veto power over your healthcare decisions? Seems like it.

Guess who else has the right to get the court to stop abortion: Rapists. A woman who is raped by her husband, father or legal guardian can still by forced by her rapist to carry the child to term.

Now, Andy Mayberry knows that last part looks kinda bad. So he wants you to know that rapists won’t have access to monetary damages when they sue the doctors. Rapists can force their victims to give birth, but they won’t get attorney’s fees or money for the pain and suffering they feel because their victim chose to abort. So, we’re all good then?

NOTHING IS GOOD. HOLY FUCKING SHIT WHAT IS HAPPENING TO OUR COUNTRY?!?!?!

This statute violates settled law in about a dozen ways, but it still passed the Arkansas House and Senate. Even if Governor Asa Hutchinson signs, though, courts will immediately invalidate it. It’s just legislative wankers wanking, spilling their seed on the ground and hoping for a big round of applause.

So, I’m going to award today’s Hate Off prize to Iowa, who may well succeed in depriving thousands of disabled adults and vulnerable kids of services just to prove their point about Planned Parenthood. If only they would stick to jerking off.

Holler at me in the comments. And go donate to Planned Parenthood!