Which Trump Staffer Said This Pervy Shit To MSNBC's Katy Tur? Oh, Probably ALL OF THEM KATY 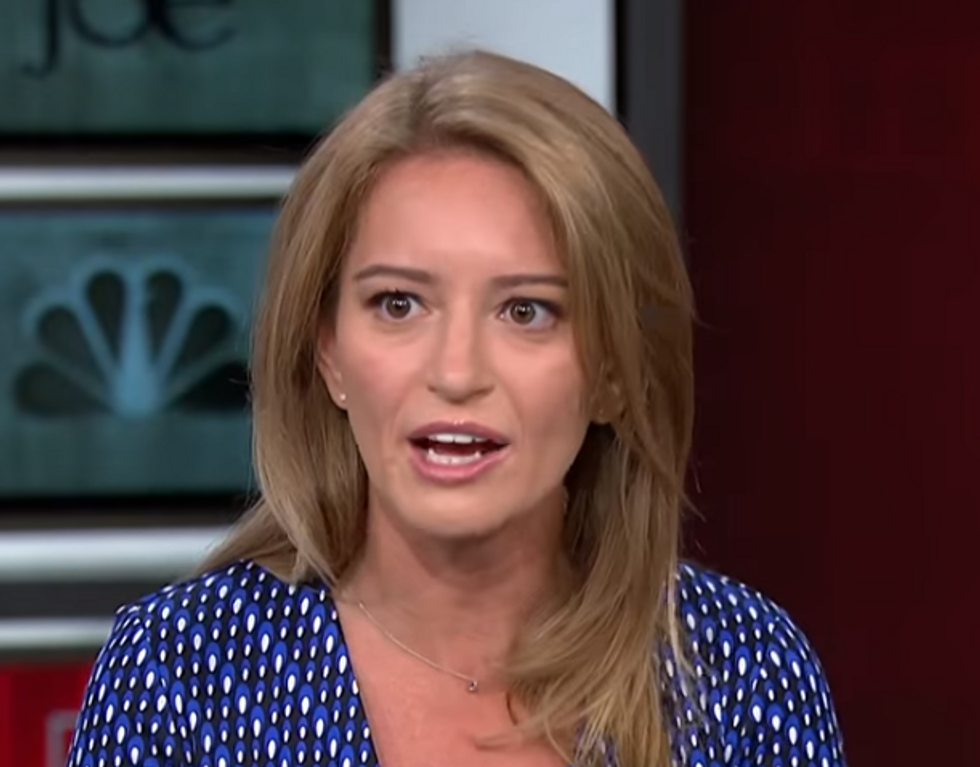 We are appalled too, Katy.

Uh oh, excerpts from amazing MSNBC person Katy Tur's new book (buy it here! We did!) keep coming out, and OH THEY ARE SALACIOUS. She is really telling some stories about the Trump campaign here! On Tuesday, we were shocked and appalled and furious to learn that Donald Trump, who verbally abused Tur on a regular basis at his campaign rallies, also tried to grope her face with his mouth one day on the "Morning Joe" set, because he pops in a Tic-Tac, he just can't help it.

Check out this gross story about UNNAMED MARRIED MAN TRUMP CAMPAIGN GUY, who was gross toward Tur in an indirect way, but was mostly just a gross pig man who sought her advice on where to get some adulterous lady strange at a campaign stop. After you read it, we will get out our Glenn Beck white board and connect the dots and figure out who it was!

Uhhhhhh ... sorry Katy Tur doesn't have the inside scoop on where to find some pussy since your wife and kids aren't around but anyway, bye!

And the leery, gross remarks about how she gets sweaty sometimes and the other inappropriate text messages? Gotta be this guy, right?

Is that it? Did Corey Lewandowski say he knows how sweaty Katy Tur probably gets, and thus needs some towels to dab herself? He fits the profile. Married with four children, generally a gross human being who obviously thinks he is hot shit. Alison Hardy, did your husband do the nasty things in Katy Tur's book? Does that sound just like him?

UNLESS! Unless it was this guy:

NOOOOOOOOOO. That is too gross. It cannot be Jason Miller, unless he was doing that thing where, because he was an unfuckable dork in high school, now he was acting out like some BMOC because he was MISTER TRUMP CAMPAIGN GUY, not realizing he was still just some unfuckable troll thing.

But wait! It would have had to have been early in the campaign, because by fall, Miller was busy doing trustfalls and bangin' stankies and makin' love babies with A.J. Delgado. Jason Miller wouldn't betray the trust of his wife and his campaign mistress that way, probably.

We can eliminate Mike Pence, who calls his wife "Mother" and is not allowed to cavort with opposite gender humans all by himself. He wouldn't have said he was going to be "chief of staff" anyway.

The actual chief of staff ended up being Reince Priebus, but we are just not buying that it was he for some reason.

It could have been Michael Flynn, married to Lori and father to #Pizzagate Junior!

His tongue is hanging outta his mouth and everything! But nah, his kids are grown and he was too busy being a literal actual foreign agent to grab them by the pussy probably. Same reasoning goes for why it probably wasn't Paul Manafort -- except for how The National Enquirer, America's most greatest journalism periodical, claims he is a GROSS SEX PREVERT WITH MISTRESS LADY, so that reasoning doesn't actually work at all, now that an editor is looking at this post. (We are just pointing this out for accuracy.)

LET'S THINK OUTSIDE THE BOX, because there's this one Trump campaign person who reproduces like a rabbit and is definitely stupid and gross, and his name is StinkyJizz McFaceBad Junior:

Junior, did you constantly text Katy Tur and ask her to lead you to sexxxy extramarital naughty-naughty? Are you dumb enough that you thought your dad might make you his chief of staff? Hahahahahaha, of course you are, but "Corey Lewandowski" is still totally the answer we are probably looking for.

It wasn't Eric Trump, because he had not yet spawned during the campaign. His first baby was just borned! Congratulations, Eric and Lara! Hope it got Lara's face!

We can see this guy gin-grunting at Katy Tur and thinking he might end up chief of staff, but his recent marital history doesn't line up with "happy wife at home":

WAIT A SECOND. Is it possible that the dude's exact quotes were more along the lines of, "Would you like a nice cool towel to wipe off your lady unmentionables? Where can I meet a looker like you to take back to my cabin for some squirrel-grillin' and romance-creatin'?" Does his sex face look like this, maybe?

OK look, Donald Trump surrounds himself with the literal worst human beings in all of America, so the answer to which Trump campaign person tried to slime all over Katy Tur and the innocent female residents of whatever city Trump happened to be in that day could easily be ALL OF THEM KATY.

But we still gotta go with Corey Lewadowski, because fuck that guy. Feel free to recommend good divorce lawyers for his nice wife in the comments, which are not allowed.