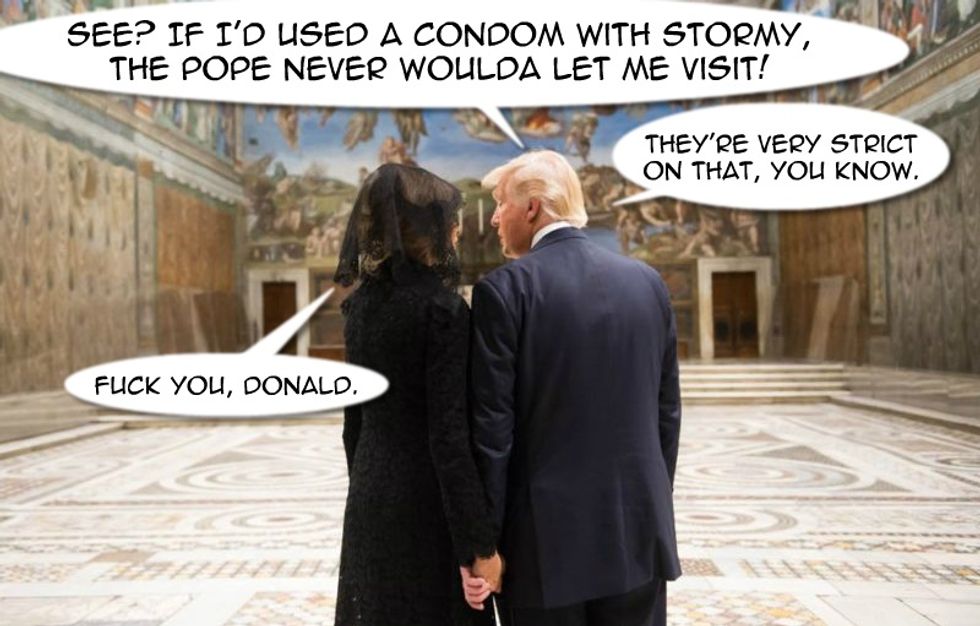 'I just thank God I don't have to eat fish on Friday, know what I mean?' 'FUCK YOU, DONALD!'

The White House issued this very faith-based tweet Wednesday to remind everyone that Tuesday was "National Religious Freedom Day," so you should go out and do something religious, in freedom, like refuse to bake a cake for homosexuals or tell a slut who wants to fill a prescription for birth control to drive across the county to another pharmacy. Can't you just feel the quiet sanctimony radiating off your screen?

We're not entirely sure why the White House wanted to remind anyone of the Trump's visit to the Vatican, which didn't go so great in the first place.

We suppose it was the only set of pics White House Staffers had handy to accompany their dumb puff piece promoting -- a day after the event -- Trump's proclamation recognizing the whole Religious Freedom thing. The Trumps did attend Christmas Eve services in Florida -- Melania said it was a "tradition" for them -- but Donald Trump isn't big on God stuff otherwise, except for how the Bible is his favorite unread book and so he's very big with the Evangelicals.

In the proclamation Trump surely had entirely nothing to do with writing, the President declared it's just haaaaaard to even be a Christian in today's America:

Unfortunately, not all have recognized the importance of religious freedom, whether by threatening tax consequences for particular forms of religious speech, or forcing people to comply with laws that violate their core religious beliefs without sufficient justification. These incursions, little by little, can destroy the fundamental freedom underlying our democracy. Therefore, soon after taking office, I addressed these issues in an Executive Order that helps ensure Americans are able to follow their consciences without undue Government interference and the Department of Justice has issued guidance to Federal agencies regarding their compliance with laws that protect religious freedom. No American — whether a nun, nurse, baker, or business owner — should be forced to choose between the tenets of faith or adherence to the law.

In keeping with that sense of religious grievance over having to provide health insurance for harlots and being prevented from casting out sodomites, the Health and Human Services Department is starting a new "conscience and religious freedom division" to help protect the inalienable rights of pharmacists who don't want to fill prescriptions for dirty, dirty hoors. (The unboring Wonkette version of this story is here.) HHS already has an Office for Civil Rights to protect the rights of patients and providers, but that was clearly insufficient since it didn't specify religious rights for the Religious Right. And what religious freedoms will the new outfit protect?

“We think the Trump administration should set an example in enforcing the multiple conscience laws that have been passed since the 1970s to prevent the government from punishing people who have objections to participating in abortions,” said David Christensen, vice president of government affairs at the Family Research Council.

For some reason, a bunch of crazy liberals seem to think this new division will be aimed more at denying medical treatment to women and homosexxers and trans folks than at actually protecting religious freedom. But if the devout don't have the freedom to make sinners suffer, then can they be said to be free? Truly, if medical personnel are forced to give healthcare to icky people who God wants to punish, Ghost Thomas Jefferson and Baby Jesus will be very sad indeed.

Now say your prayers here in the comments, for this, your OPEN THREAD!

Yr Wonkette is supported by readers like you! Please click here to support our freedom to worship at the temple of Jim Bacchus, God of Cheap Booze.