Who Are America's Worst Politicians Today? All Of Them! 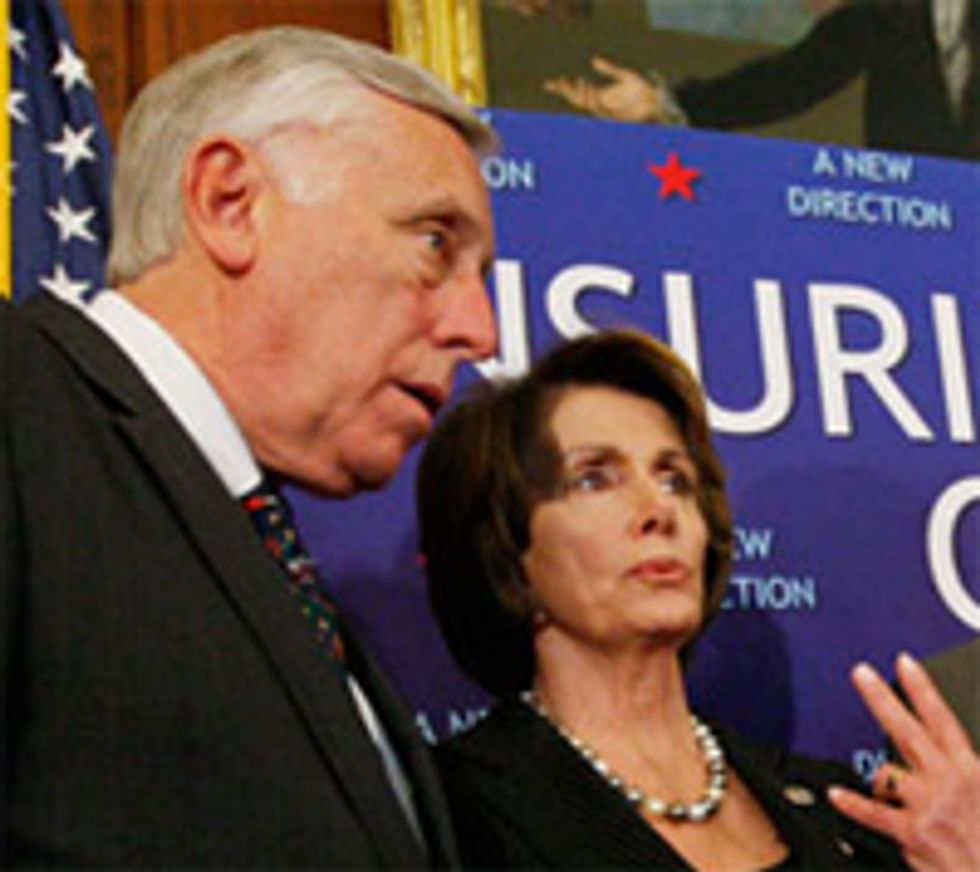 Dearest Wonkette readers. Now would be an appropriate time to grab a drink and reassess the value of, you know, representative democracy as an effective form of government at all. If you've been watching CNN for the last couple of hours... well, we're right there with you. Oh god CNN is now looking at Internet comments to get more opinions on the Death Of The Bailout. INTERNET COMMENTS. We want forty guns right now with which to shoot furniture, appliances, alley cats and, most importantly, our own human selves. Let's run through a list of the comically pathetic ways in which our American political leaders are "responding" to the failed bailout vote. Hint: very few people are blaming themselves!

Immediately after the vote, the House Republican leadership held a press conference, and it was a doozy! In some countries at some point in world history, you might expect the adult leaders of the party that just shot down a bipartisan compromise to come out and say "Hey, you know what, the motherfucker fell, so we'll go and work on it and come back with a little sump'm sump'm later, kapish?"

But these are no ordinary adults. One might call them "great whores of Babylon" instead. Or, simply, "children."

Minority leader John Boehner claimed that he *thought* he had another 12 votes from his caucus, which would've resulted in a 217-216 passage of the bill. It was all set to pass! But then, NANCY PELOSI GAVE A MEAN SPEECH before the vote. Said Boehner -- whose last name famously sounds like some sort of fancy German erection -- Pelosi's speech "poisoned our conference and caused a number of members we thought we could get go south." Well since that's a shocking amount of horseshit, we can assume that Boehner never had the right number of votes and is a failed American leader.

But what did Nancy Pelosi say? Here's some video which we watched for 30 or so seconds before crying:

Here are some excerpts for those of you who shared our reaction:

When was the last time someone asked you for $700 billion? It is a number that is staggering, but tells us only the costs of the Bush Administration's failed economic policies--policies built on budgetary recklessness, on an anything goes mentality, with no regulation, no supervision, and no discipline in the system.

Today, we will act to avert this crisis, but informed by our experience of the past eight years with the failed economic leadership that has left us left capable of meeting the challenges of the future. We choose a different path. In the new year, with a new Congress and a new president, we will break free with a failed past and take America in a New Direction to a better future.

Now let us be clear: no one has any sympathy whatsoever for the poor baby House Republicans who pretended to be "hurt" by this speech.

But Nancy: Why are you so terrible? WTF? Was this speech really necessary? Hack hack hack hack hack, spit. This method -- tying all Republicans everywhere to George W. Bush right before a tenuous vote -- is not exactly how one woos on-the-fence Republicans. It is pretty amazing how much Nancy Pelosi sucks at being House Speaker.

BUY CANNED GOODS. And then throw them at the Capitol. It will be kind of funny, just canned goods laying everywhere. But be sure to pick them up after like an hour, because you'll need them.