Who Are The Obamas Insulting By Attending Mandela's Funeral? 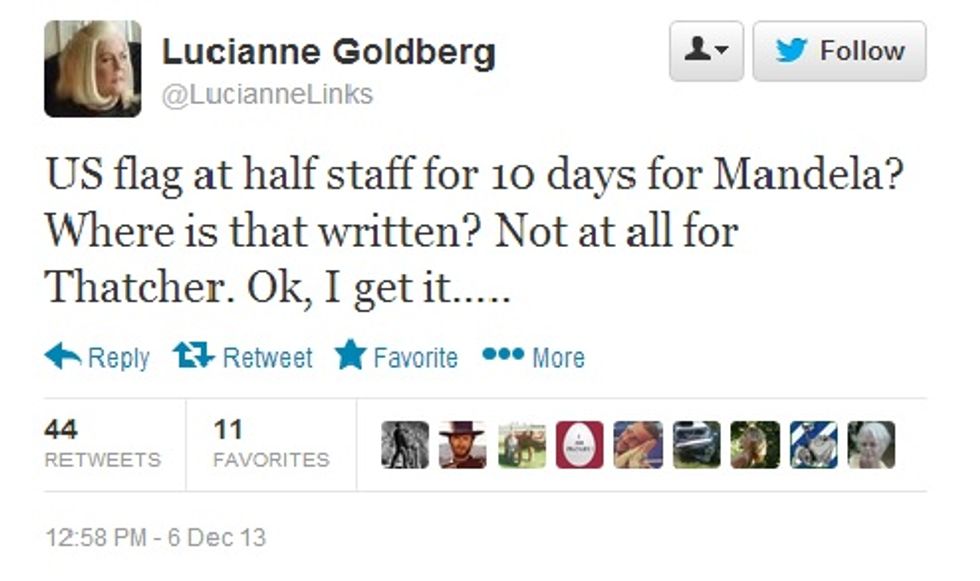 You kind of figured this had to be on the way: Internet wingnuts are now complaining that by honoring the memory of Nelson Mandela, Barack Obama is retroactively insulting other people, conservatives especially. This is only logical. For instance, Dead Breitbart's Home For Scabies-Afflicted Dingos has a lengthy piece about the horrible, horrible slur that this is to our Best Ally Ever, because the Preznit did not attend the funeral of Baroness Margaret Thatcher. Instead, the official delegation was headed by a couple of nobodies named James A. Baker and George Schultz, which was a slap in the face to the memory of the woman who Kept The Falklands Free. And how do we know this was an epic diss? Why, from the British tabloids that whined about it, of course. And also from the well-known fact that Barack Obama so hates colonialism that he hollowed out that bust of Churchill to use as a urinal.

Are some funerals of certain former world leaders more important to attend than others?

We would venture to say, based on careful consideration and a look at the historical record, the answer is, "Are you fucking kidding?" Let us recall that Saint Ronald Reagan himself dispatched his veep, George H.W. Bush, to so many state funerals that the joke in 1992 was that Bush was a strong foreign policy candidate because he'd met lots of world leaders, though they weren't necessarily breathing. And would Breitbart simply say, "ah, well, we must treat all leaders equally" if Obama had attended not only Thatcher's funeral, but also that of Hugo Chavez? We are only asking. And finally, it might also be worth asking: Just how many newly free nations did Margaret Thatcher lead?*

Then we have this poutrage from "marketing guru" Tom Geldner:

We'd just like to point out that this is not the only insult to history Obama is guilty of. For instance, today is the anniversary of the ratification of the 13th amendment, the completion of the Washington Monument, the Roosevelt Corollary to the Monroe Doctrine, the first heart transplant performed in the US, and, let us not forget, it is also the anniversary of the Stones concert at Altamont. Have you seen Barack Obama marking any of these events? If we were Teddy Roosevelt, we'd start hanging with the Hells Angels over this slap in the face.

And finally, there's this whine from Lucianne Goldberg, promoter of the "Clintons killed Vince Foster" myth, who knows a thing or two about how to honor the dead:

Where is that even in the Constitution, we want to know! Actually, socialist government radio NPR notes that the last time flags were lowered to half-staff for a foreign leader was 2005, for Pope John Paul II. So we guess Obama thinks JP II was a black communist, too?

*And no, we don't mean "free from the tyranny of efficient government-run railway systems."