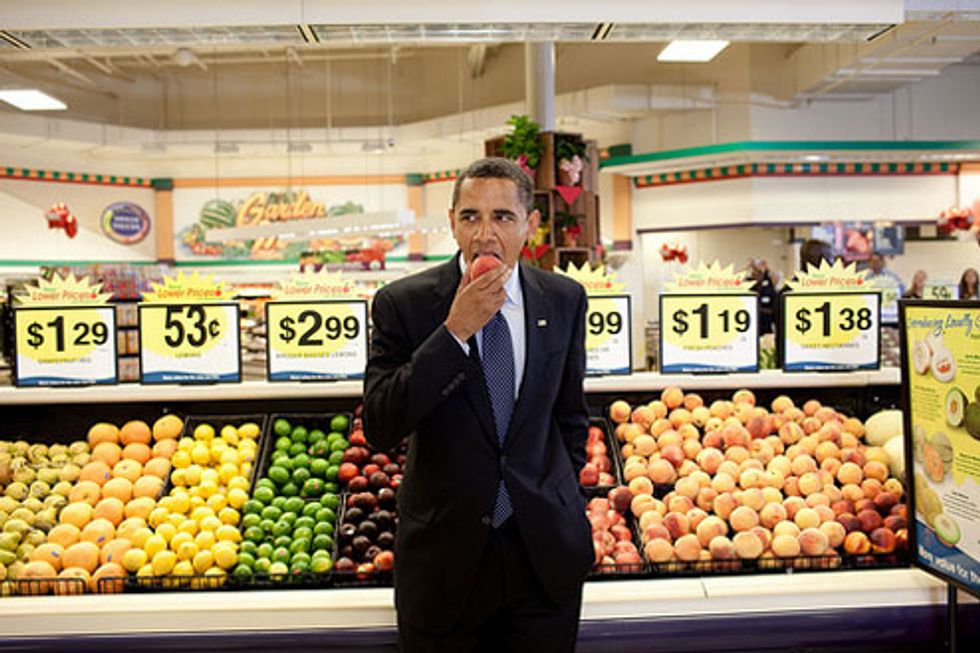 Stop the recycled paper presses, Whole Foods is gouging its customers! Wait, we knew that, didn't we? Yes. We mean, more than we even knew! According to an EXCLUSIVE report by NY Daily News, the New York Department of Consumer Affairs has been watching the sneaky way grocery stores throughout the city, especially Whole Foods, have been free marketing customers, with inaccurate labels:

The most recent spate of violations came during a sting operation the Department of Consumer Affairs conducted in the fall that specifically checked the accuracy of the weight marked on pre-packaged products.

Inspectors weighed 80 different types of items at Whole Foods’ eight locations in the city that were open at the time. They found every label was inaccurate, with many overcharging consumers, agency spokeswoman Abby Lootens told The News.

Naturally, Whole Foods spokesguy Michael Sinatra says the whole thing is a misunderstanding, and the Department is just plain wrong, but in case it is not wrong, it was A Accident, and Whole Foods "never intentionally used deceptive practices to incorrectly charge customers." Since 2010. For nearly a hundred products. In eight different stores. But nah, it definitely was not part of sinister corporate scheme to make the hipster Birkenstock crowd pay even more of their whole paychecks than they are already happy to pay. Except:

A source familiar with the investigation said a Whole Foods store employee told a DCA inspector that the mislabeled prices were ordered by corporate honchos.

Whole Foods Market is paying $800,000 in penalties after an investigation found the supermarket chain overcharged customers throughout California. [...]

Problems included failing to deduct the weight of containers when ringing up fresh food, putting smaller amounts into packages than the weight stated on the label, and selling items by the piece instead of by the pound, as required by law, the statement said.

Probably just a coincidence. Or another A Accident, that happened a whole bunch of times. Whole Foods would never intentionally treat its customers like a bunch of suckers who will pay any price for fancy food from the fancy store, much of which they could buy at non-fancy stores for non-fancy prices, but shopping at Whole Foods makes them feel good about themselves. Even though it shouldn't because Whole Foods co-founder and co-CEO John Mackey is a climate change denier who once said Obamacare is "like fascism." Oh, and also some years back, some yokels who don't shop there anyway complained that Whole Foods was doing terrorism by selling Halal-certified food during Ramadan, so stores received an email from headquarters to SHUT IT DOWN, PEOPLE, don't wanna "highlight Ramadan in signage in our stores as that could be considered ‘Celebrating or promoting’ Ramadan."

So yeah. You're probably getting screwed by Whole Foods, even harder than you thought, but if you shop there, you probably deserve it.