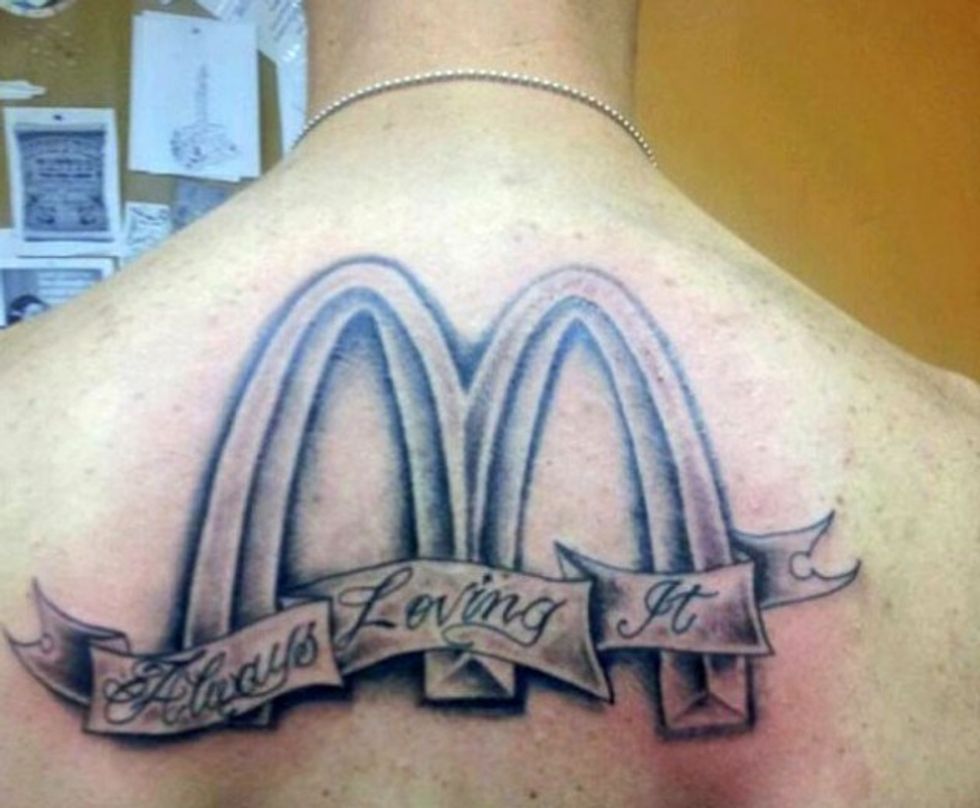 Another week and another chance to celebrate the accomplishments and examine the needless suffering of our favorite Corporate Persons.

Thanks for fighting our stupid wars, millennials. Here's another tattoo parlor

Are you interested in a tattoo like some common Rock and Roll person? Great! Because you can get that ink AND an array of nut butters at Whole Foods’ new chain of “365 Stores.” These shops are opening soon along the west coast in places with high concentrations of nut butters and tattoo parlors.

In an attempt to lure millennials, the 365 Stores might feature tattoo facilities, record shops and outdoor patios. Because millennials love the outdoors. Why is this happening? Whole Foods has been discouraged by the lack of millennial attention to their stores and they’re angling for a piece of the next young adult who sells an elk-photographing app for $300 million.

But how about this, Whole Foods? Maybe most millennials can’t shop at your place because of stagnant wages and unconscionable debt. You should know this, considering all of the millennials you employ at shit wages.

[contextly_sidebar id="ormhi1q4d5UxhZpH7LX7rwAoz76NJEV8"]This isn’t Whole Foods’ first attempt at micromarketing. Recent news about fraudulent price manipulation likely earned the appreciation of many soulless speculators. And who can forget the whole “shrimp processed by child slaves” thing, which can be spun as a subtle enticement aimed at cackling Libertarian manboys. But don’t forget the rest of us, Whole Foods! Considering the ubiquity of tattoos on anyone under 50, Whole Foods could do itself a favor by including a tattoo removal area for Gen X’ers with that old Blind Melon or astrology-related bodywork. That one's on the house.

You may remember a nervous-looking man named Tim Geithner. As Treasury Secretary, he helped navigate America through capitalism’s murky discharge following the Financial Crisis of 2008. Known for his coziness with the dons of Wall Street, “Timmy” parlayed his government experience into a position with private equity firm Warburg Pincus in 2013.

Geithner, who used to “regulate” and TARP all over JPMorgan Chase, just secured a $12 billion line of credit from the bank. Now the man who was probably embarrassed by his years of government service and his mere millions in net worth will have the opportunity to act like your average John and Jamie Wall Street Exec, and invest this bit o’ cash into a Warburg private equity fund. Things might finally start looking up for young Mr. Geithner. Send Timmy a note of congratulations. Perhaps ask if you can buy in as well. And don’t forget to list Yr Wonkette as Yr Beneficiary in case “something happens.”

Marc Andreesen is a very rich dude who sits on Facebook’s Board of Directors. After India’s government shut down part of Facebook’s “Free Basics” program, Andreesen took to Twitter, which is always a smart move when you're upset. After some scrub users (who probably don’t even know this guy was an initial twitter.com investor) compared Facebook’s heavy-handed efforts to influence Indian regulatory apparatus to colonialism, Marc was done with pussyfooting around like a man with cat feet. He zinged:

“Anti-colonialism has been economically catastrophic for the Indian people for decades. Why stop now?”

While we're sure there was nothing in it for Facebook to bring (allegedly) better internet to a country with a billion people, let’s set aside Zuckerberg’s benevolent “like” factory for a moment. Andreesen is talking some racist smack like he’s some stupid chump hanging in D’Souza’s prison visiting room and not some venture capitalist savant. Use better code, Marc. Post a pic of a British colonial soldier and his superior weaponry. Talk about India's bloated bureaucracy and crazy income inequality while ignoring any historical and causal relationships. Be vague. Something like, “Isn’t it strange that, ‘He who does kind deeds becomes rich’ is a Hindu proverb?” You can be a better douchebag. In closing, we will not comment on the shape of Andreesen’s head because we’re better than that.